The halfway mark in the 225-member Karnataka Assembly is 113 but elections were held for just 222 seats and so any party or alliance will need 112 seats to form a government in the state. 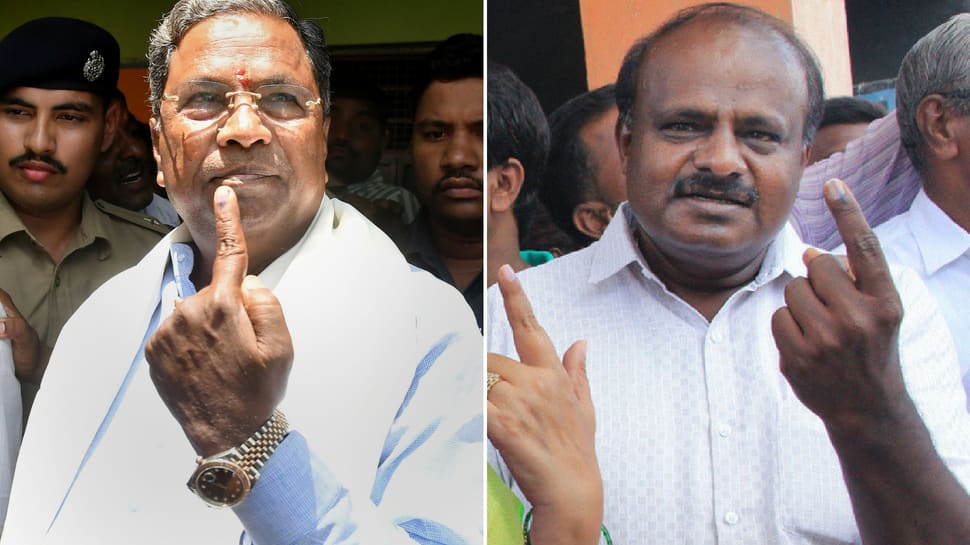 Even as the Congress has come second best in Karnataka Assembly elections 2018, the party is still in with a chance to form a government in the state if it joins hands with the Janata Dal Secular (JDS) of former prime minister HD Deve Gowda. While the Bharatiya Janata Party (BJP) with 105 seats has emerged as the single largest party, it is still short of the halfway mark of 112. On the other hand, the Congress and JDS have bagged 77 and 38 seats respectively, giving the two a total of 115 which is well above the halfway mark.

The halfway mark in the 225-member Karnataka Assembly is 113 but elections were held for just 222 seats and so any party or alliance will need 112 seats to form a government in the state. If Congress and JDS enter into a post-poll alliance, then they can very well deny the BJP a chance to form a government in the state in spite of the latter finishing within a striking distance of the halfway mark.

Sources have told Zee Media that former Congress president Sonia Gandhi has spoken to Deve Gowda. She also asked her close confidant Ghulam Nabi Azad to tell the JDS leadership that Congress was ready to accept JDS leader and Gowda's son HD Kumaraswamy as the next chief minister of Karnataka.

Two senior Congress leaders Ashok Gehlot and Mallikarjun Kharge have already expressed similar sentiments that their party was open to allying with the JDS to form a government in the state. "We will discuss the issue with the high command. I am going to meet Ghulam Nabi Azad and Ashok Gehlot and we will discuss the issue of alliance with JDS," said Kharge on Tuesday morning after it became clear that the BJP will end as the single largest party in Karnataka.

However, the JDS is yet to open its cards on its future course of action. The party is way behind at the third spot and its only chance of being in power is if it allies with either the BJP or the Congress. The BJP is short by just a few seats of the majority mark and is unlikely to entertain any tough conditions which the JDS is certain to put forward. In such a scenario, the Congress may prove to be much easier customer to deal with for JDS bosses Deve Gowda and his son HD Kumaraswamy.

The Congress has not declared incumbent Siddaramaiah, who on Sunday stated that he would welcome a Dalit CM if his party so desires, as its chief ministerial candidate. The JDS will in all probability put forward the condition that Siddaramaiah should not be picked as the CM face as he had in 2006 quit the party and joined the Congress after Deve Gowda started to project his son HD Kumaraswamy as his heir apparent.