Cyclone Ockhi had on Friday intensified into a severe storm and was rapidly moving towards the Arabian Sea, leaving a trail of destruction on its path. 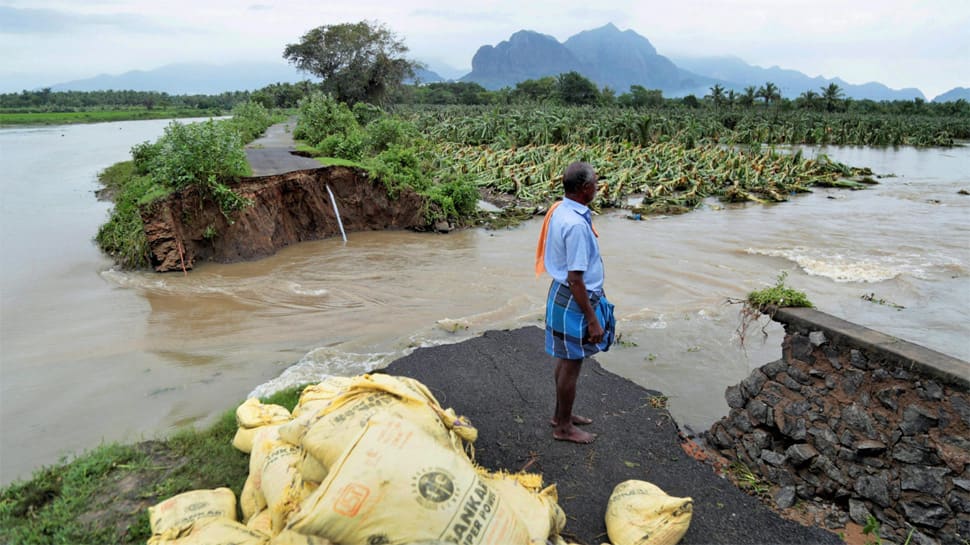 Over 60 fishing vessels from Tamil Nadu and Kerala were asked to dock at a port in Maharashtra on Saturday as the menacing Ockhi made their return journey unsafe.

A total of 68 vessels, of which two from Tamil Nadu and 66 from Kerala, with nearly a 100 fishermen onboard, were asked to dock at Devagad port in Maharashtra's Sindhudurg district as the storm gathered strength.

Seventy-one fishermen have already been rescued and brought to the port, while 97 others are still at sea, the ANI reported.

The coastguards are currently searching for the stranded vessels in the sea.

The Maharashtra government is providing shelter, food and other relief materials to the stranded fishermen who have already arrived at the port.

Thanks Hon.CM @Dev_Fadnavis for understanding the sense of urgency in this matter of fishermen reaching Devagad minor port, Maharashtra.These fishermen from near Calicut, Kerala were caught in #CycloneOckhi. Grateful to CM who agreed to help immediately. @Kummanam @santhoshbjp

“I’ve given orders to Maharashtra Maritime Board and the Sindhudurg district Collector to make all arrangements for the stranded fishermen. Local authorities are already with them and taking care of all arrangements to make everyone feel at home,” Fadnavis said in a tweet.

I’ve given orders to Maharashtra Maritime Board and Collector, Sindhudurg dist to make all arrangements for the stranded fishermen.
Local authorities are already with them and taking care of all arrangements to make everyone feel at home! https://t.co/Eh7U2smtco

Cyclone Ockhi had on Friday intensified into a severe storm and was rapidly moving towards the Arabian Sea, leaving a trail of destruction on its path.

The death toll rose to 12 on Saturday even as the search and rescue operations in the sea continued with the help of the navy and the Coast Guard.

Kanyakumari and Tirunelveli districts in Tamil Nadu and Calicut district in Kerala were the worst hit where hundreds of people have been affected.

Meanwhile, the Kerala government is preparing a memorandum for the Centre to declare Cyclone Ockhi as a national calamity.

Kerala Chief Minister Pinarayi Vijayan said the chief secretary has been entrusted to prepare the memorandum in this regard.

Earlier in the day, Prime Minister Narendra Modi had assured all help to the affected people in the states. He also reportedly called Tamil Nadu Chief Minister K Palaniswami to assure him all assistance from the Centre to deal with the crisis.

He told Singh that Kanyakumari and Tirunelveli had suffered the worst damage, and detailed the relief work being carried out in "full swing" there, a release said.

The state government requested the Centre to deploy helicopters of the Indian Navy and Coast Guard to search and rescue missing fishermen, mostly from Kanyakumari.

In Kanyakumari, power supply had been restored even as efforts are on to resume power supply in neighbouring areas like Nagercoil and Kuzhithurai.

Palaniswami has announced Rs 25 crore for expediting relief and restoration work in the district.

Kanyakumari, besides Tirunelveli, had borne the brunt of Ochki cyclone, which uprooted hundreds of trees and crippled normal life.

The Coast Guard rescued 198 fishermen and 18 fishing boats of Tamil Nadu off the Western coast.

According to an official release, 18 fishing boats and 198 fishermen from Tamil Nadu have taken shelter in the Lakshadweep and Minicoy Group of Islands (western coast).