"If someone talks of a separate PM for Jammu and Kashmir, then we'll have no option but to abolish Article 370  and 35A." 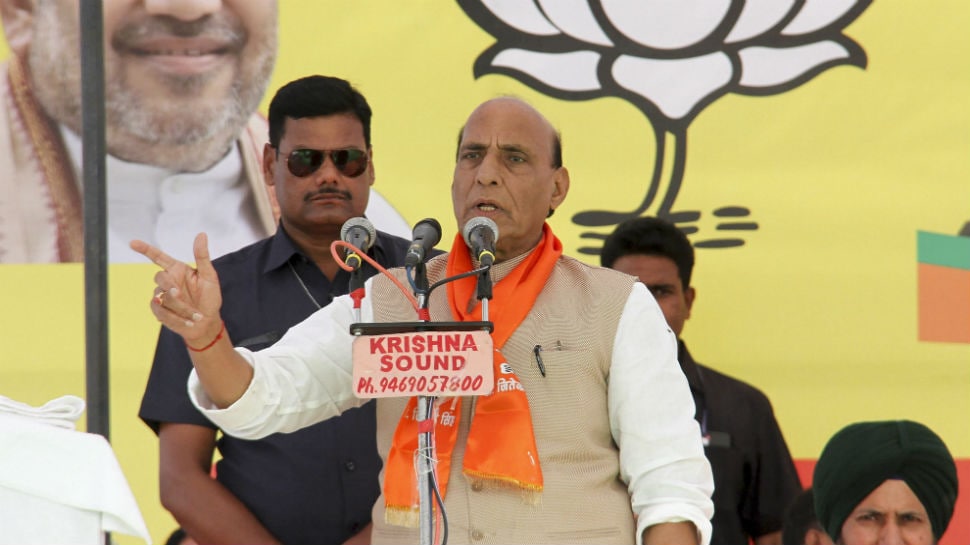 Suchetgarh, Jammu and Kashmir: Shortly after the Bharatiya Janata Party released its manifesto for Lok Sabha 2019 election on Monday, rival parties converged to claw out possible flaws in it. Prominent among them were Mehbooba Mufti of PDP and Omar Abdullah of National Conference, only for them to be rebuked by Rajnath Singh immediately after.

What irked Mufti, Omar and also National Conference President Farooq Abdullah about the BJP manifesto was the promise of abrogation of Article 370 and annulling Article 35A if voted to power. Former CM Mufti, who was previously in alliance with BJP, warned that if the promise was fulfilled, the entire country - along with Jammu and Kashmir - would burn. (Read full report here)

Countering her and the two NC leaders, Rajnath took a rock-solid position on the matter even as he shifted the blame itself on to them. "People who led Jammu and Kashmir as CMs for a really long time say there should be a separate PM for the state. If someone talks of a separate PM for Jammu and Kashmir, then we'll have no option but to abolish Article 370  and 35A," said the Union Home Minister, clearly referring to Omar's previous comment on a separate PM and President for the state.

Article 370 and Article 35A of the Constitution provide special status to Jammu and Kashmir. These are also frictional points between state parties in J&K and the BJP at the Centre. Mufti had previously said that J&K's relation with India will end if terms and conditions of its accession altered.

Meanwhile, the war of words continues unabated between BJP, PDP and NC with even Congress trying to dab into J&K politics by promising in its manifesto that AFSPA - special powers given to armed forces in disturbed states - would be reviewed if the party is voted to power.