Congress has slammed PM Modi for his comments on ex-PM Rajiv Gandhi. 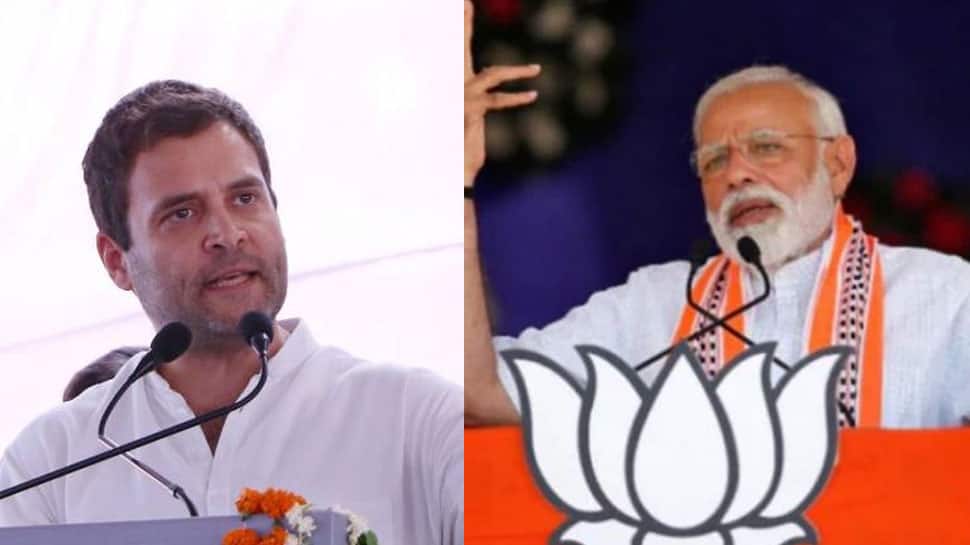 NEW DELHI: Congress chief Rahul Gandhi on Sunday reacted to Prime Minister Narendra Modi's attack on his late father Rajiv Gandhi asserting that the bitter electoral battle is almost over and his fate will be decided soon.

"Modi Ji, The battle is over. Your Karma awaits you. Projecting your inner beliefs about yourself onto my father won't protect you. All my love and a huge hug. Rahul," the Congress chief said in a tweet on Sunday.

Rahul Gandhi was responding to PM Modi's blistering attack on late prime minister Rajiv Gandhi, who he referred to as ''the corrupt no. 1.''

The battle is over. Your Karma awaits you. Projecting your inner beliefs about yourself onto my father won’t protect you.

All my love and a huge hug.

Facing blatant attacks by the Congress leadership over a host of issues, PM Modi had on Saturday said that Rahul Gandhi's father and former prime minister Rajiv Gandhi "ended his life as a 'bhrashtachari' (corrupt) number one.''

"Your father was termed 'Mr Clean' by his courtiers, but his life ended as 'bhrashtachari no 1','' PM Modi had said at a rally in Uttar Pradesh.

The PM Modi was apparently referring to the allegations of corruption levelled against Rajiv Gandhi and the then Congress government in connection with the purchase of the Bofors guns during the 1980s.

It may be recalled that Rahul had some times back taken the entire nation by surprise when he hugged the PM during a debate in Lok Sabha.

Rahul's sister and the party's eastern UP in-charge, Priyanka Gandhi, too reacted to PM's statement and sought to remind the BJP of its core theme of nationalism in this election.

"The PM, who is seeking votes in the name of martyrs, yesterday disrespected the martyrdom of a nobleman. People in Amethi will give a befitting reply... Rajiv Gandhi gave his life for the people of Amethi. Yes, Modi ji, this nation never forgives deception," Priyanka said in a tweet in Hindi.

PM Modi's comment on late Rajiv Gandhi has not gone down well within the Congress party, which has accused Modi of stopping to the lowest levels in attacking his rivals.

Reacting to the issue, top Congress leaders including Anand Sharma, Sam Pitroda and P Chidambaram today reminded that Rajiv Gandhi, who was assassinated in 1991, had got a clean chit from the court.

The court said there was no evidence that he accepted bribes, senior Congress leader P Chidambaram said in a tweet.

"Mr Modi has crossed all limits of propriety and decency by defaming a man (Rajiv Gandhi) who died in 1991," Chidambaram said in a tweet.

Addressing an election rally in UP, PM Modi had on Saturday accused the SP, BSP and Congress of "trampling upon" principles for gaining power, and said that they were so obsessed with poll arithmetic that they treat people merely as vote banks.

The PM continued his 'mahamilawat' (grand adulteration) jibe at the opposition alliance and predicted that the bonhomie between the parties fighting the BJP together was short-lived.

They will be at each others' throat after May 23, when Lok Sabha poll results will be declared, the PM said.

"The SP, BSP and Congress are the biggest examples of how principles are trampled upon for power. They are so affected by the bad habit of getting their vote bank arithmetic right that they consider people just numbers," PM Modi said.

Bihar: 82 candidates in fray from five seats in fifth phase of Lok Sabha poll on Monday