Hyderabad, May 24 (PTI) The surprise surge of BJP in Telangana dented ruling Telangana Rashtra Samithi's vote share by nearly six per cent in the Lok Sabha elections, giving a jolt to the regional party.

The Congress improved its tally to three, while AIMIM retained one seat with its President Asaduddin Owaisi winning from Hyderabad for the fourth successive time.

The BJP had suffered a humiliating defeat in the Assembly elections last December, winning just one seat and forfeiting deposits in more than 100 constituencies. 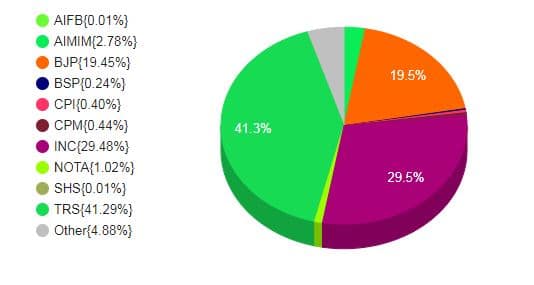 The TRS had returned to power with a rich haul of 88 seats in the 119-member House.

The K Chandrasekhar Rao-led party, which got a whopping 47.47 per cent in the Assembly polls four months ago, now saw its vote-share declining to 41.29 per cent in the April 11 Lok Sabha elections.

The Congress vote share was 29.49 per cent in the Parliamentary elections.

The Rahul-Gandhi-led party, along with alliance, mustered 32.32 per cent in the Assembly polls held last December.

The BJP, TDP, YSRCP and AIMIM shared one each.

BJP had then contested the polls in alliance with Telugu Desam Party.

Former union minister Bandaru Dattatreya was the only BJP candidate who won in the state in 2014.

He secured Secunderabad seat, which was retained by senior leader G Kishan Reddy this time.

In a shocker to TRS, the Chief Minister's s daughter and sitting MP K Kavitha lost in Nizamabad by 71,057 votes to BJPs D Arvind, a new entrant in politics.

Nizamabad had become the cynosure of all eyes in the Lok Sabha polls in Telangana as 185 candidates, including 177 farmers demanding a remunerative price for turmeric and red sorghum and setting up of a Turmeric Board, had jumped in the poll fray.

Independent analyst Professor Nageshwar said six per cent vote share difference is a big dent to the TRS within six months of coming to power.

"Reduction of Congress (vote-share) may not have contributed to BJP. But it is TRS which lost its share to BJP. Losing six per cent is huge for any political party," Nageshwar told PTI.

BJP stood in second position in terms of number of votes polled in Hyderabad and Mahabubnagar with over three lakh.

In three other constituencies (Medak, Chevella and Hyderabad) other than the four segments where it won -- the BJP polled over two lakh votes.

He also said the ineffective campaign by Congress in some constituencies also led to the upsurge of BJP.

BJP MLC N Ramachander Rao said it is the first time that BJP won four seats in the state.

Earlier in the undivided Andhra Pradesh, it got four seats-two each in Telangana and Andhra region.

Another notable victory for the BJP is that of B Sanjay Kumar in Karimnagar, where he defeated TRS deputy floor leader in Lok Sabha B Vinod Kumar by nearly 90,000 votes.