BJP's sankalp patra vs Congress manifesto: Promises made by the two national parties

The BJP sankalp patra comes days after the Congress released its manifesto on April 3. 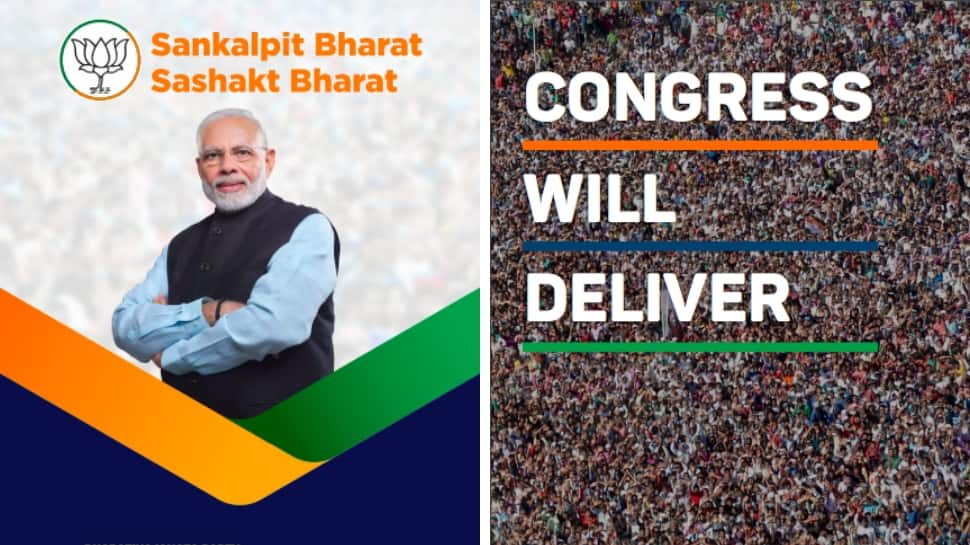 The Bharatiya Janata Party (BJP) on Monday released its 'sankalp patra' for the upcoming Lok Sabha election laying focus on national security, women issues, infrastructure among several others. It also laid focus on a string of promises, including expeditious construction of a Ram temple, dealing with terrorism firmly and doubling farmers income in the next three years. The manifesto titled 'Sankalpit Bharat, Sashakt Bharat' (Determined India, Empowered India) was released by Prime Minister Narendra Modi in the presence of BJP chief Amit Shah and other top leaders, including Rajnath Singh, Sushma Swaraj and Arun Jaitley.

The BJP sankalp patra comes days after the Congress released its manifesto on April 3. Congress chief Rahul Gandhi while releasing the manifesto, titled 'Congress will deliver', had said that it is based on five key ideas, reflecting the party symbol (hand). The Gandhi scion had said that the manifesto reflects the voice of the people and not just one man's view.

Here is what the two parties talk about 5 key issues concerning the country:

The BJP in its vision document vows to double the income of farmers by 2022 and the creation of 10,000 new Farmer Producer Organizations. It has also said that it aims to ensure that maximum farmers get income support under the Pradhan Mantri Kisan Samman Nidhi Yojana. It has proposed a pension scheme for small and marginal farmers to ensure social security after 60 years of age as well as providing short-term new agriculture loans up to Rs 1 lakh at 0% interest rate for 1-5 years on the condition of prompt repayment of the principal amount.

Claiming that the agriculture sector has been driven into deep crisis in the last five years, Congress has promised to waive the outstanding farm loans. Congress has also promised to present a separate “Kisan Budget” to ensure priority to the issues affecting the agriculture sector. A permanent National Commission on Agricultural Development and Planning and Commission on Marginal Farmers and Agricultural Labour is also promised by the party. Congress has promised that if it comes to power, it will repeal the Agricultural Produce Market Committees Act and make trade in agricultural produce- including exports and inter-state trade - free from all restrictions and establish farmers’ markets with adequate infrastructure. It has also vowed to bring MGNREGA 3.0 ensuring an  increase in the guaranteed days of employment up to 150 days in cases where 100 days have been achieved in a block/district; Use of labour in the Waterbodies Restoration and the Wasteland Regeneration Missions; Building village-level assets such as primary health centres, classrooms, libraries etc.

2) BJP on Youth and Education:

The BJP aims to cover all the secondary schools under Operation Digital Board and enable investment of Rs 1 lakh crore in higher education through Revitalising of Infrastructure and Systems in Education (RISE). It has also promised to work towards increasing the number of seats in premier management, engineering and law institutes and establish at least one Atal Tinkering Lab in every block. Under a new 'Entrepreneurial Northeast' scheme, the BJP aims to provide financial support to MSMEs and for employment generation in northeastern states.

Congress on Youth and Education:

Congress promises that school education from Class I to Class XII in public schools shall be compulsory and free. Congress promises to double the allocation for Education to 6 per cent of GDP in the 5 years ending 2023-24 and Right to Education Act be brought to the fore critical deficiencies in the school systems across the country. It has also promised to introduce vocational training as a compulsory component of school education in Classes IX to XII. Focussing on higher education, the party has promised to establish more public universities in the country, especially in under-served areas. It said that it will entrust the Regulation, Grading and Funding of colleges and universities to separate organisations and provide The University Grants Commission or its successor with sufficient funds to make liberal grants to colleges and universities, based on need and merit. It vowes to establish more Institutes of Higher Learning in subjects such as medicine, engineering, commerce, management and pure sciences.

3) BJP on Infrastructure and Railways:

BJP vows to ensure a pucca house to every family, LPG gas cylinder connection to all poor rural households, 100% electrification of all households, piped cooking gas in major Tier 1 and 2 cities, toilets and safe and potable drinking water for all. It also aims to double the length of national highways. BJP has said that it will ensure 100 per cent waste collection under Swachh Bharat Mission to achieve ODF+ and ODF++ in cities and villages; ensure ODF status for all villages and cities; achieve 175 GW of renewable energy capacity; connect every Gram Panchayat with high speed optical fibre network. It aims to increase the number of operational airports to 150 for better air connectivity, increase port capacity to 2,500 MTPA. For Railways, it has promised conversion of all viable rail tracks to broad gauge by 2022, electrification of all tracks by 2022, building smart railway stations across India and Wi-Fi facility at major stations while building a dedicated freight corridor project by 2022.

Congress on Infrastructure and Railways

Congress has promised to augment the total length of national highways and increase the pace of construction and focus on improved design and quality, maintenance and accountability. It promises to modernise all outdated railway infrastructure and implement the new plan which meets international standards. It has promised to use sector-specific, tried and tested PPP models to increase the supply of these vital public goods. Congress has also proposed to formulate a policy on Clean Energy in existing power plants that use fossil fuels and promote Green Energy to enhance the share of solar and wind energy in the total supply of energy. It aims to enhance the availability of, and access to, electricity in rural areas by encouraging investment in off-grid renewable power generation with ownership and revenues vesting in local bodies.

It aims to establish 1.5 lakh health and wellness centres under Ayushman Bharat. It vows to set up 75 new medical colleges/ postgraduate medical colleges and work on target provisioning of telemedicine and diagnostic laboratory facilities at all health and wellness centres to ensure quality primary medical care to the poor at their doorstep. It aims to work towards increasing the number of childcare facilities threefold and ensure a drastic reduction in cases of tuberculosis while increase the doctor-population ratio to 1:1400. Under the POSHAN Abhiyaan, the BJP aims to reduce the malnutrition level as well as accelerate the rate of reduction of malnourishment.

Congress has promised to double the total government expenditure on healthcare to 3 per cent of GDP by the year 2023-24. It aims to vigorously promote and implement the free public hospitals-model to provide universal healthcare, expand the free Dial-an-Ambulance service, set up Trauma and Emergency Centres and expand child healthcare services. It aims to formulate a National Telemedicine Policy and implement the National Mental Health Policy. It has also vowed to better the doctor to population ratio, promote AYUSH, equip the network of primary health centres.

The BJP aims to work towards increasing female workforce participation rate and ensure justice for Muslim women by enacting the law against triple talaq. It said that it is committed to ‘Beti Bachao, Beti Padhao’ and provide accessible and affordable quality education to all women. It promises to ensure ample financial support for girls through out their education and subsidised education loans are provided for higher education. To ensure safe motherhood, it will work on schemes such as Pradhan Mantri Matru Vandana Yojana, Pradhan Mantri Matritva Suraksha Abhiyaan and Ayushman Bharat, we will focus on ensuring good quality, easily accessible and affordable maternal healthcare services for all women. Giving priority to women safety, it promises to provide forensic facilities and fast track courts to bring convicts to justice.

Congress promises to pass the Constitution (Amendment) Bill to provide for reservation of 33 per cent of seats in the Lok Sabha and State Legislative Assemblies in the first session of the 17th Lok Sabha and in the Rajya Sabha. It vows to amend the Service Rules to reserve for women 33 per cent of appointments to posts in the Central Government and promises a comprehensive review of the Sexual Harassment of Women at Workplaces Act, 2013. It also says that it will ensure a separate investigative agency to investigate heinous crimes against women and children. Women's security will be given more priority.