BJP's vote share in Haryana surges with victory on 10 seats

Chandigarh: The BJP's stupendous performance in Haryana, where it swept ten seats, saw its vote share surge in comparison to the 2014 Lok Sabha polls.

As per the data made available by the Election Commission, the BJP's vote share in the 2019 polls was nearly 58.02 per cent as against Congress' 28.42 per cent.

The Indian National Lok Dal, which was decimated, had a vote share of 1.89 per cent.

Among other parties, the AAP, which contested on three seats, had a vote share of 0.36 per cent while the share of the BSP, which fought eight seats, was 3.64 per cent. Share of NOTA votes was 0.33 per cent. 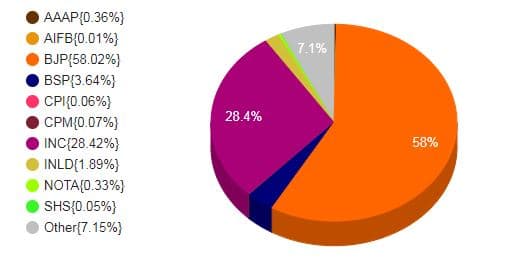 The AAP, which unsuccessfully contested all the 10 seats for the first time in 2014, had then got a vote share of 4.2 per cent.