Can't predict anything, I leave the decision to voters in Lucknow: Rajnath Singh

In Lucknow, Singh is up against Samajwadi Party candidate Poonam Sinha, who is the wife of actor-turned-politician Shatrughan Sinha. 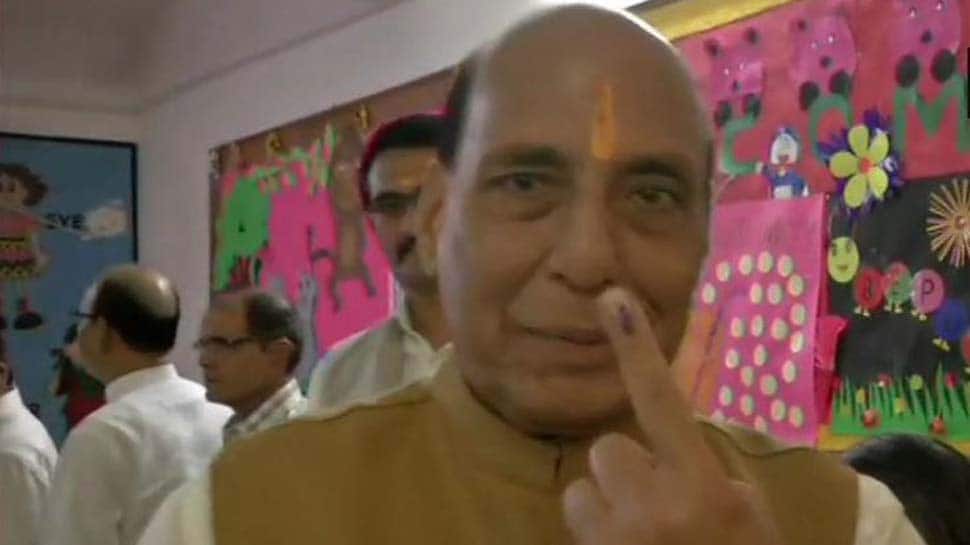 Home Minister Rajnath Singh on Monday cast his vote at a polling booth in Lucknow, nearly half-an-hour after voting began in the fifth phase of ongoing Lok Sabha election 2019.

In Lucknow, Singh is up against Samajwadi Party candidate Poonam Sinha, who is the wife of actor-turned-politician Shatrughan Sinha.

After casting his vote, Singh posed for the cameras and showed his inked finger. "I can't predict anything," said the Union Minister when media asked him about the outcome of the Lok Sabha election.

"I leave the decision to the voters in Lucknow. The people have the full right to choose who they want... In any case, Prime Minister (Narendra) Modi will become PM again," he added.

It is to be noted that Singh is seeking re-election from Lucknow. The seat is widely regarded as a stronghold of the BJP as it has been with the saffron party since 1991. BJP's Atal Bihari Vajpayee held Lucknow Lok Sabha seat from 1991 to 2009. Singh, who won from Ghaziabad in 2004 Lok Sabha, contested from Lucknow in 2014 for the first time and defeated Congress' Rita Bahuguna Joshi by a margin of over 2 lakh votes.

Voting for the fifth phase started at 7 AM in 51 seats across 7 states on Monday. The states where voting will be held on Monday are - Bihar, Jammu and Kashmir, Jharkhand, Madhya Pradesh, Rajasthan, Uttar Pradesh and West Bengal. A total of 8.75 crore voters will decide the fate of 674 candidates in the fifth phase.

Earlier on Monday, Prime Minister Narendra Modi tweeted requesting all those voting in the fifth phase to exercise their franchise in large numbers. PM Modi said that a vote is the most effective way to strengthen democracy and build a better future of the country. In his tweet, the prime minister once again appealed the young voters to cast their votes in record numbers.