The fresh list of three candidates was released by Mukul Wasnik, general secretary in-charge of te CEC of the Congress party.

According to the fresh list of candidates announced by the party, Yogesh Shukla has been fielded from Prayagraj, Chandresh Upadhyay from Domariyaganj and Bhal Chand Yadav (in place of Parvez Khan) from Sant Kabir Nagar.

The names of the candidates were finalised by the Central Election Committee of the Congress party during a meeting on Monday .

The fresh list of three candidates was released by Mukul Wasnik, general secretary in-charge, CEC of the Congress party. 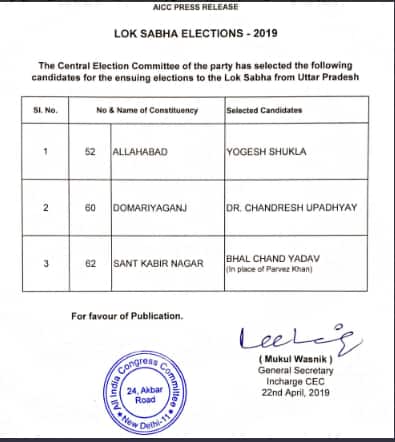 The party had in the morning announced a list of its six candidates for contesting Lok Sabha election 2019 from Delhi with former CM Sheila Dikshit being named from the North East Delhi parliamentary seat.

While Maken had finished a distant third from the same seat in 2014 Lok Sabha election, Dikshit had not contested because she was the Governor of Kerala at the time.

Congress had eventually lost in all seven seats.

The party has not named any candidate for the South Delhi seat as yet.

Over the course of the past several weeks, Congress was involved in talks with AAP over a possible seat-sharing arrangement in Delhi.

All seven parliamentary constituencies in Delhi will vote in the sixth phase on May 12.