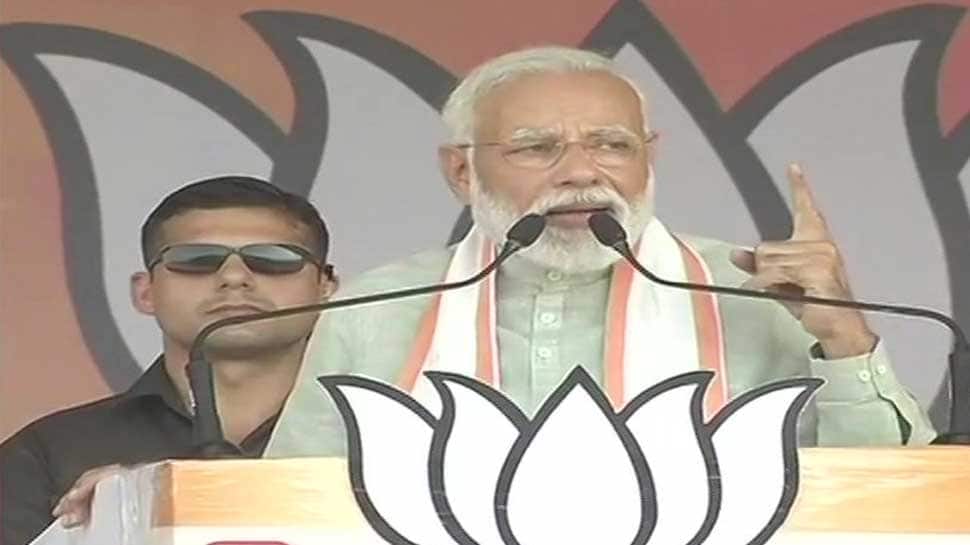 KHANDWA: Prime Minister Narendra Modi made a blistering attack on the Congress party on Sunday saying ''it hatched the 'Hindu terror' conspiracy to defame our religious heritage.''

The PM also hit out at Rahul Gandhi-led main opposition party over a host of issues including the 1984 anti-Sikh riots, the Bhopal gas tragedy, the weakening of country's defence mechanism and the blatant corruption during the previous UPA regimes.

"'Congress hatched the 'Hindu terror' conspiracy to defame our religious heritage,'' the PM said, according to news agency PTI.

While appealing to voters to back BJP for a strong and decisive government at the Centre, PM Modi said, ''I am campaigning with my good work, Congress and its allies contesting with falsehood and misdeeds.''

PM Modi made these remarks while addressing an election rally in the Khandwa district of Madhya Pradesh on Sunday.

During his speech, the PM also hit out at the Congress party for its casual approach to the 1984 anti-Sikh riots case, in which thousands of Sikhs were killed.

The PM was apparently referring to MP Chief Minister Kamal Nath, who is also believed to have also been involved in the 1984 riots.

''In Madhya Pradesh, one party has 2.5 chief minister. The administration doesn't even know whose orders are to be followed. Goons, murderers and dacoits have been given license here,'' the PM said.

It may be recalled the Sam Pitroda, the head of Congress party' overseas wing, had come under attack for his controversial statement on 1984 riots and since the PM and the top BJP leadership had been targeting the Congress party over the issue.

Congress had distanced itself from the controversy, saying it was ''Pitroda's personal opinion'' and cautioned its leaders to be extra careful while giving any statements on the sensitive issues.

Under attack from several quarters, Pitroda too apologised for his remarks on 1984 riots, saying, ''it was misrepresented and taken out of context.''

The Prime Minister also brought up the issue of national security, accusing the previous governments of weakening the intelligence agencies.

''Whenever the Pakistan-trained terrorists attacked, they (Congress) used to put innocent people behind bars in the name of an investigation,'' the PM said.

The PM had on Saturday came down heavily on the Congress, SP-BSP alliance in Uttar Pradesh for raising questions on his caste, asserting that he belongs to the caste of all poor countrymen.

''They have started a new thing about my caste,'' he said, in an apparent reference to Bahujan Samaj Party leader Mayawati's jibe that he is a ''farzi backward'' - a fake OBC leader.

''I want to tell them that Modi belongs to just one caste - whatever caste the poor belong to, I belong to that caste," he said, listing the schemes that his government has launched for them.

He said this while addressing election rallies in Sonebhadra and Jaunpur in UP.