"CWC held a collective deliberation on the performance of the party, the challenges before it as also the way ahead, instead of casting aspersions on the role or conduct of any specific individual."

New Delhi: The Congress has been in the eye of a massive storm after its shambolic showing in Lok Sabha election 2019. The Congress Working Committee (CWC) met behind closed doors on Saturday and there were reports that Rahul Gandhi offered to resign as president. The party, on Monday, however issued a statement and said that no speculations must be made regarding the meeting.

The statement appeared to defend Rahul against reports that he offered to resign but that party leaders attempted to convince him to reconsider his decision. The statement also said that challenges facing Congress were discussed. "CWC held a collective deliberation on the performance of the party, the challenges before it as also the way ahead, instead of casting aspersions on the role or conduct of any specific individual," it read. "Congress party expects everyone including media to respect the sanctity of a closed-door meeting of the CWC. Various conjectures, speculations, insinuations, assumptions, gossip and rumour mongering in a section of the media is uncalled for and unwarranted." 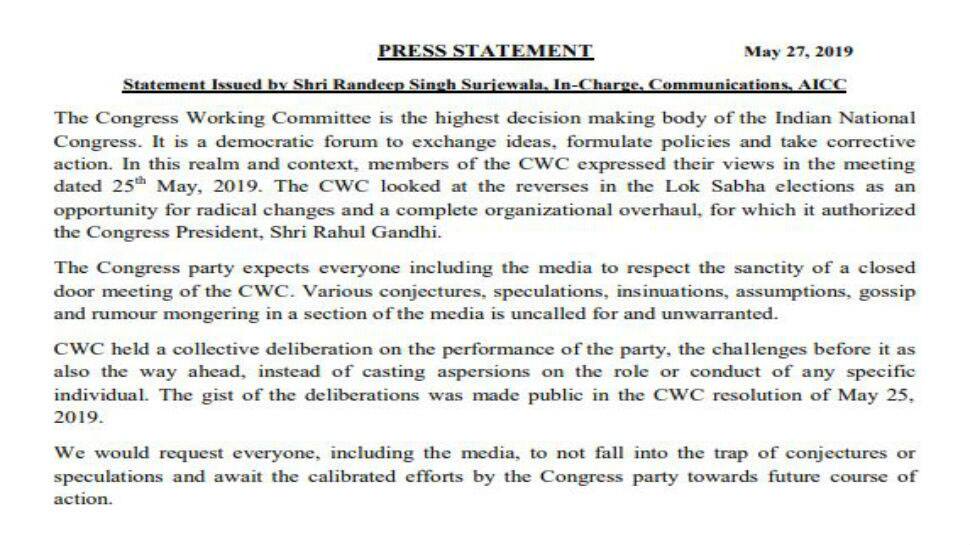 The statement from the Congress comes at a time when the party appears in free-fall, having won just 52 seats in Lok Sabha election 2019. The party faced outright rejection in almost every state. This has led to several state unit chiefs sending their resignations to Rahul. Rahul himself is learnt to have offered to resign as party president although this has not been confirmed by any of the Congress leaders present at the CWC. It was also reported that Rahul took a grim view of several top Congress leaders putting the interest of their respective sons over the interest of the party.

Congress has often been referred to as a party of dynasts by the Bharatiya Janata Party with PM Narendra Modi referring to Rahul as 'naamdar' and 'shehzada'.