A delegation of 21 opposition parties will meet in Delhi to discuss post-poll strategy. 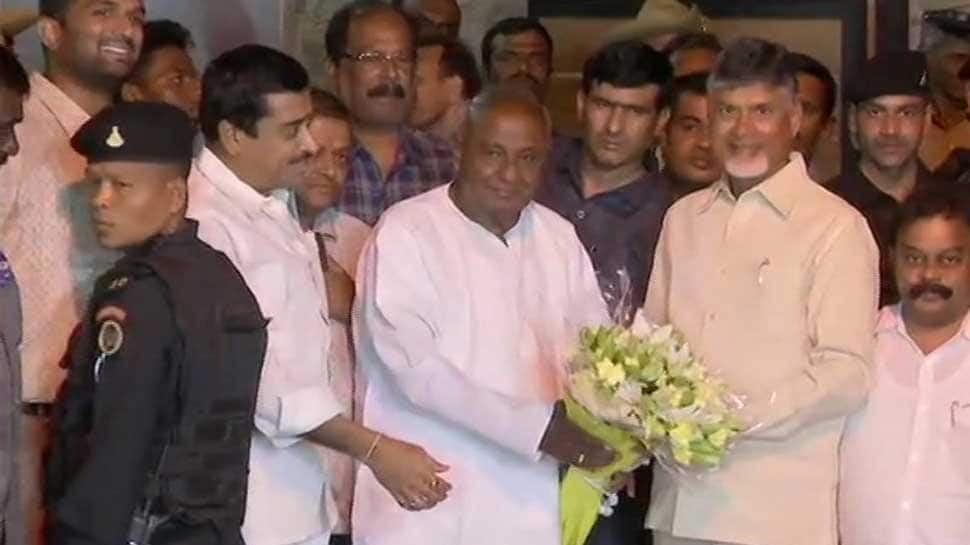 NEW DELHI: After a majority of exit polls showed that NDA would return to power for the second time, the opposition parties have lined-up meetings to strategise their plans to discuss the post-poll scenario. On Tuesday, a delegation of 21 opposition parties assembled at the Constitution Club in Delhi before heading off to meet the Election Commission officials. Meanwhile, BJP president Amit Shah is also set to host a dinner for NDA allies in the national capital. Sources say that the NDA will chalk out their post-election result strategy in the meet. Nitish Kumar, Uddhav Thackeray, Ram Vilas Paswan and many more NDA leaders are likely to attend the to do.

The seven-phase Lok Sabha election 2019 ended on Sunday, following which the exit polls were announced. Counting of votes will take place on May 23.

Thank you for joining us. Do come back again on Wednesday (May 22) for live updates of Lok Sabha election 2019.

Stay with us for the live updates on Lok Sabha election 2019:

# The 24 hour EVM Control Room will be made functional from tonight at Nirvachan Sadan to monitor complaints relating to polled EVMs, says EC.

# During NDA ministers meet, the PM likened his Lok Sabha election to a pilgrimage saying ''it stood out from other polls as it was being fought by the people and not the party alone.'' The PM also thanked the ministers for their work, Union minister Narendra Singh Tomar told reporters.

# BJP chief Amit Shah expresses confidence of NDA coming back to power during a meeting of the Union Council of Ministers. Shah congratulated the members of the 'Team Modi Sarkar' and said, "Let us keep this momentum going for a New India under the leadership of PM Narendra Modi."

I congratulate Team Modi Sarkar for their hard work and remarkable achievements in the last 5 years.

Let us keep this momentum going for a New India under the leadership of PM @narendramodi.

# Here are some more visuals of the NDA Minister meet in Delhi.

# In the memorandum, the opposition leaders have also demanded that if any discrepancy is found anywhere during the VVPAT verification, 100% counting of paper slips of VVPATs of all polling stations of that assembly segment should be done.

# Leaders of 22 opposition parties submit a memorandum before the EC with a request that the verification of VVPAT slips of randomly identified (05) polling stations should be done prior to the initiation of counting of votes and not after the completion of last round of counting.

# The aspersions in clips being used in media merely pertain to the storage or movement of reserve unused EVMs. However, any case of lapse even in the handling of reserve EVMs is thoroughly investigated and disciplinary action taken against the officers responsible, says EC.

# The provisions and protocols have been explained to the political parties on multiple occasions including in several of the 93 meetings held with them at the Commission since the announcement of elections: EC

# Complaints of alleged movement of EVMs, purportedly to replace polled EVMs in strongrooms, doing rounds in sections of media. Would like to unambiguously clarify that reports are absolutely false. Visuals seen viral on media do not pertain to any EVMs used during the polls: EC

# A meeting of Union Council of Ministers is scheduled to be held today at 5 PM at the BJP Office.

Delhi: A meeting of Union Council of Ministers to be held today at 5 pm at the BJP Office. pic.twitter.com/ewkjsnmUZV

# Former President Pranab Mukherjee issues a statement, says, ''Onus on ensuring institutional integrity in this case (security of EVMs) lies with the Election Commission, they must do so and put all speculations to rest.''

Former President Pranab Mukherjee issues statement, says ' Onus on ensuring institutional integrity in this case(security of EVMs) lies with the Election Commission, they must do so and put all speculations to rest' pic.twitter.com/2xFIhok7pN

# In the meeting of the Election Commission regarding the issue of MCC, it was interalia decided that proceedings of the meeting would be drawn including the views of all the poll body members. Thereafter, formal instructions to this effect would be issued in consonance with extant laws, rules.

# Deoghar: RJD and Jharkhand Vikas Morcha (JVM) workers stop a truck alleging that EVMs were being transported in boxes. SDO Vishal Sagar says 'All boxes are empty, the EVMs were already sent to Dumka for counting, you can check yourself'

Deoghar: RJD and Jharkhand Vikas Morcha(JVM) workers stop a truck alleging that EVMs were being transported in boxes. SDO Vishal Sagar says 'All boxes are empty, the EVMs were already sent to Dumka for counting, you can check yourself' #Jharkhand pic.twitter.com/7VIjOMb8L1

# BJP's stand on art 370 is not new. A party has its own stand but when there is an alliance, all of this is discussed. So there is no problem there: Bihar CM Nitish Kumar

# I feel the gathbandhan will get more than 60 seats in UP. BJP will be wiped off across the country. Exit polls will prove to be completely false, like it had happened before. Opposition will form a strong govt at the centre: Sanjay Singh, AAP after meeting SP chief Akhilesh Yadav:

# Sanjay Singh, AAP after meeting SP chief Akhilesh Yadav: Results will be declared after 2 days. We met to discuss the strategy to be followed after that. The first priority is to stop BJP, pair of Narendra Modi-Amit Shah & communal forces. This was also a courtesy call.

# The Election Commission has announced re-polling in one polling station under Kolkata North parliamentary constituency on Wednesday. The re-poll will be held at Sanskrit Collegiate School under the Jorasanko Assembly segment on May 22 between 7 am to 6 pm.

# Andhra Pradesh chief minister and TDP chief N Chandrababu Naidu, Nationalist Congress Party chief Sharad Pawar, Ahmed Patel and Ghulam Nabi Azad from Congress, TMC's Derek O'Brien, Satish Chandra Misra of Bahujan Samaj Party, Sitaram Yechury of the Communist Party of India (Marxist), D Raja of the Communist Party of India (CPI) along with representatives of Samajwadi Party and Rashtriya Janata Dal are expected to meet at 1.30 pm at the Constitution Club. The team will then head off to meet the EC officials at 3 pm.

# Exit polls have forecast that the BJP-led NDA will cross the majority mark of 272 in the Lok Sabha.