Congress workers and leaders have been working overtime to convince Rahul Gandhi to reconsider his decision to resign as party chief after a massive defeat in Lok Sabha election 2019. 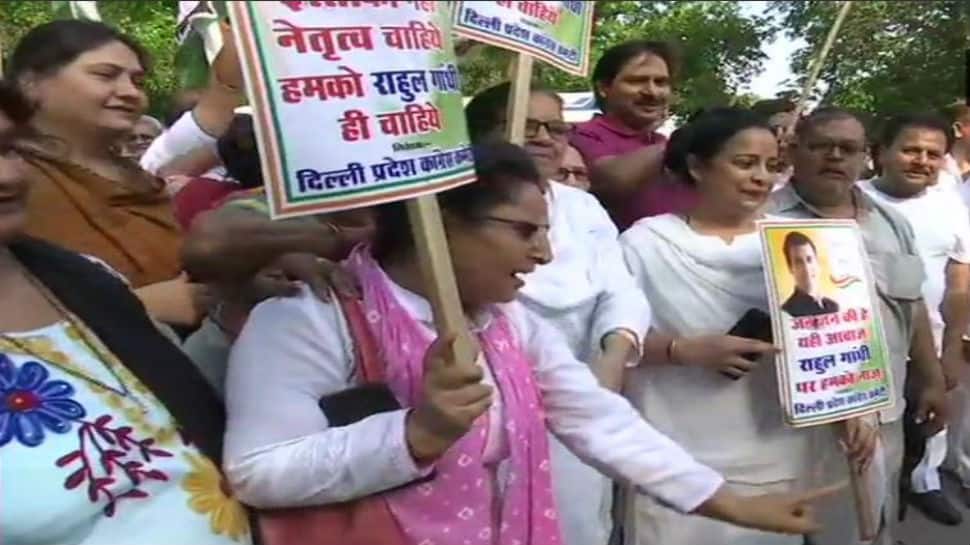 New Delhi: Congress workers and leaders have been working overtime to convince Rahul Gandhi to reconsider his decision to resign as party chief after a massive defeat in Lok Sabha election 2019.

Congress managed to win just 52 seats in the recently-concluded election, bowing out in several states - including Rajasthan, Madhya Pradesh and Chhattisgarh where the party had seized power in the Assembly elections last December. Taking moral responsibility for the defeat, Rahul had decided to step aside as Congress chief - a decision which has apparantly left party leaders and workers shocked. While in the days since Congress Working Committee meeting last Saturday, when Rahul expressed his wish to step down, several leaders have appealed to him against his decision, the party chief has reportedly remained firm. Even Congress allies like RJD's Lalu Prasad Yadav and MK Stalin have advised against such a move but their words have not had the desired effect.

On Wednesday, a day before Narendra Modi is to take oath for his second stint as the country's PM, Sheila Dikshit rushed to Rahul and appealed to him to re-think his decision. "I have given him the message that he should not resign. We want him to continue on his post, otherwise it will cause us pain. We have conveyed that to him," she said.

Around the same time, there were reports from Jaipur that Congress workers here had started a yagya (Hindu ritual with mantras) in an effort to make Rahul take back his decision to step aside as Congress chief. The yagya has been organised at the party headquarters here. Congress official Gopal Delwal told Zee News that the prayer ceremony will continue till the time Rahul abandons his decision to quit.

Congress leaders reaching out to Rahul with appeals, many reportedly pleading with him, and workers holding placards and performing religious rituals has made many question what Rahul's political achievements are to warrant such devotion and admiration. Critics have torn into Rahul for having limited political acumen which has only resulted in Congress now possibly facing an existential crisis. They, as well as political rivals, maintain that the only reason Rahul continues to be at the helm of Congress is because of his surname and family background and that the frantic appeals against his decision to step aside betray the blind devotion to dynasty within Congress.

Rashtrapati Bhavan gets decked up for Narendra Modi's swearing-in ceremony