While Narasimha Rao campaigned on the economic reforms that his government had undertaken in the last five years, the Bharatiya Janata Party talked about Hinduism and against the government's stand on foreign investment appealing for restrictions on them. 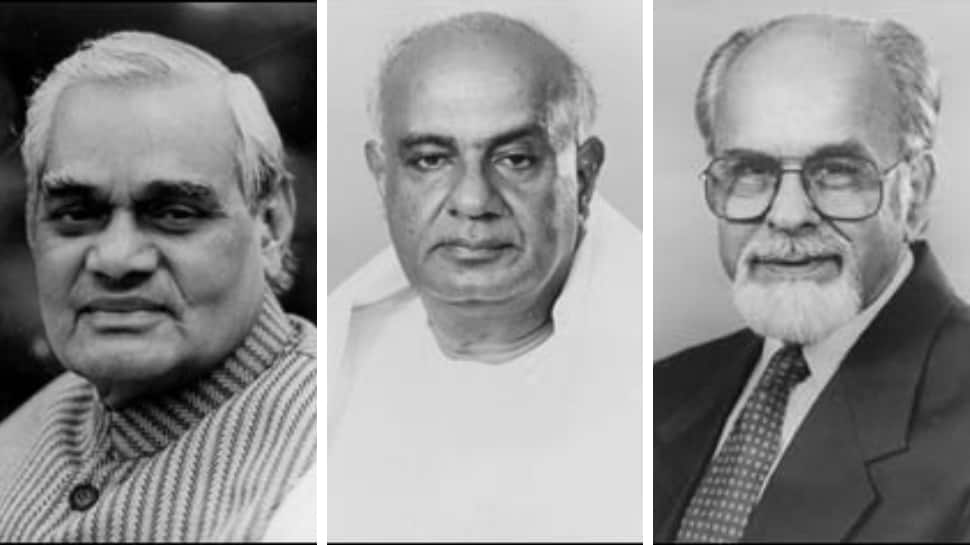 PV Narasimha Rao took over as the Prime Minister in 1991 when the country was on the verge of going bankrupt. Just months before heading out of office, the Chandra Shekhar government had pledged 67 tons of India's gold reserves as collateral security to the Bank of England and Union Bank of Switzerland. It was on PV Narasimha Rao's government to bring India stability back to the country at a time when it was facing its worst economic crisis. The extent of the crisis was that India was not even left with enough foreign exchange reserves so as to last for approximately three weeks. Immediate and aggressive steps had to be taken. Narasimha Rao roped in Manmohan Singh as the Finance Minister to steer what has been since remembered as the historic economic liberalisation in India.

India implemented a wide range of structural reforms with the aim to deregulate the economy and shed the path of treading on relatively protected inward looking industrialisation to a new phase and move to one based on greater competition in the domestic markets. It adopted a more open policy for trade and investment, as well as integration with the global economy ensured a strategic end to the 'license raj'. The radical measures are to date credited to the Narasimha Rao-Manmohan Singh 'jugalbandi'.

While Narasimha Rao was lauded by many of even his critics for transforming the economy, he faced massive condemnation when the Babri Masjid in Ayodhya was demolished triggering one of the worst Hindu-Muslim riots in India. It has been widely said that though Narasimha Rao had an idea of the extent of the action planned led by the Vishwa Hindu Parishad (VHP) but he failed to bring in a contingency plan to prevent the demolition of the mosque. The Liberhan Commission report on the demolition, however later exonerated the then Prime Minister on the grounds that enough central forces needed for such a scenario could not have been deployed beforehand. It also evaluated the criticism over why a President's Rule was not imposed and concluded that such a step could not have been taken on the basis of mere rumours or media reports.

Although Narasimha Rao had spearheaded several historic measures during his term, he failed to showcase himself as an icon of the people. He was undoubtedly a mass leader judging by the number of times he was elected to the Lok Sabha since the first election in 1951-52 but his quiet persona was what might have worked against him.

In the 1996 election, the Congress faced a direct challenge from the Bharatiya Janata Party (BJP) and a United Front coalition comprising of the Left Front and the Janata Dal (JD).

For the 543 elective Lok Sabha seats at stake, the ruling Indian National Congress party of Prime Minister Narasimha Rao was mainly challenged, on the one hand, by the second-placed Bharatiya Janata Party (BJP), and its allies and, on the other hand, by a broad United Front coalition comprising the Left Front and the Janata Dal (JD).

While Narasimha Rao campaigned on the economic reforms that his government had undertaken in the last five years, the Bharatiya Janata Party spoke about Hinduism and against the government's stand on foreign investment appealing for restrictions on them. The saffron party also campaigned on the need for an independent nuclear weapons policy which was not to be impacted by the Western countries. 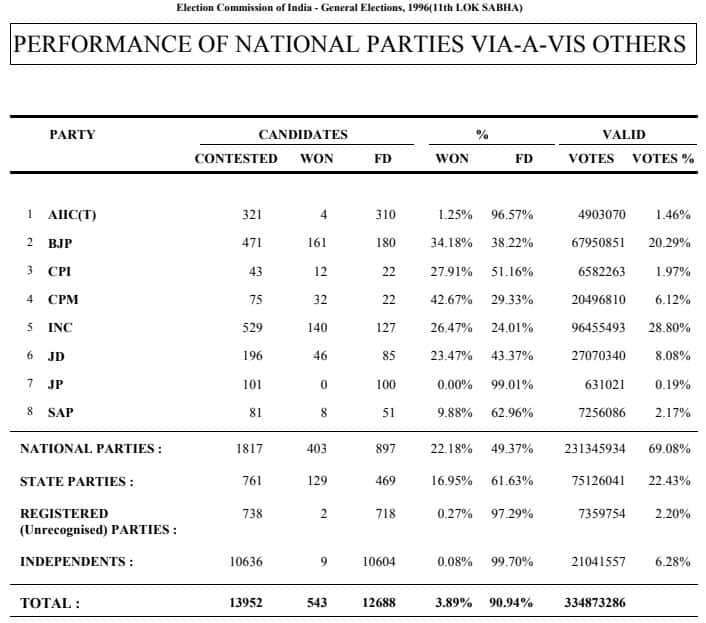 The results threw up a hung assembly with no party even close to the majority of 272 seats. The Bharatiya Janata Party emerged as the largest party with 161 seats. The party made maximum gains in Uttar Pradesh where it bagged 52 seats, followed by 27 seats in Madhya Pradesh. The other states where it made a mark were Bihar where it won 18 seats, 13 more than it won in the 1991 election; 18 in Maharashtra, 16 in Gujarat and 12 in Gujarat.

In an extremely fragmented Parliament, Congress won 140 seats with major losses in the South where it had considerable hold in the 1991 election. As opposed to the 28 seats that Congress won in Tamil Nadu in the previous election, the party could not win even a single seat in the southern state in 1996. It managed to win 15 seats in Maharashtra, 8 in Madhya Pradesh, 7 in Kerala, and 5 in Karnataka as opposed to its previous tally of 38, 27, 13, 23 in the last election. The party also bagged 10 in Gujarat, 16 in Odisha (then Orissa), 12 in Rajasthan and 9 in West Bengal.

The Congress's loss was attributed to several factors like a lack of support among Muslims, untouchables, and members of the backward castes as well as loss of support of Hindu who had backed the Bharatiya Janata Party. Factionalism in the party is also said to have contributed to its loss. Corruption, especially the bribery scandal due to which seven members of the Cabinet had resigned, was also a key reason for a dent in the party's popularity.

The Janata Dal bagged 46 seats of the 196 that it contested on, winning majorly in Bihar where it secured 22 seats and in Karnataka where it won 16. It also won 4 seats in Orissa, 2 in Uttar Pradesh and 1 in Jammu and Kashmir and Kerala each.

Overall, 13,952 candidates were in the fray which included 10,635 independents of which just 9 won. Across eight national parties, 1817 candidates had contested of which 403 had won while 761 candidates of states parties had participated of which 129 won. There were 738 candidates from unregistered parties too who tried their luck in the election but only 2 of those won.

As Bharatiya Janata Party was the largest party, President Shankar Dayal Sharma invited Atal Bihari Vajpayee to form the government. Confident of the support of allies, he took oath as the Prime Minister on 16 May. While the Bharatiya Janata Party sought the support projected itself as a government which believed in moderation, it kept its commitment of the construction of Ram Mandir in Ayodhya, ban on cow-slaughter, among other issues which portrayed its Hindutva image. The party failed to get the backing of the 'secular' outfits and just 13 days later, Vajpayee conceded that he was unable to prove his majority in the House and stepped down as the Prime Minister.

The ball was then in Congress's court but the grand old party refused to stake claim to form the government. The then Karnataka chief minister HD Deve Gowda then assumed charge of the United Front coalition government headed by Janata Dal and supported by the Congress. On 1 June 1996, Deve Gowda Gowda took oath as the Prime Minister. 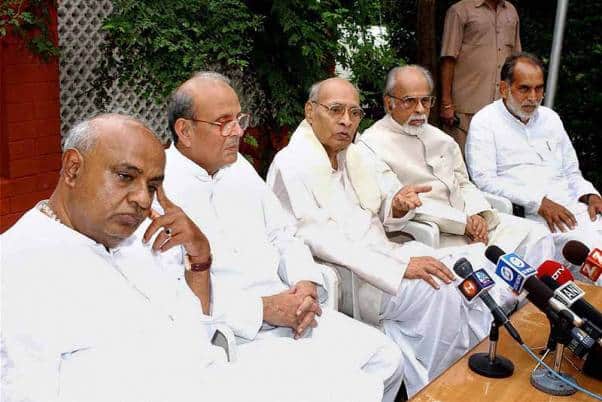 However, running a coalition government of parties from diverse ideologies did not materialise and India was looking at holding elections within just 18 months.

As a measure to defer the polls, the Congress and the United Front agreed to give the government yet another chance, but this time under a new leader. In less than two years, IK Gujral took over as the third Prime Minister of the 11th Lok Sabha on 21 April 1997. But again only for less than a year.

Before his term was about to end, Narasimha Rao had set the path for India's nuclear programme. He personally handed over the charge of the programme to his successor Atal Bihari Vajpayee after the latter took over as the next prime minister. Narasimha Rao along with Abdul Kalam, the then scientific adviser to the defence minister, went to meet the new prime minister to ensure its smooth takeover. However, as the Vajpayee's government lasted for merely 13 days, the nuke test plans could not be carried out.

They would be subsequently carried out in his second term as the Prime Minister in 1998. Recalling Narasimha how Rao's energised the national nuclear security and ballistic missiles program, which resulted in the 1998 Pokhran nuclear tests, Vajpayee had himself narrated Rao's words where he said: "Saamagri tayyar hai. (Rao had told me that the bomb was ready.) I only exploded it."