Though the tide was in favour of the NDA, the Congress was pulling out all its trump cards to defeat the BJP and come back to power. For the first time, Congress chief Sonia Gandhi's son Rahul entered electoral politics and was named as the party candidate from Amethi Lok Sabha seat.

Having served at the Centre from 1999 to 2004, the Bharatiya Janata Party-led National Democratic Alliance became the first non-Congress government to have completed its full term in Lok Sabha. As prime minister, Atal Bihari Vajpayee took a series of economic reforms which led to an increase in the country's Gross Domestic Product. A rise in foreign investment, modernisation of infrastructure in the country, more jobs and the growth of the IT industry had changed India's image for good. It was with this image in mind that the BJP felt that it had a strong footing and would win the election if they were called in early.

It is believed that Vajpayee was not convinced to call snap polls, but he gave in to the advice of his consultants who felt that the BJP would come back strongly. Wins in Assembly elections held in key states in 2003 had also given the BJP the confidence of a comeback at the Centre. The Vajpayee government, hence in February, recommended early election, six months ahead of the scheduled polls in October.

Exuding confidence, the NDA government took to people an 'India Shining' campaign which it believed reflected the feeling of optimism and progress that the people had due to the decisions taken over the last five years. The campaign, which was intended to project a positive image of India among the international community, even had a mention in the NDA government's Budget speech. However, the manner in which it was rolled out, many called it BJP's marketing campaign where Vajpayee was being projected as a brand. The criticism though was rubbished by the BJP which claimed that the country regarded Vajpayee as a symbol of progress.

While the government used India Shining to convince voters to convince them of their work the last five years, the BJP designed another campaign to get up close and personal with the electorate. Vajpayee remained the face of India Shining campaign, but the then deputy prime minister LK Advani started his rath yatra. Called the Bharat Uday Yatra, Advani undertook an 8,500 km-long bus journey which would be completed in 33 days. 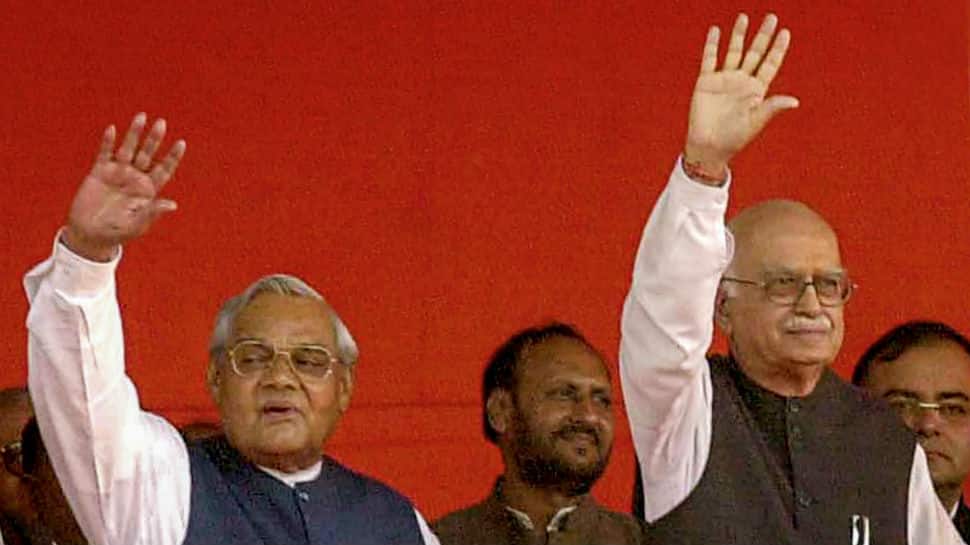 Though the tide was in favour of the NDA, the Congress was trying its best to better the dismal performance that it had had in the previous elections. The party was pulling out all its trump cards to defeat the BJP and come back to power. For the first time, Congress chief Sonia Gandhi's son Rahul entered electoral politics and was named as the party candidate from Amethi Lok Sabha seat. Sonia's daughter Priyanka Gandhi Vadra, who was a big crowd puller owing to the stark similarities that she had in her look and demeanour with her grandmother Indira Gandhi, was also closely involved in the party's election campaign. While the BJP claimed that it had created a stronger economy with millions of new jobs, Congress rejected the NDA government's assertions and argued that there was no improvement in the lives of the poor people.

While BJP's campaign focussed on the political stability, peace with Pakistan, better situation in Kashmir, increasing international status, it failed to touch the nerves of the people who were battling with the poverty issues. Though there were good crop harvests which would have helped the farmers, the government by announcing an early election could not announce the schemes it had planned for the agriculture sector.

The Congress caught this missing link in BJP's star-studded campaign and showcased how it cared for the poor and how the there was no improvement in the lives of the landless poor people or those living in the slums under the NDA government.

The BJP's plans of early poll suffered the first dent when the Election Commission announced the voting dates in April, at least 75 days after the government's recommendation for early election. The extra time that the Election Commission took to finalise the poll schedule gave the Congress enough leeway to stitch pre-poll alliances to have a strong footing in the electoral race.

The election beginning on 20 April was to be held in five phases over three weeks till May 10 to facilitate the movement of electoral officials and security workers. Though the Election Commission had used the Electronic Voting Machines previously in some Assembly elections, it was the first time that the poll body was using them instead of the ballot papers for the Lok Sabha election. Nearly one million electronic voting machines were deployed across the 543 constituencies in the country to record the votes.

The exit polls had been predicting BJP's win in the election when the snap polls were announced but as the voting dates got closer, the tide seemed to have been turning against the saffron party. The worst fears of the BJP-led NDA came true when the counting of the EVMs was held on May 13.

(Read the tally of parties in 1999 Lok Sabha election)

The BJP managed to secure just 138 seats as against the 182 seats that it had won in the last election. At least five members of the Vajpayee Cabinet, including the foreign minister and the education minister, could not win their seats. The BJP suffered big losses in Uttar Pradesh and Bihar where it bagged just 10 and 5 seats as opposed to its 1999 tally of 29 and 23 respectively. It also lost 6 crucial seats in the then chief minister Narendra Modi's Gujarat where Godhra riots had been held in 2002. It made some gains in Karnataka and Rajasthan where it won 18 and 21 seats respectively. Its allies too failed to impress and the NDA secured just 185 seats in the 543-member House.

Though no single party gained a clear majority, it was a comeback for the Congress, one that they themselves had least expected. The seat share of the party though did not see a surge as it had achieved in the past, its coalition - United Progressive Alliance - had enough numbers to come to power. Congress emerged as the single-largest party with 145 seats in its kitty. It doubled its number of seats from 6 to 12 in Gujarat, won 9 seats in Haryana, 10 seats in Tamil Nadu, 6 out of 7 seats in Delhi and 6 seats in Jharkhand too. The support of the alliance partners and other regional parties made Congress cross the magic figure of 272. The UPA bagged 214 seats while 138 more seats were won by other parties and independents.

The Nationalist Congress Party, which was formed after opposing Sonia's claim on the PM post, bagged 9 seats of the 32 it contested on. The Bahujan Samaj Party (BSP) too kept up on its upward curve and won 19 seats, 5 more than the last election. 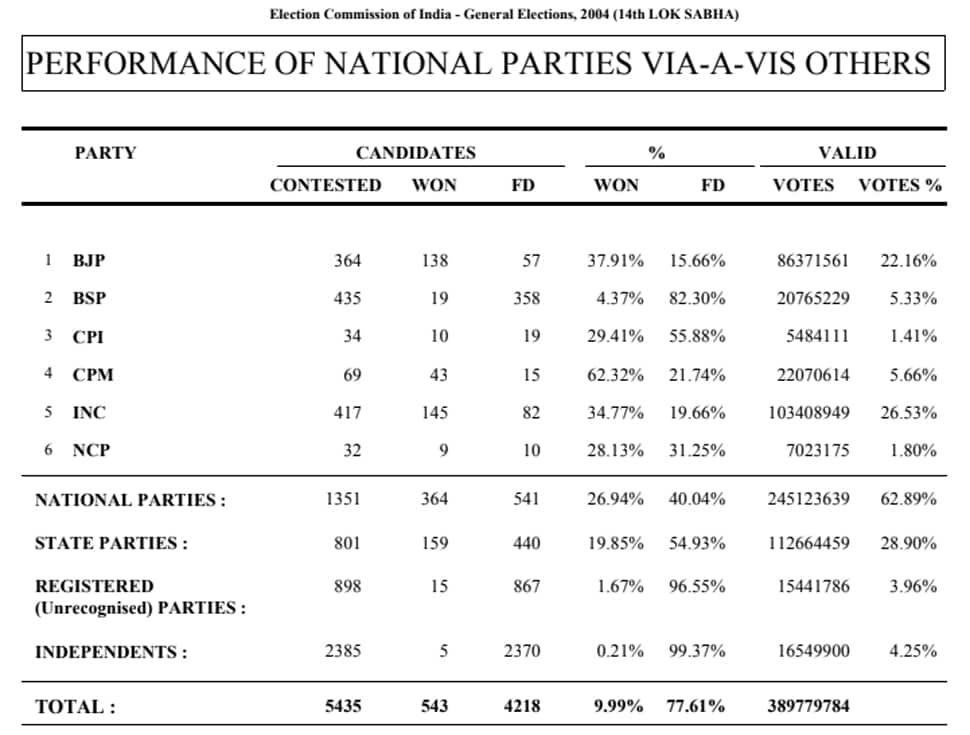 Even before the full election results were announced, BJP conceded defeat and Vajpayee tendered his resignation. With 185 MPs, the NDA said that they would take the opposition benches in Parliament.

The buzz was now about whether Sonia would become the fourth member of the Nehru-Gandhi dynasty to become the prime minister of the country. However, the issue of her Italian origins had come back to haunt her. Though she had met the then president APJ Abdul Kalam, days after the results were announced, she did not claim stake to form the government. On May 18, she gave up her claim to the PM post. "The post of prime minister has not been my aim. I was always certain that, if ever I found myself in the position I am in today, I would follow my inner voice. I humbly decline the post," she had said announcing her decision - one which left the newly-elected Congress MPs shouting and pleading with Soni to reconsider her stance.

The other two top contenders then for the post were former finance ministers - Pranab Mukherjee and Manmohan Singh. On May 19, the party announced that Manmohan Singh would lead the country as the 14th Prime Minister. He stated that the country had voted for Sonia Gandhi but as she was declining the post, he would take up the mantle to work under "madam's guidance and with the support of the nation".