There were speculations that the then Congress vice president Rahul Gandhi will be the PM candidate of the UPA in 2009 election after Manmohan Singh underwent a heart surgery. However quelling all rumours, Sonia Gandhi announced that Singh will yet again be the PM face of the UPA.

When the then Congress president Sonia Gandhi turned down the post of the Prime Minister in 2004, former finance minister Manmohan Singh 'humbly' took the mantle to lead the United Progressive Alliance government. Though Singh, who is credited for the liberalisation of the Indian economy, had never won a Lok Sabha election, he was widely respected for his clean image in politics.

Singh led the UPA government from 2004 to the completion of the 14th Lok Sabha in 2009. During his tenure as the Prime Minister, the Indian economy continued to remain on the upward curve and even touched its highest GDP growth rate in 2007. Several projects taken up by his predecessor Atal Bihari Vajpayee's government in the previous term like the Golden Quadrilateral and the highway modernisation program were taken forward by the UPA government. He also continued the peace process with Pakistan that Vajpayee had initiated.

One of the biggest takeaways from the term was the signing of the nuclear cooperation agreement with the United States under which India would gain access to US civilian nuclear technology and fuel. On the other hand, India agreed to place its civil nuclear facilities under International Atomic Energy Agency (IAEA) safeguards. "It is an Agreement between two States possessing advanced nuclear technologies, both parties having the same benefits and advantages. The significance of the Agreement lies in the fact that when brought into effect, it will open the way for full civil nuclear energy cooperation between India and the United States," Singh had said while briefing Parliament in 2007.

The coalitions that were formed before the 2004 election continued for the 2009 election too. While the Congress steered the UPA and the Bharatiya Janata Party led the National Democratic Alliance.

Projecting itself as a secular party, the Congress said in its agenda that the party has "been the bulwark against the four 'isms' that threaten to tear our country apart -- communalism of all kinds, linguistic chauvinism, regional parochialism and casteism." It argued that it has an inclusive vision as against the BJP's "narrow and communal nationalism" which it claimed denied equality and equal rights to large sections of our people. It had also called the Third Front to be "a grouping of opportunistic parties which neither have consistency nor clarity. They have neither competence nor commitment. This Front, grounded in the politics of convenience, is nothing but a platform for personal ambitions," the Congress had said its manifesto.

It also brought to people the achievements of the UPA government in the last five years. Congress said that it had fulfilled the promises that it had made in 2004 like the creation of more jobs, economic growth, primary education; brought legislations like Right to Information Act, 2005, enacted National Rural Employment Guarantee Act; launched National Rural Health Mission.

There were speculations that the then Congress vice president Rahul Gandhi will be the PM candidate of the UPA after Singh underwent a heart surgery. However quelling all rumours, Sonia announced that Singh will yet again be the face of the UPA. 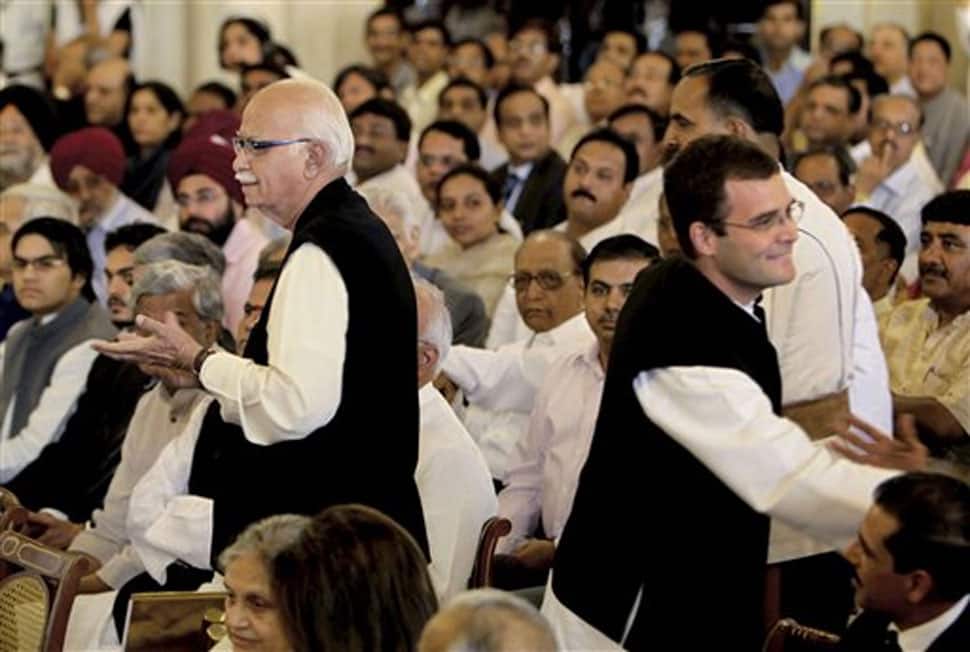 On the other hand, former prime minister Vajpayee was no longer the NDA's prime ministerial candidate for the 2009 election. After the NDA's defeat in the 2004 election, Vajpayee in 2005 had announced that he would not contest the next parliamentary election. The NDA had announced BJP veteran LK Advani as its PM face in early 2009 in view of his "lifelong service to the nation, vast political and parliamentary experience, and unimpeachable record of integrity".

The BJP hit out at Singh's government alleging that the government mismanaged the economy. Advani promised that persons earning less than Rs 300,000 a year and those over the age of 60 will be exempt from paying income tax if the BJP comes to power. The election was taking place just months after the 2008 Mumbai terror attacks in which at least 170 people were killed and more than 300 injured. Hence, the BJP targeted the incumbent government for not taking enough counter-terrorism measures. The BJP vowed to have a tougher law to enhance the security of the country.

In a direct faceoff expected between the UPA and the NDA for the 15th Lok Sabha, pollsters had predicted a hung Parliament with neither of the coalitions in a position to win a majority.

When the results were announced in May, the Congress surpassed expectations and emerged as the single largest party with 206 seats as against the 145 seats it had won in 2004. It bagged the most number of 33 seats in Andhra Pradesh, followed by 21 in Uttar Pradesh, 20 in Rajasthan, 17 in Maharashtra, 13 in Kerala, 12 in Madhya Pradesh and 11 in Gujarat. The UPA comfortably won 261 seats, paving way for the alliance to form the next government with the support of other parties.

While the Congress improved its tally as compared to the 2004 election, the BJP's numbers dipped. From 138 in the past election, the saffron party under Advani's leadership bagged 116 seats. It won the most number of 19 seats in Karnataka, 12 in Bihar, 16 in Madhya Pradesh, 15 in Gujarat and 10 in Uttar Pradesh. Along with the BJP, the other partners took the NDA's tally to 159.

The Third Front, which was led by Communist Party of India (Marxist), bagged 78 seats. The other parties in the Third Front included the Communist Party of India (CPI), the Revolutionary Socialist Party, the All India Anna Dravida Munnetra Kazagham, the Forward Bloc, the Janata Dal (Secular), the Telangana Rashtra Samithi, the Telugu Desam Party and the Bahujan Samaj Party. 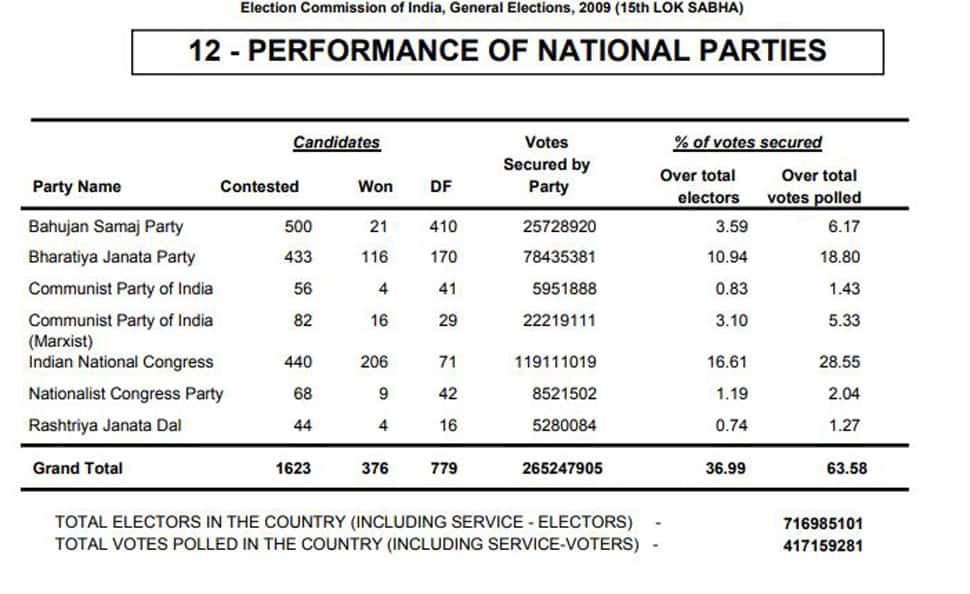 The Bahujan Samaj Party (BSP) won 21 seats, 2 more than the last election. The AIADMK won 9 seats, all from Tamil Nadu; the JDS bagged 3 seats; the Forward Bloc and TRS 2 seats each.

With the support of Samajwadi Party, three members of the Janata Dal (United), several independent members as well as the BSP which was a part of the Third Front, Singh staked claim to form the government in 2009. He took oath as the Prime Minister of India, becoming the first since Jawaharlal Nehru to be re-elected after completing a full five-year term.