A number of Bollywood celebrities tried their luck in Lok Sabha election 2019. While some shone, others failed to impress voters. 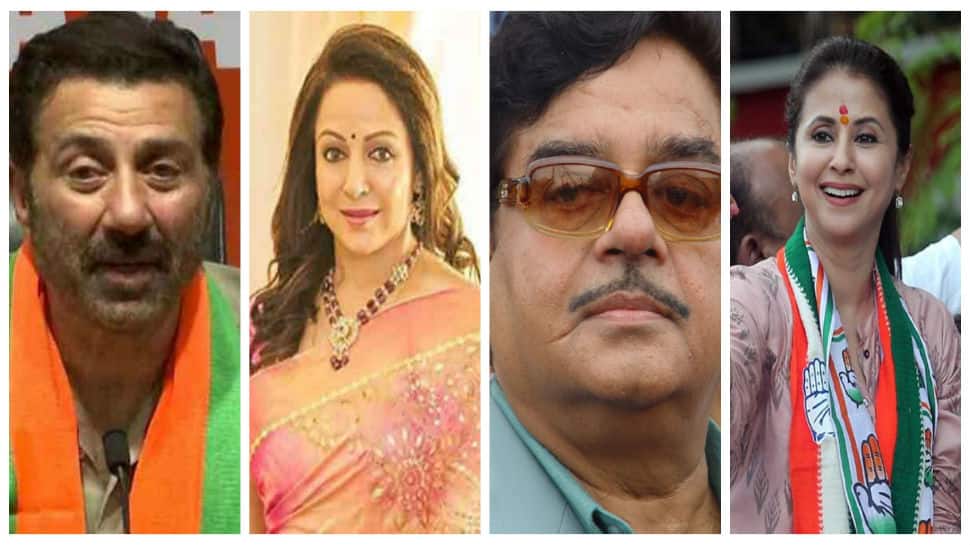 New Delhi: An election is no movie but it has its fair share of action, drama, tragedy and even a healthy dose of comedy. Little wonder then that Bollywood celebrities have often stepped out of their glamorous world and tried their hand at toiling in electoral contests. Lok Sabha election 2019 was no different and a number of Bollywood celebrities fought to script their real-life blockbusters. While some managed hits, the others flopped. Here's taking a look at how actors and actresses fared in Lok Sabha election 2019.

Sunny Deol: The action star made his political debut in an emphatic fashion this year by joining the Bharatiya Janata Party (BJP). He was put up for battle from Gurdaspur constituency and he staged a valiant fight against Congress' Sunil Jakhar to stage a respectable win.

Manoj Tiwari: The singer-turned-actor-turned politician has been leading the charge for BJP in Delhi and showed his prowess here once again in Lok Sabha election 2019. He defeated three-time CM Sheila Dikshit by nearly three lakh votes. Known also for acting in Bhojpuri films, apart from lending his voice to a song in Bollywood film Gangs of Wasseypur, Tiwari may now also take the lead for BJP in the Delhi assembly election scheduled for 2020.

Ravi Kishan: An established actor in both Bollywood and Bhojpuri film industry, Ravi Kishen was named as the BJP candidate from Gorakhpur constituency. Here, he faced off against Samajwadi Party's Rambhual Nishad and managed to defend UP CM Yogi Adityanath 's home turf. Kishan won the election by a margin of over three lakh votes.

Hema Malini: Also known as 'Dream Girl', Hema Malini enthralled fans for years with several superhit films to her credit. The veteran actor now seems to have made it a habit to deliver electoral hits and cruised to her second successive win from the Mathura Lok Sabha seat. This year, Hema defeated Rashtriya Lok Dal candidate Kunwar Narendra Singh by over three lakh votes.

Jaya Prada: Another Bollywood celebrity as part of BJP's force in Lok Sabha election 2019, Jaya Prada had joined the party just before polling. She was put up against Samajwadi Party's Azam Khan - her former party colleague - from Rampur seat. A bitter and extremely spiteful campaign eventually ended with Jaya Prada losing out to Azam Khan by over one lakh votes.

Kirron Kher: Quite a veteran in BJP, having joined the party in 2009, Kirron Kher managed to win from Chandigarh Lok Sabha constituency in 2014 by a considerable margin. Renaming her from here seemed an obvious decision and Kher did not disappoint. Kher defeated Congress' Pawan Kumar Bansal.

Urmila Matondkar: The superstar from 90s and early 2000s decided to try her luck in politics this year and joined Congress in March, just two weeks before polling in the first phase of Lok Sabha election. "Today, there are too many questions on the minds of people and it is for this that I have joined politics," she had said. For her, big questions remained as Urmila raised aspersions on EVMs after a massive defeat to Gopal Shetty, BJP heavyweight in Mumbai North constituency.

Prakash Raj: Known for his stellar roles as a villian in several high-octane Bollywood films, Prakash Raj sought to be a political hero as an Independent this Lok Sabha election 2019. Contesting from Bengaluru Central seat, he received just 28,906 votes in what was a BJP vs Congress fight. "A solid slap on my face," he tweeted on results day.

Poonam Sinha: Known more as being the wife of Shatrughan Sinha and mother of Sonakshi Sinha, Poonam Sinha has also acted in a few Bollywood films in the 70s and had a supporting role in the 2008 film Jodhaa Akbar. In a bid to try her luck in elections, she entered politics earlier this year by joining Samajwadi Party. She was named the party candidate from Lucknow seat but it was always going to be a herculean task to bring down Home Minister Rajnath Singh from here. The BJP veteran helped himself to a win by a margin of well over three lakh votes.

Shatrughan Sinha: Shatrughan's political career has been almost as colourful as his career in Bollywood.  The former BJP MP from Patna Sahib Lok Sabha constituency crossed over to Congress this year and faced Ravi Shankar Prasad. Shatrughan would go down by nearly three lakh votes.

Moon Moon Sen vs Babul Supriyo: Her comments about not knowing about the violence in her constituency because she did not get her bed-tea on time made Moon Moon Sen viral for some time on social media. Moon Moon, who has acted in several Bollywood films in addition to an even longer list of Bengali movies, joined Trinamool Congress in 2014 and defeated nine-time MP from Bankura Basudeb Acharia in the Lok Sabha election that year.

The story was completely different this year as she went up against noted Bollywood singer Babul Supriyo. Supriyo had joined BJP in 2014 as well and he had made headlines for opening the party's account in the state by winning from Asansol. This year, he grabbed the limelight once again and eclipsed Moon Moon by over two lakh votes.

Raj Babbar: A noted actor in his prime years, Babbar has been an important political leader for Congress in UP. The state unit president of the party, he failed to inspire much confidence from voters this year and suffered a humiliating loss to BJP's Rajkumar Chahar in Fatehpur Sikri seat - by nearly five lakh votes.

Hans Raj Hans: While he may have enthralled fans with his voice so far, singer Hans Raj Hans now has fascinated voters after joining BJP just before the election. Put up as the party candidate from North West Delhi seat, he secured nearly 8.50 lakh votes to decimate his rivals.