In Bengal, poll graffiti and limericks find favour in the age of social media

In an age when social media holds sway, good old poll graffiti and limericks still find favour with parties in politically conscious Bengal to grab the attention of its voters. 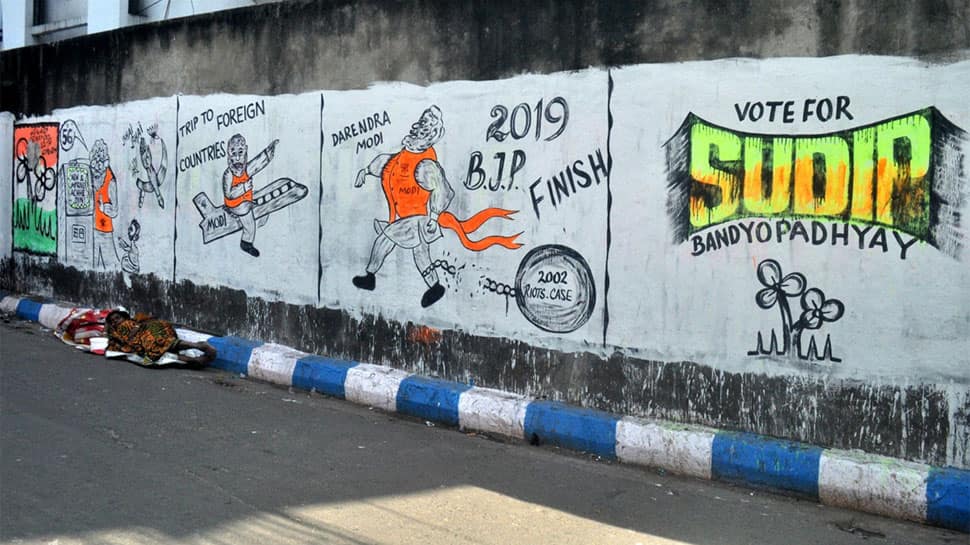 Kolkata: In an age when social media holds sway, good old poll graffiti and limericks still find favour with parties in politically conscious Bengal to grab the attention of its voters.

The walls of buildings across the state have been claimed by political parties before the polls. Adorning them are graffiti depicting 'chowkidar' sitting idle while industrialists loot banks (put up by the TMC) to those by the BJP, lampooning the opposition efforts to cobble up an alliance.

Limericks in catchy tunes mocking TMC's policies to BJP's poll promises are also being preferred by the political parties.

"Graffiti and limericks are an integral part of poll campaign in Bengal. Canvassing is incomplete without them. Social media undoubtedly has a wider reach, but the visual impact of graffiti can never be denied," veteran politician and senior TMC leader Subrata Mukherjee told PTI.

Mukherjee, who is also a minister in the Mamata Banerjee cabinet, and is contesting the elections from the Bankura Lok Sabha seat said, during elections he himself takes part in wall-writing.

"During the 60s and 70s when I was in the Congress I would with the party's workers regularly whitewash walls and write on the walls, and paint the party symbol. I find it relaxing during the hectic campaign schedule," he added.

"The wall-writings and limericks are still important as in the past several decades. They are very popular even now. In villages wall writing and graffiti on the mud walls of the huts are one of the most popular mediums," Mitra told PTI.

He recounts how he along with Congress workers used to guard walls to keep away opposition parties from "capturing" them.

The CPI(M) has always been way ahead of its rivals in wall-writing and graffiti. It has a dedicated team of workers and student activists who involve themselves in it and pen catchy slogans.

"Poll graffiti is still the cheapest form of campaign. No matter what the evolution in campaigning methods may be, the graffiti with the candidates name, witty messages and slogans still impact the voters in a much better way," CPI(M) central committee member Sujan Chakraborty said.

The graffiti find curious onlookers, like the one by TMC on BJP's troubles to find suitable candidates for the 42 Lok Sabha seats in the state. It shows Prime Minister Narendra Modi holding a cow in leash with a message below "Come let's make you a BJP candidate for the Lok Sabha elections".

The surgical strike in Pakistan is not forgotten. In a graffiti BJP president Amit Shah is shown holding a gun with 'surgical strikes' written on it and aimed at the leaders of the 'Mahagathbandhan' to get their elected representatives into his party.

Mamata Banerjee's fight against BJP and her party MPs switching over to the saffron party are humourously shown as match fixing between both the parties by the CPI-M. Banerjee is shown chasing Narendra Modi and Amit Shah while her party MPs are seen leaving a car and getting into BJP's chariot.

Sending out a message of the Centre's indifference towards the state and TMC's ambition to play an important role in the next government is a limerick found written on the walls of Dum Dum Lok Sabha constituency.

The tradition of poll limericks and graffiti go back to Bengals elections in 1952 when the first election of independent India was held. Due to high cost of paper, both the Congress and the Communists had then started using the walls to put forth their agendas and ideas.

The graffiti and limericks - some witty, some satirical and some thought provoking - have been an inseparable part of any elections in the state since then.

To add humour to those messages, graffiti artists started drawing cartoons and writing catchy slogans and limericks which became instant hits during the polls.

During the tumultuous '60s and '70s naxals too used graffiti as a means to spread their messages.

The importance of wall writings can be gauged from the fact that reports of clashes over wall writing are quite common in rural and semi urban areas of the state during poll campaigns.

"As soon as election dates are declared there is a rush among the various parties to capture the walls. The walls are quickly white washed and names of the party who have 'captured' it written at the bottom of the space is a common sight in the state," said a TMC leader.

Sovan, a political graffiti artist and a part time painting teacher, recalled the legendary slogans that once covered the walls.

"Its not just politics but fun too when you add humour to the poll campaign, which most often get vitiated by mud slinging and personal attacks. The charm and lure of wall graffiti has remained the same," he added.