In BJP's battle for Chandigarh, fight for ticket gathers steam over 'chai' and coffee

While the party's sitting MP, actor-turned-politician Kirron Kher, is on her "Coffee with Kirron" drive, city BJP chief Sanjay Tandon, who hopes to be fielded this time, has been holding "Chai pe charcha" to connect with people. 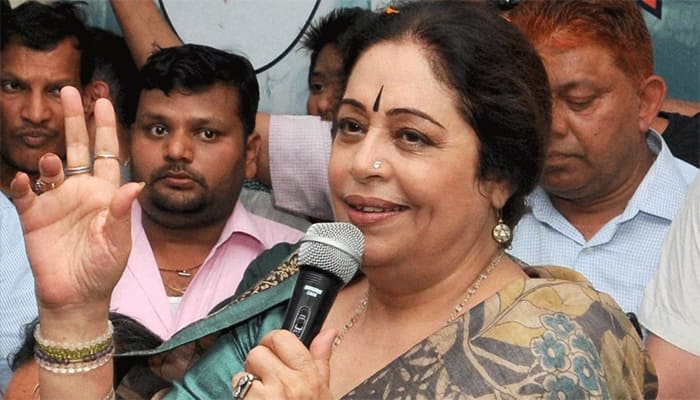 As the battle for the high-profile Chandigarh constituency gathers steam amid intense lobbying for tickets within parties, its coffee versus tea inside the BJP with hopefuls using the humble beverages to mobilise support in a bid to put forward their case.

While the party's sitting MP, actor-turned-politician Kirron Kher, is on her "Coffee with Kirron" drive, city BJP chief Sanjay Tandon, who hopes to be fielded this time, has been holding "Chai pe charcha" to connect with people.

Over coffee, Kher has been talking to voters from different walks of life -- from techies to senior citizens, banking on the work she has done in the last five years.

She is credited with getting the Centre's nod for changes in the Union territory's employees' housing scheme, which was pending since 2008, the approval for need-based changes in houses of the Chandigarh Housing Board and in the industrial areas.

Besides, the conversion of leasehold to freehold residential properties has also been allowed during her tenure.

She is also credited with the increase in the upper age limit for entry into government service in the UT, from 18-25 to 18-37 years and construction of five new sport complexes, among others.

Inspired by Prime Minister Narendra Modi's "chai" sessions, Tandon, who has been in the saddle as the BJP's city unit chief for over eight years, is gathering support over tea, discussing issues that the city faces.

The Chandigarh unit of the BJP is faction ridden and Kher and Tandon are known detractors. The two often hold parallel events and rarely attend each other's programmes.

The core committee of the party's city unit, which met here recently, has shortlisted three names for the seat -- the other one being that of former MP Satya Pal Jain.

On who could be the party's choice for Chandigarh this time, Tandon said it was up to the central leadership to decide.

Manish Tewari, a former MP from Ludhiana, has been holding public meetings on a regular basis over the past few months here.

Bansal, on the other hand, exudes confidence that the party would repose faith in him by giving another chance from Chandigarh.

"After having worked all these years, I know the people here. I know the geography and history of Chandigarh. I enjoy very good rapport with people in the party and outside," he added.

On Bansal and Tewari also vying for the seat, Navjot Kaur, the former MLA from the Amritsar-East seat said, "It is for the party to decide (on giving ticket). If Pawan Bansal gets it, I will be the first person to help him out."

Chandigarh usually goes with the trend at the national level, with voters electing candidate of the party that comes to power at the Centre, a feat recorded 11 times.

This time, the AAP has decided to field former Union minister Harmohan Dhawan, who recently switched over from the BJP.