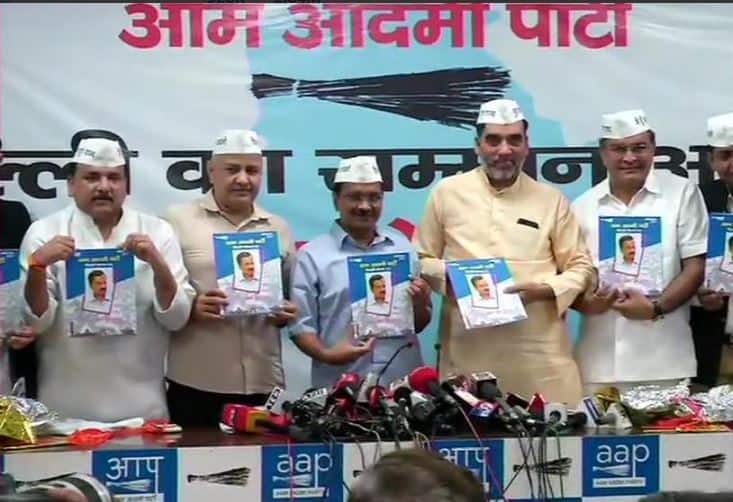 Kejriwal released the manifesto in presence of senior AAP leaders Manish Sisodia, Gopal Rai and Sanjay Singh. The 35-page manifesto of AAP titled `Le Kar Rahenge Purna Rajya` (We will secure full statehood) said that full statehood was needed for the devlopment of Delhi as only this would give the state government control over land, law and order, police and other government officials.

"With full statehood, several dreams of the people of Delhi will be realized. Women safety will considerably improve. Law and order in Delhi will improve. Youth will get jobs. Every child who has scored more than 60 per cent marks in 12th standard will get a college admission. Sealing will be stopped in Delhi. Every Delhi resident will have a house of his/her own. Unauthorized colonies will be regularized. Delhi will be a clean and beautiful city. Delhi will accelerate towards the path of development," the Delhi Chief Minister said in a message.

Kejriwal slammed both the BJP and Congress for not making any commitment on the question of granting complete statehood to Delhi. He said that both the Congress and the BJP had their government at the centre and in Delhi but these parties failed to take any effective step aimed at giving full statehood for Delhi. "Even today, the stance of BJP and Congress is not favourable towards granting full statehood," read the AAP manifesto.

In a direct attack on PM Narendra Modi, the AAP supremo said that before becoming the Prime Minister, Modi had also demanded full statehood for Delhi but he backtracked on his promise after coming to power.

In the manifesto, the AAP claimed that the Delhi government had faced several hurdles from the Centre but it still managed to achieve remarkable progress in the fields of education, health, electricity and water. "We fulfilled all the promises that we made. With full statehood, we assure you that we will fulfil all the above promises," Kejriwal said.

Appealing to the voters of Delhi, Kejriwal said that this time the people must vote to make Delhi a full state. "History and almighty give an opportunity only once. Delhi has that opportunity at this moment. This time, vote for AAP so that Delhi becomes a full state," he said.