Top political leaders continued with their Lok Sabha election campaigns on Friday, crisscrossing the country to woo the voters. 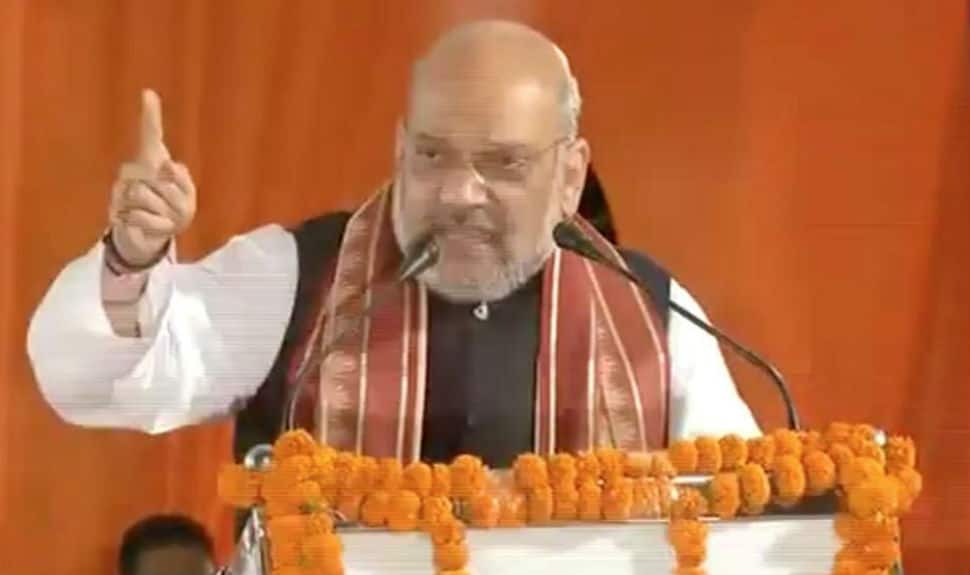 Top political leaders continued with their Lok Sabha election campaigns on Friday, crisscrossing the country to woo the voters.

Thank you for joining us. Do come back again on Saturday (May 4) for live updates on election. Meanwhile, here are the updates from the ground on Friday (May 3):

* Rahul Gandhi’s travel programme in Uttar Pradesh and Haryana for May 4:

* They wish to win elections anyhow. We never took credit whether it was air strikes or Bangladesh war, credit must go to forces. It's not Congress' insult, it's an insult of jawans: Ahmed Patel on PM Modi's remarks on Congress' claims 'six surgical strikes were carried out during UPA government'

* Congress now claims they carried out 6 surgical strikes. What strikes were these about which the terrorists did not get to know, Pakistan didn't know, even Indians didn't know. First they mocked, then protested and now they say 'me too, me too': PM Modi in Sikar, Rajasthan

* "I'd asked (the children) to stop chanting wrong slogans. Will respond to the notice," says Priyanka Gandhi Vadra, day after the National Commission for Protection of Child Rights (NCPCR) issued a notice regarding a video in which children "are being actively involved in election campaigning" and can be seen "shouting slogans, using derogatory remarks and using abusive language" in her presence

* "Two days back, a major enemy of India, terrorist leader Masood Azhar was designated a global terrorist. This terrorist leader, sitting in Pakistan, was giving India injuries after injuries. Several brave mothers of Rajasthan lost their brave sons while they attacked such terrorists but now this terrorist is finding it difficult to enjoy in Pak. Surgical strike, air strike & now this major international strike on intentions of Pak, terrorists and terrorist leaders. When there was Congress govt at the centre, terrorist attacks had become a daily affair. No city was safe in their tenure. Everyone knows how terrorists attacked Mumbai in 2008. What happened in Mumbai at that time, was neither the first nor the last," says PM Modi.

* I took latest update from officers. I held a review meeting y'day. More than Rs 1000 cr was release to concerned govts y'day in advance. NDRF, Indian Coast Guard, Army, Navy, Air Force are working with admn. I assure the affected people that nation and centre are with them: PM Modi

* "Nationalism is not just about love for the country, protection from Pakistan. It also mean keeping our farmers and their farms safe, loving our fellow countrymen and listening to them," Priyanka Gandhi Vadra at Raebareli.

* Election Commission allows Congress-led Madhya Pradesh government to waive off farmers' loans. The process will start in constituencies where polling is over. Nearly 4.5 lakh farmers are expected to benefit from the waiver.

* Tamil Nadu: Popular Front of India releases statement on NIA raids on their offices and members residence across the state. “PFI calls the searches and raids against their party leaders are motivated and vouches to face it legally and by Democratic protests. NIA has constantly foster false charges against PFI to discredit us and NIA attempt to bring bad name to us in the Hadiya case is a testimony. NIA court has dismissed all the "Love Jihad" charges against PFI. When there are numerous murder cases filed , why NIA should take up only Ramalingam case. NIA is acting under the BJP's pressure and its spreading canards against PFI. Has ever NIA acted this shiftly in Malegaon blast or Samjodha express blast cases. PFI will face all the charges legally and will fight it out though Democratic protests.”

"Have cancelled my rallies for the next 48 hours because of what could be an impending disaster #CyclonicStormFANI We are monitoring the situation 24x7 and doing all it takes. I appeal to all people to cooperate. Be alert, take care and stay safe for the next two days," she tweeted.

Have cancelled my rallies for the next 48 hours because of what could be an impending disaster #CyclonicStormFANI We are monitoring the situation 24x7 and doing all it takes. I appeal to all people to cooperate. Be alert, take care and stay safe for the next two days

* "Looking forward to visiting Rajasthan today. Will be campaigning in Hindaun, Sikar and Bikaner. In order to gauge the mood of the state, here’s a short clip from my last rally in Jaipur. It is clear people of the state want BJP," tweeted PM Modi.

Looking forward to visiting Rajasthan today. Will be campaigning in Hindaun, Sikar and Bikaner.

In order to gauge the mood of the state, here’s a short clip from my last rally in Jaipur.

It is clear people of the state want BJP! pic.twitter.com/HoYipm5Y3S

* Election Commission to decide on Sadhvi Pragya's petition today. The poll panel had banned the BJP candidate from Bhopal from electioneering for 72 hours for her remarks on former ATS chief Hemant Karkare and Babri mosque demolition. The ban came into force at 6.00 AM Thursday. In the review petition, Sadhvi Pragya has requested that the ban be reduced to 12 hours.

* Jharkhand: Naxals blew up the BJP office in Kharsawan of Saraikela with cane bombs around 12:30 am on Friday. Kharsawan falls under Khunti Lok Sabha constituency, where party president Amit Shah is scheduled to hold a rally today. Former Jharkhand chief minister and BJP leader Arjun Munda, who is contesting from Khunti in the Lok Sabha poll, functioned out of the office. Read more

*A video of some Congress leaders, including former ministers N Cheluvarayaswamy and P M Narendraswamy, former legislator H C Balakrishna, Ravi Ganiga and Malavalli Shivanna at a dinner reportedly hosted by Sumalatha at a private hotel on Tuesday, has surfaced, reported news agency PTI.  Sumalatha, the widow of actor-turned-politician M H Ambareesh, is contesting the Lok Sabha poll from Karnataka's Mandya as an independent candidate. Congress has downplayed the meeting.