Zee News' Vivek Patiaya reports that Sadhvi Pragya trained her guns at Congress, accusing the party - once again - of having tortured her.

Bhopal: On a day which saw the Election Commission giving a clean chit to her on allegations that she had violated the 72-hour campaign ban imposed on her, Sadhvi Pragya opted to take out a bike rally in a bid to reach out to voters in Bhopal Lok Sabha constituency.

Sitting on the backseat of one of three bikes, Sadhvi Pragya was flanked by many of her well-wishers as she made rounds of Bhopal's south-west assembly segment. Waving to locals throughout, she sought blessings from the elderly and was also seen interacting with middle-aged people as well as children. Through the entire course of the rally, she kept asking people to choose the Bharatiya Janata Party and ignore the divisive politics of Congress, a party that has named veteran leader and former MP CM Digvijaya Singh as its candidate from here. 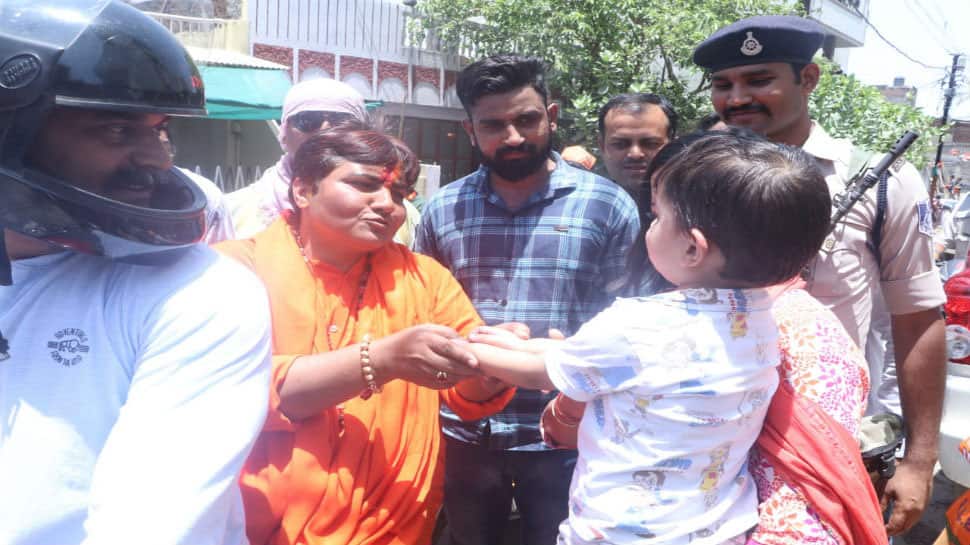 Speaking to Zee News,  Sadhvi Pragya said that despite the fragile condition of her body, she felt it was necessary to be part of the bike rally as it was a good way to interact with people at large. "The condition of my body has been ruined by Congress. They have tortured and broken me. Even then I won't bow down and will continue to fight for nationalism and women's respect," she said. Sadhvi Pragya had, even in the past, accused Congress of using police force against her when she was jailed in the aftermath of 2009 Malegaon blasts.

Sadhvi Pragya had made her debut in politics by joining BJP on April 17 and was subsequently named as the party candidate from Bhopal, a Lok Sabha constituency that BJP has won each time since the 1989 election. Her entry to politics and fighting the ongoing election was slammed by BJP's rivals as well as by the father of a victim in Malegaon blasts. She was also banned from campaigning for 72 hours by the EC last Wednesday after her controversial remarks about having participated and being proud of Babri Masjid demolition and for her statement on cursing former ATS chief Hemant Karkare who died in the Mumbai terror attack.

The battle for Bhopal is expected to be keenly fought with both Sadhvi Pragya and Digvijaya expressing their confidence. The constituency votes in the sixth phase this Sunday.