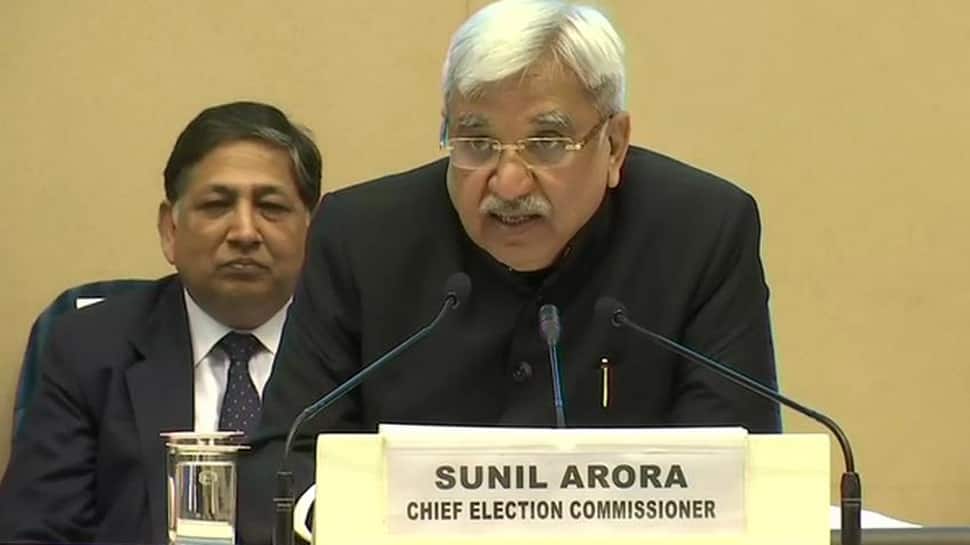 NEW DELHI: India will vote for the 17th Lok Sabha in seven phases from 11 April to 19 May. The counting of votes will take place on May 23 and result will be declared on the same date as per the Lok Sabha election 2019 schedule announced by the Election Commission of India on Sunday.

In 2014, the election for the 16th Lok Sabha took place in nine phases between April 7 and May 12 while the counting of votes took place on May 16. The Bharatiya Janata Party-led National Democratic Alliance (NDA) secured a massive majority and Narendra Modi took oath as the 14th Prime Minister of India on May 26. BJP created history by becoming the first party other than the Congress to secure an absolute majority in the Lok Sabha. It is also the first party since the 1984 Lok Sabha election to cross the halfway mark of 272 seats.

The 2014 election saw a massive anti-incumbency against the 10-year term of the UPA government which was in stark contrast to the development-oriented promises by the then prime ministerial candidate of the BJP - Narendra Modi. However, five years later, the 2019 election will judge Narendra Modi's tenure as the Prime Minister. The votes will not just be on the basis of the promises made by the BJP but on the basis of how well has his government fared on the promises.

The economic decisions taken by the government like demonetisation, Goods and Services Tax; military actions like the surgical strikes after the attack on an Army base in Uri or the Indian Air Force strikes in the aftermath of the Pulwama terror attack are likely to have an impact on the mood of the people when they go out to vote.

The BJP is facing a tough fight from opposition parties who have come together to form a 'Mahagatbandhan' or an anti-BJP front with the sole objective to defeat the saffron party. Along with the Congress, this grand alliance has active participation of West Bengal Chief Minister Mamata Banerjee, Andhra Pradesh Chief Minister Chandrababu Naidu, Karnataka Chief Minister HD Kumaraswamy along with leaders of several other parties like the Rashtriya Janata Dal and Nationalist Congress Party.

For the Congress too, the election holds special significance as it is the first general election which is being held with Rahul Gandhi as the party chief. The party has also pulled out its trump card - Priyanka Gandhi Vadra - which it had been holding close to its chest for years.

The BJP-led NDA will emerge as the single largest alliance but fall short of a majority in the election, a pre-poll survey by Zee Group's Marathi news channel Zee 24 Taas predicted on Saturday. The survey claimed that the BJP-led coalition is likely to win 264 of the 543 seats in the Lok Sabha while the Congress-led UPA will get 165 seats, followed by other parties and independents who will win the remaining 114 seats.

Along with the Lok Sabha election, assembly polls will also be held in four states, namely Andhra Pradesh, Odisha, Arunachal Pradesh, Sikkim. The polls will be held simultaneously with the parliamentary elections. The term of the Sikkim assembly ends on 27 May 2019 while the terms of Andhra Pradesh, Odisha and Arunachal Pradesh assemblies end on June 18, June 11 and June 1 respectively.

In Jammu and Kashmir, only Lok Sabha election will be held as of now in view of the security situation in the state following skirmishes with Pakistan. The CEC said that poll observers are closely monitoring the situation there. The six-year term in J&K was scheduled to end on 16 March 2021, but the Assembly was dissolved after the ruling coalition between the People's Democratic Party (PDP) and the BJP fell apart. The state is currently under President's Rule, hence the EC is bound to hold fresh polls there as well within a six-month period, which will end in May.

The EVM controversy and calls for VVPAT

Opposition parties have been endlessly demanding that the elections be held on ballot paper alleging the possibility of the electronic voting machines (EVMs) being hacked and tampered with. They have been urging the ECI to extensively use the Voter-Verifiable Paper Audit Trail (VVPAT) system to cross-check votes. The VVPAT device is attached to an EVM and prints a small slip of paper carrying the symbol, name and serial number of the candidate voted for. This is visible to the voter for a short period, and can be later used by the ECI to verify the votes.