The high-pitched political campaign continued across the country on Saturday with leaders from several parties wooing voters for the Lok Sabha Election 2019.

The high-pitched political campaign continued across the country on Saturday with leaders from several parties wooing voters for the Lok Sabha Election 2019.

Thank you for joining us. Do come back again on Sunday (April 21) for live updates of Lok Sabha election 2019.

* Election Commission issues a show-cause notice to Congress leader Navjot Singh Sidhu for allegedly warning the Muslim voters in Bihar about the division of votes.

Election Commission of India has issued a notice to Punjab Minister Navjot Singh Sidhu seeking an explanation within 24 hours for his remarks 'urging Muslims to not split votes,' made during a rally on 16 April in Katihar, Bihar. (File pic) pic.twitter.com/n2CT5VR3VO — ANI (@ANI) April 20, 2019

* TMC writes to Election Commission of India against Ajay V Nayak, special observer for Bengal, for his reported comments 'present condition of Bengal is like it used to be in Bihar 10 years ago' and that 'everything is not well with democracy in Bengal', reports ANI.

TMC writes to Election Commission of India against Ajay V Nayak, special observer for Bengal in #LokSabhaElections2019 , for his reported comments, 'present condition of Bengal is like it used to be in Bihar 10 years ago' & that 'everything is not well with democracy in Bengal' pic.twitter.com/pSQEa18oS9 — ANI (@ANI) April 20, 2019

* Congress, SP-BSP have no vision for the country, says PM Modi

* PM Modi arrives in Bareilly to address an election rally.

* Few weeks ago I said something about Balakot, immediately PM started tweeting, head of BJP party went wild, called a press conference. Congress leaders started calling me why did you say that? I said what did I say? I said the truth: Sam Pitroda, Indian Overseas Congress Chief

Election Commission to Eros Now: It was brought to our notice that a web series "Modi-Journey of a Common Man, having 5 episodes is available on your platform. You're directed to stop forthwith the online streaming & remove all connected content of the series till further orders pic.twitter.com/ofs0neJMc3 — ANI (@ANI) April 20, 2019

Bhopal: A notice has been issued to Pragya Singh Thakur by District Election Officer and Collector under model code of conduct seeking an explanation from her for her comment on Late Hemant Karkare within a day. (File pic) pic.twitter.com/cqnjQwRIRN — ANI (@ANI) April 20, 2019

* There are no details on assets and profits of the company mentioned in the affidavit. There are a number of mistakes in his educational qualification certificates. The original educational certificates should be presented so that his (Rahul Gandhi) claim can be established: Ravi Prakash

* On basis of a certificate of incorporation of a company registered in the UK, he (Rahul) declared himself a UK citizen. A non-citizen can't contest polls here: Ravi Prakash, lawyer of independent MP candidate from Amethi, Dhruv Lal who has raised objections on Rahul Gandhi's nomination papers.

* Those who feel discomfort chanting 'Bharat Mata Ki Jai' and Side with those saying 'Bharat Tere Tukde Honge' can do nothing for the progress of India: PM Modi at Araria rally in Bihar.

* Trends of first two phases of LS polls have dampened the spirits of those seeking proof of air strikes: PM Modi at Bihar rally. 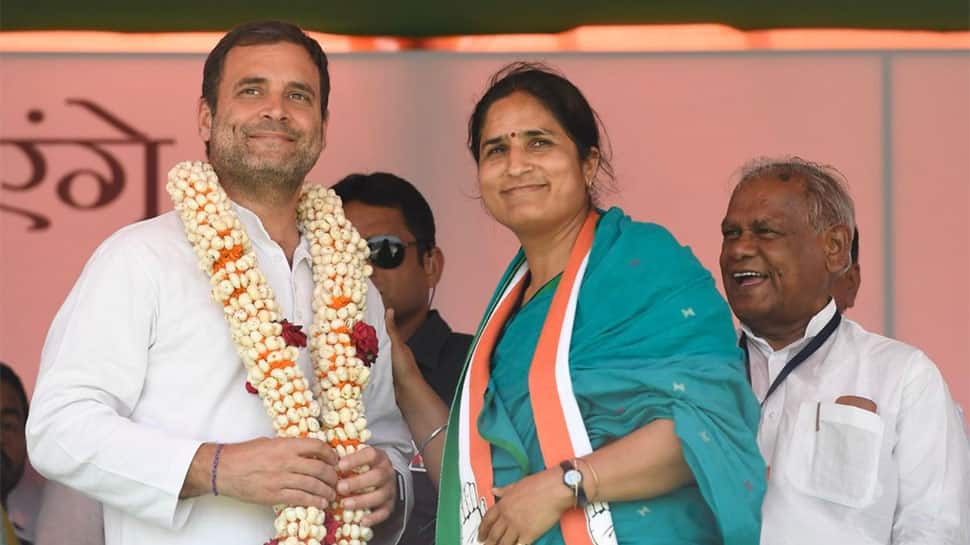 * I stand here on behalf of a man who I've known from the day I was born. He'll be your candidate in this election&over last 10 yrs has faced massive personal attack from his opponents. They've sought to portray a character of his which is very far from truth: Priyanka at Wayanad, Kerala

* Priyanka Gandhi Vadra, Congress in Wayanad, Kerala: "Five years ago, a government came into power that was voted in with a big majority. In all their wisdom, people of our country placed their faith and hopes in BJP government. That government, from the moment it came to power, began to betray that faith. They began to believe that power belonged to them and not people. 1st indication of this gross misunderstanding came when their own President declared shortly after the election that promise of Rs 15 Lakh in every bank a/c was just for sake of elections, what he called a 'jumla'."

* "It's a party's right to field any candidate they want for elections, I would not like to comment on that but saying something against an officer who sacrificed himself fighting terrorism isn't right. Although she withdrew her statement it shows her mentality," says Ahmed Patel, Congress.

"We are not only hopeful but also very confident that BJP will lose. We will get good results in Gujarat too, we will cross double digit. On 23rd May when the election results come, BJP will no longer be in the government," he added.

* It is shameful that people from neighbouring country are campaigning for the TMC, which was done to appease the minority community: PM Modi at Buniadpur rally

*  In Purulia, a BJP worker was murdered. I want to assure each West Bengal BJP worker& people of the state that justice will be done. Strict action will be taken against those people who are responsible: PM Modi in Bengal

* "It is written in the Vedas that a government should be like a bhawra (beetle) which sucks nectar from flowers but still it blooms. The Modi government has become a leech that is sucking the blood of the common man. The common man can't even stand," said cricketer-turned-politician Navjot Singh Sidhu Friday.

* "He can speak but misusing his office is wrong. Several PMs ruled this country, several times India-Pakistan war took place. Nobody took advantage about that issue for personal benefit," Karnataka CM HD Kumaraswamy on PM Modi speaking on Balakot airstrike in electoral speeches

* "I am being treated as if I am an anti-national or a traitor. They are treating me as if I am the biggest terrorist in this world. Had it been within the limits of their power, the administration would have openly killed me by firing a shot at me," said Azam Khan while addressing a public rally at Rampur on Friday.

The move comes just a day after Lok Sabha and by-elections to 18 assembly seats concluded in Tamil Nadu and days after the Supreme Court had chastised the group led by former AIADMK leaders Dhinakaran and V K Sasikala for not registering AMMK as a political party.

Adityanath, who resumed campaigning on Friday after a 72-hour EC ban, will hold rallies in UP's Moradabad, Farrukhabad and Kannauj. Union home minister Rajnath Singh will hold rallies in UP's Jhansi, Jalaun, Raebareli and Hamirpur while BSP supremo Mayawati will be in UP's Rampur and Firozabad. Lok Janshakti Party leader Chirag Paswan along with Bhojpuri singer Pawan Singh will hold a road show in Bihar's Khagaria.

Priyanka Gandhi, the Congress General Secretary, and Smriti Irani, the Union Minister and BJP leader, will be in Kerala's Wayanad from where Congress chief Rahul Gandhi is contesting the Lok Sabha election for the first time. Priyanka Gandhi will hold public meetings while Irani will hold a roadshow.