Amma Makkal Munnetra Kazhagam will also be registered as a political party. 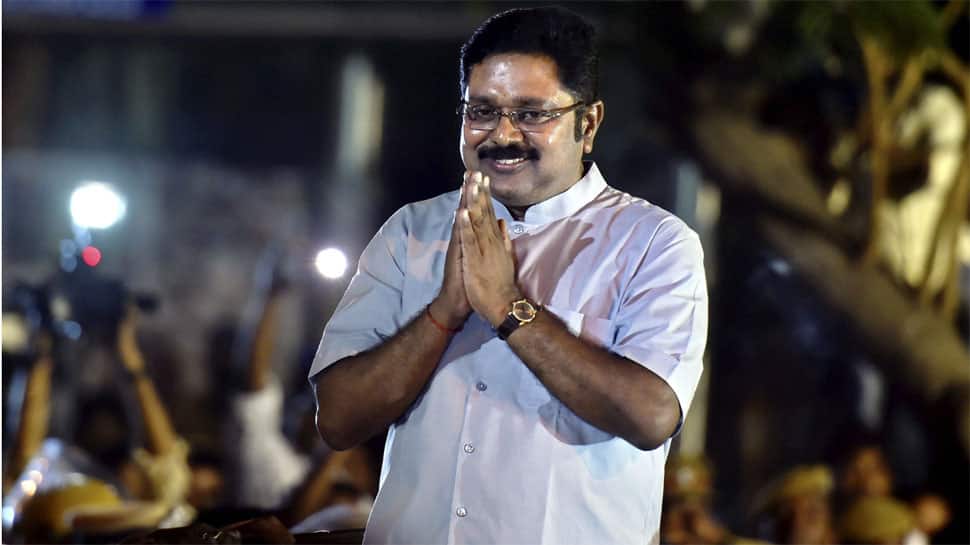 Chennai: Amma Makkal Munnetra Kazhagam leader T T V Dhinakaran was Friday unanimously elected its general secretary, even as a decision was taken to have it registered as a political party.

The move comes just a day after Lok Sabha and by-elections to 18 assembly seats concluded in Tamil Nadu and days after the Supreme Court had chastised the group led by former AIADMK leaders Dhinakaran and V K Sasikala for not registering AMMK as a political party.

At a meeting held at the AMMK headquarters here, it was decided that Sasikala, currently general secretary, would be elevated as president after her four-year imprisonment in a disproportionate assets case ends.

"The deputy general secretary Dhinakaran has been unanimously elected as AMMK's general secretary. Also, as informed to the Supreme Court by our advocate, a decision to take steps to register AMMK as a political party was also taken today," AMMK spokesperson C R Saraswati told PTI.

"The post of president would be allotted to our leader V K Sasikala soon after she is released," she added.

When asked if the move would weaken Dhinakaran and Sasikala in the legal fight claiming themselves as 'true heir' of AIADMK, Saraswati said, "Not at all."

"EC has given the symbol to them (faction led by TN Chief Minister K Palaniswami) and we went to court. Though the judgment is not in our favour, our leader 'chinnamma' (Sasikala) has all the right to file a review petition," she said.

Expressing confidence that Sasikala would continue fighting the legal battle staking claim in the AIADMK and its symbol, AMMK leader Thanga Tamilselvan said 'Chinamma' was already a general secretary of the AIADMK and she would deal with the case by continuing to stay in that position.

Responding to the developments, AIADMK leader and Fisheries minister D Jayakumar said according to EC rules any party can be registered and can receive recognition only if it secures 6 per cent votes.

"AMMK would only secure one or two per cent votes and it would continue to remain just as a group," he claimed.

Dhinakaran had floated Amma Makkal Munnetra Kazhagam (AMMK) after he and Sasikala were expelled from the Palaniswami-led AIADMK.

On February 28, the Delhi high court had dismissed the pleas of Dhinakaran and Sasikala challenging the EC order granting the 'AIADMK' name and the 'two leaves' symbol to the faction led by Tamil Nadu chief minister, saying the figures showed the Palaniswami-led group "enjoyed a clear majority".

The symbol issue has been lingering since April 2017 and the verdict came as a shot in the arm for the Palanisami-led AIADMK ahead of the Lok Sabha polls.

Dhinakaran and Sasikala challenged the EC order in the Supreme Court following which it agreed to hear it on the limited aspect of allowing use of 'pressure cooker' as a common symbol.

The apex court, on March 26, dashed the hopes of the Dhinakaran-led faction for getting the 'pressure cooker' symbol exclusively for Lok Sabha and assembly by-elections, but asked the Election Commission to allot a common free symbol to it.

The bench of Chief Justice Ranjan Gogoi and Justices Deepak Gupta and Sanjiv Khanna asked senior advocate Kapil Sibal, appearing for Dhinakaran, as how it can allot common symbol of 'pressure cooker' to the group, which is not recognised or registered by the election commission.

The bench said the fact of the matter is that the two-leaves symbol issue is now over and the Dhinakaran-led group has not applied to the election commission for registration as a political party.

The symbol issue has been lingering since April 2017 in the aftermath of the announcement of the bypoll to Radha Krishnan Nagar constituency in Tamil Nadu following the death of AIADMK supremo J Jayalalithaa in December 2016.

Earlier, rival factions led by Sasikala and Panneerselvam had staked claim over the symbol. Palaniswami was then in the Sasikala camp. Later, a large number of legislators led by Palaniswami revolted against Sasikala.

Sasikala, late Jayalalithaa's close aide, has been lodged at the Parappana Agrahara Central Jail in Bengaluru since February 2017, when the Supreme Court upheld her conviction by a special court in a disproportionate assets case and sentenced her to four years imprisonment.