The TMC MP has accused the PM of making "wildly fabricated allegations" against him at a rally at West Bengal's Diamond Harbour on Wednesday.

In his legal notice, Banerjee claimed that the PM's speech, which was widely aired on media channels, was aimed at harming his and his party chief' Mamata Banerjee's reputation.

TMC leader & nephew of West Bengal CM Mamata Banerjee, Abhishek Banerjee through his lawyer sends a defamation notice to Prime Minister Narendra Modi for alleged derogatory remarks made against him in a public rally on 15 May, held in Diamond Harbour in West Bengal. (file pic) pic.twitter.com/3kYEcyiQBu — ANI (@ANI) May 18, 2019

"Your speech, punctuated by false, malicious and defamatory content, was an embodiment of political calculation and mischievous intent. Your imputations were deliberate and mala fide, perpetrated through thinly veiled references of bhatija (nephew) and didi while being fully aware that Mamata Banerjee is referred to as didi and my client is her only nephew," the legal notice said. 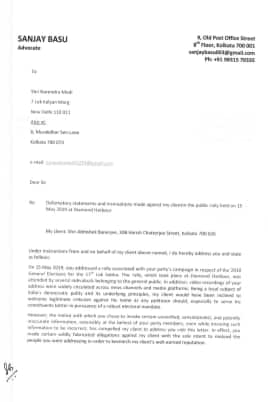 Abhishek, who is seeking re-election from Diamond Harbour Lok Sabha constituency in the final phase of the Lok Sabha elections, had earlier warned that PM for saying that ''the TMC MP had illegally occupied some building in his constituency, including the one In which he manages his office.'' He had sought an apology from the PM within 24 hours, failing which, he said, a defamation notice will be sent to the PM.

Addressing a rally here on Wednesday, Prime Minister Narendra Modi had launched a scathing attack on the Trinamool supremo and her nephew, accusing them of running the "bua-bhatija model of governance" and turning "gantantra" (democracy) into "gundatantra" (hooliganism).

"We are fighting against the atrocities of Trinamool as people are fed up with them," he said.

Abhishek is pitted against the BJP's Nilanjan Roy. The PM had campaigned in Roy's support on Wednesday.

Diamond Harbour, however, poses a tough challenge for the Bharatiya Janata Party (BJP) candidate Nilanjan Roy. Unless he can ensure a substantial vote swing from the Trinamool and the Left to the saffron party, defeating Banerjee would not be easy for Roy.

A big plus for Banerjee is the 36 per cent Muslim electorate in his constituency, whose votes are expected to consolidate in favour of Trinamool Congress in line with the ongoing trend of polarisation.