PM Modi said the 'Sankalp Patra' of BJP is a "multi-layer and multi-dimensional" document. 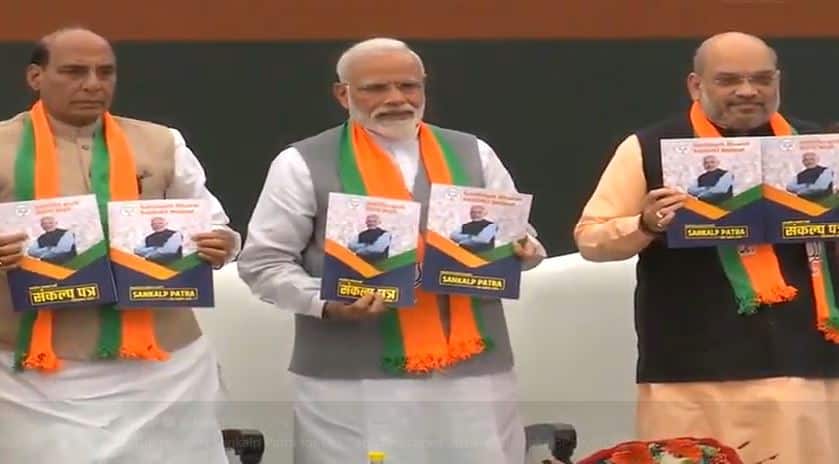 NEW DELHI: Releasing the BJP's Sankalp Patra for Lok Sabha poll, Prime Minister Narendra Modi on Monday asserted that nationalism is the inspiration of the BJP and inclusion and good governance its mantra.

PM Modi said the 'Sankalp Patra' of BJP is a "multi-layer and multi-dimensional" document which has been designed to address the expectations and aspirations of all sections of the society.

Modi said BJP's 'Sankalp Patra' is aimed at making India a developed nation by 2047, on completion of 100 years of Independence.

"Our aim to change India from a developing country to a developed country. We want to fight poverty rather than sit inside air conditioned rooms. Nationalism is our inspiration and inclusion and good governance is our mantra," he said.  "We first addressed needs of the people, now we will fulfil their aspirations," the prime minister said.

Speaking at the launch of 'Sankalp Patra's launch, BJP president Amit Shah said, “In five years, the government led by Prime Minister Narendra Modi has taken 50 major decisions for the betterment of the country. From 2014-19, our government has transformed the country... these have been the golden years”.

In its Sankalp Patra, the BJP has promised to give pension to small and medium farmers and shopkeepers. The announcement is seen as a counter to Congress' promise to give a grant of Rs 72,000 to the poorest 20% households in the country after winning the Lok Sabha poll.