No dual citizenship: Rahul Gandhi gets green signal to contest from Amethi

Amethi's returning officer on Monday declared that Rahul Gandhi's nomination is valid, clearing the way for the Congress president to once again contest the Lok Sabha election from here.

New Delhi: Amethi's returning officer on Monday declared that Rahul Gandhi's nomination is valid, clearing the way for the Congress president to once again contest the Lok Sabha election from here.

A day earlier, the Bharatiya Janata Party (BJP) had pointed to alleged discrepancies in Rahul's election affidavit over his citizenship and educational qualifications. "The whole nation is stunned that Rahul Gandhi and his lawyer Rahul Kaushik were unable to explain some details of Gandhi`s nomination papers sought by Amethi`s returning officer," BJP spokesperson GVL Narsimha Rao had said. (Full report here)

On Monday, however, the nomination of Amethi's sitting MP was deemed valid. 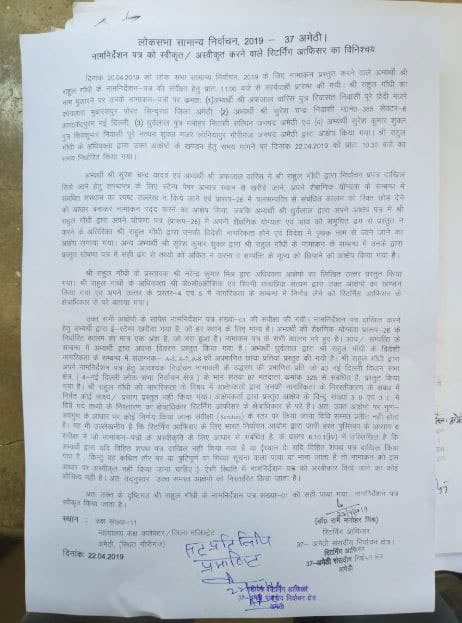 On the same day, Kaushik - Rahul's lawyer - said that there was absolutely no discrepancy in his client's nomination details. "Rahul Gandhi was born in India and he holds an Indian passport, he never took citizenship of any other country. His passport, Voter-ID, and his income tax, everything is of India," he told news agency ANI. "Rahul Gandhi had done his M.Phil in 1995 from the University of Cambridge, I have attached a copy of the certificate."

An independent candidate from Amethi, Dhruv Lal, had previously filed a petition in which he sought to know Rahul's educational qualification and citizenship. Meanwhile,  NDA candidate from Kerala's Wayanad, Tushar Vellappally, had also filed a complaint with CEO Kerala in which he sought a review of Rahul's nomination from here. (Full report here)

Rahul is contesting the Lok Sabha election 2019 from both Amethi and Wayanad.