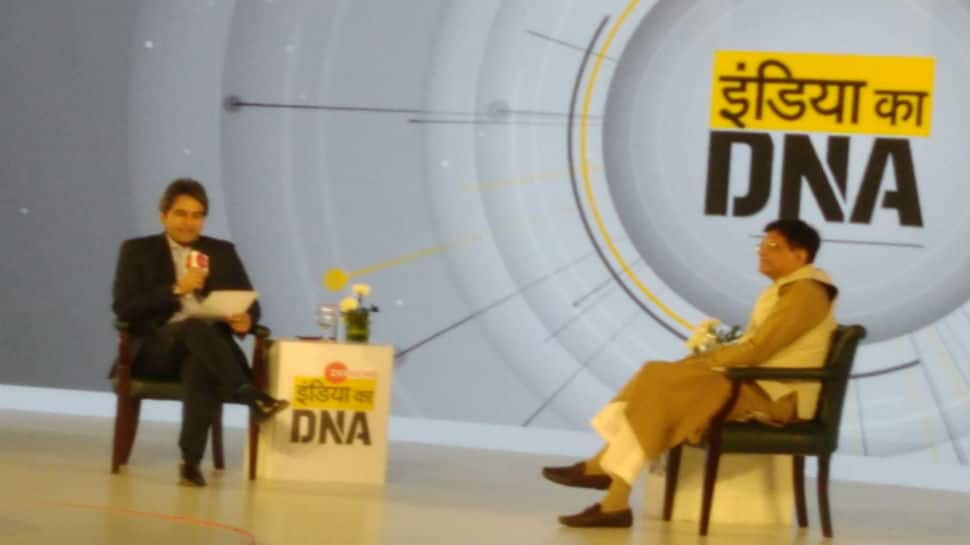 New Delhi: Union Minister for Railway Piyush Goyal on Monday said that the Narendra Modi government has ensured that India has rapidly moved on the path of progress and development. He also attacked Congress and accused Rahul Gandhi of running away from a fight.

At Zee News' India Ka DNA conclave, Goyal said that PM Modi has provided inspirational leadership which has made every Indian feel proud and more secure. "The last five years have been a golden period for India. The journey of the last five years has seen Narendra Modi give a new DNA to the country. It has changed tremendously.  Now the country is safe and secure, and is developing. The leadership is strong, decisive and development-oriented," he said. "The USP of the country is Modi's strong leadership and the potential of the people. The entire world is looking towards India today and they are standing with us on all the issues, be it tackling terror or dealing with corruption. NDA will get two-thirds majority in the Lok Sabha election and will take along all our allies."

Goyal also trained his guns on previous governments for having left India vulnerable. "In 2014 India was among the most fragile economies. In the last three years,  India has been among the five fastest growing economy. We are the fastest growing economy today. The opposition has no issue, so it is trying to raise questions about irrelevant issues and data," he said, adding that there is no job crisis - a major charge against Centre from Congress in particular. "There has been development and progress while our government has controlled inflation and price rise. It has never happened in the country's history that there has been progress and development for five years. For us, it is the nation first, party next and self last."

Questioned on Congress casting aspersions on the Balakot strike by the Indian Air Force, Goyal said that it was their folly. "Opposition talking just about Balakot is idiotic. We have done so many development work. We are seeking vote on the basis of development. But we want to make it clear that if anyone tries to attack us, then we will give a befitting reply. Congress leadership has no will to act against terror," he said, adding that Congress' NYAY scheme for the poor is an idealistic dream. "NYAY scheme is just a false promise. It is like a 'sheikh chilli ke sapne'. NYAY scheme will push the country towards poverty. Our government wants to make the country self-reliant and not a poor country. Congress should explain how they will fund the NYAY scheme. Our schemes are to help farmers and it is not a dole to them."

Targeting Rahul Gandhi for his decision to contest from Amethi as well as Wayanad, Goyal said it was because of the Congress president's failures that he had to look at Kerala for reprieve. "He is so scared of Smriti Irani in Amethi that he had to look for a gateway in the South. The fact of the matter, however, is that whether his sister (Priyanka Gandhi Vadra) comes or his brother-in-law (Robert Vadra), no one can save Rahul. His being projected as our main opponent works for us because it ensures even more seats for us. One of them (Rahul) has failed, the other (Priyanka) has failed to take off."

Speaking about his own ministry, Goyal said he has worked overtime to ensure trains in India are punctual. "Trains in India have been running late for the last several years. But during my review meetings, I found that 90% of trains run on time. I did a root cause analysis. I found that data was recorded by the station master recording the timings of trains. We got data loggers to record the time. There were 96 data loggers. If any officer tried to fudge, then he or she was suspended. The data loggers revealed that the data was fudged by almost 25%," he explained.