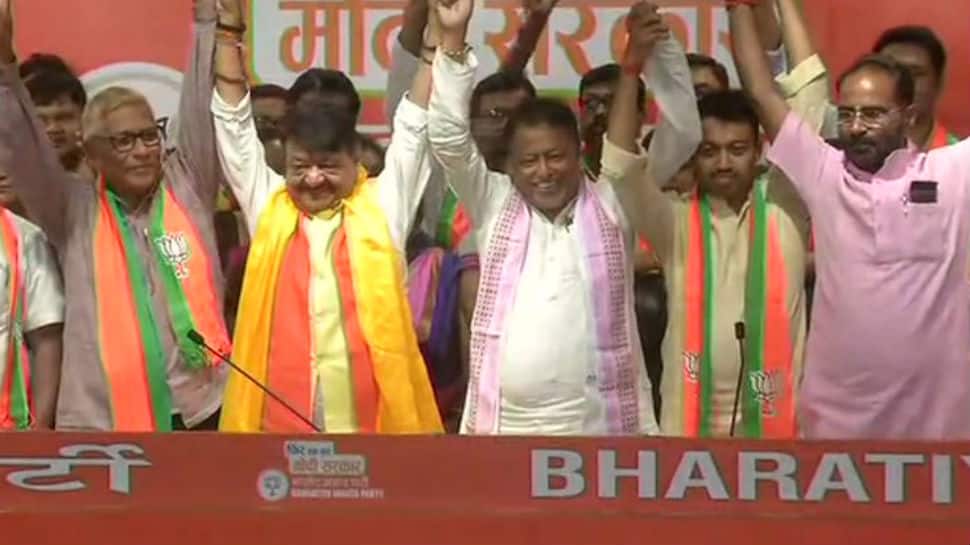 New Delhi: In what would come as a big blow to Mamata Banerjee, a Trinamool Congress (TMC) MLA joined the Bharatiya Janata Party (BJP) on Tuesday. Additionally, one CPM MLA, one Congress MLA and at least 50 TMC councillors also switched allegiance to the saffron party.

The TMC MLA who crossed over to BJP was Subhranshu Roy - son of BJP leader Mukul Roy who was suspended by TMC for six years for anti-party comments - from Bijpur. Congress' Tushar Kanti Bhattacharjee from Bishnupur and  CPM's Debendra Nath Roy from Hemtabad joined the party. They were welcomed to the party by BJP general secretary and party in-charge for West Bengal Kailash Vijayvargiya. "This is only the start. PM Narendra Modi had said during campaigning that many MLAs from TMC had reached out to us. TMC had denied this but today, you can see what the state of the party is. This is a result of what Mamata has done in West Bengal. " he said. "Like the elections were held in seven phases in West Bengal, joinings in BJP will also happen in seven phases. Today was just the first phase."

Vijayvargiya also said that there are many from TMC who have expressed their interest to join the BJP but not everyone would be selected. "There are many people who feel suffocated in TMC and have been reaching out to us. It is not our fault. We will have a selection process for them."

Denying accusations from Mamata that BJP is indulging in horse-trading, Roy said that she should introspect rather than point fingers. "TMC has indulged in wide-spread and rampant violence and not many in their party is okay with that. They are coming to us out of their own free will," he said, adding that BJP will register a thumping performance in the Assembly election in West Bengal in 2020.

In terror-hit Tral, BJP registers stunning lead for the first time ever