Ulta chor chowkidaar ko daante, BC is Before Congress, AD is After Dynasty: PM Narendra Modi's jibes at Congress

The Prime Minister took a dig at the Congress saying that the party was never sensitive towards people's aspirations and was more focused on promoting corruption. 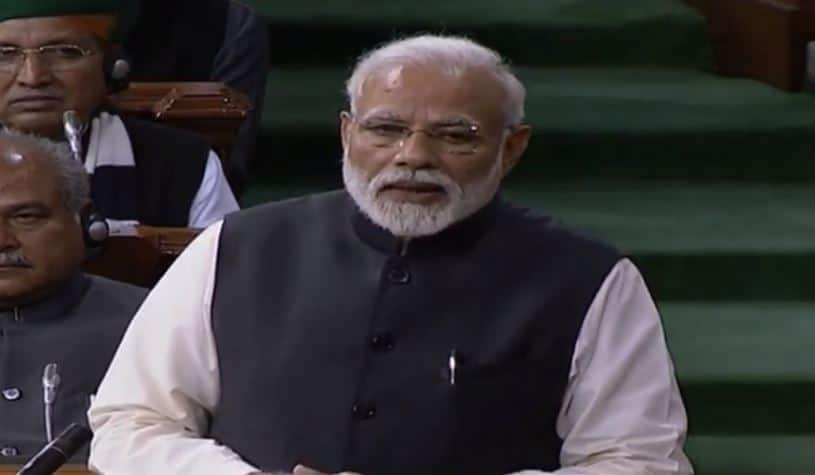 NEW DELHI: Prime Minister Narendra Modi on Thursday replied to the debate on the motion of thanks in the Lok Sabha to the President's address and used his address to launch a scathing attack on the Congress.

The Prime Minister took a dig at the Congress saying that the party was never sensitive towards people's aspirations and was more focused on promoting corruption.

He also mocked the Congress for targeting the BJP-led government at the Centre for price rise saying price rise and Congress are a team. He added that whenever Congress comes to power, the prices of essential commodities start to rise.

The Prime Minister remarked that the Congress leaders see things in two time periods. BC - Before Congress, when nothing happened. AD - After dynasty, where everything happened.

The PM also quoted Dr Babasaheb Ambedkar and said that he had said that joining Congress is like committing suicide.

In a scathing attack on the Congress, the PM said that in hating Modi, the opposition has begun to hate the nation. He also took a potshot at the Congress for sponsoring a press conference in London to show India in bad light.

Attacking the Congress for supporting dynasty politics, PM Modi said that his only crime is that he belongs to a poor family and is challenging their Sultanate.

Addressing the Rafale jet issue, the PM said that the Congress was making efforts to weaken the Air Force. "You had left Army handicapped; it was not in a position to carry out surgical strikes," Modi remarked.

The PM said that the Congress is accusing BJP of destroying institutions and they forget that it was Congress which imposed Emergency.

Attacking the Congress for claiming that Modi government has failed to create jobs in the country, the PM said: "In the past four years, there are over 6 lakh 35 thousand new professionals in the country. Do you think a doctor has opened his clinic or nursing home, he will only be given a job to a person, or a chartered accountant will only be running his office by placing one person on the job? No."