"I am happy and proud joining BJP," Jadhav said before Modi arrived on the stage. 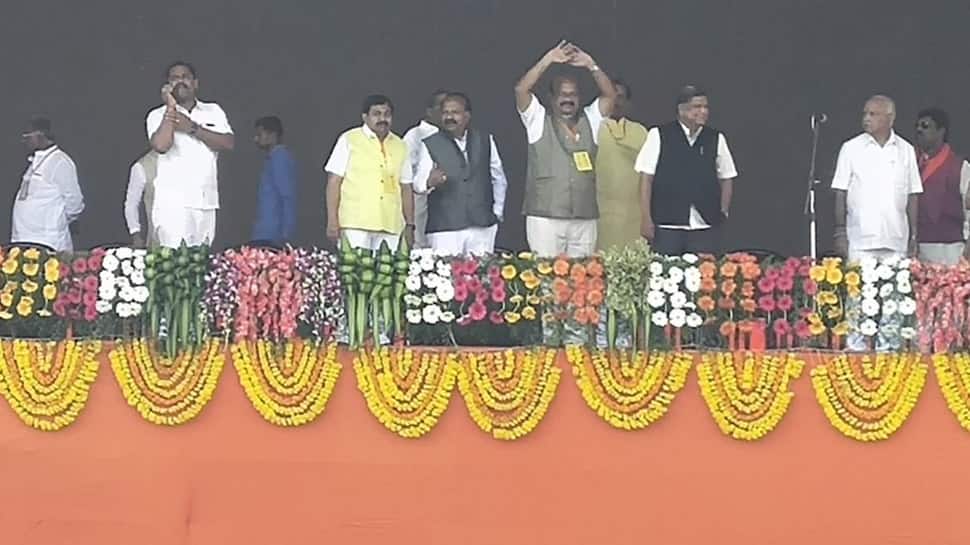 Kalaburagi: Congress rebel MLA Umesh Jadhav joined the BJP at a rally here on Wednesday, two days after he quit the Karnataka Assembly membership, and is tipped to take on Congress veteran Mallikarjun Kharge in the coming Lok Sabha elections.

Jadhav joined the BJP before Prime Minister Narendra Modi's address at the rally, in the presence of state BJP president B S Yeddyurappa, former chief minister Jagadish Shettar and a host of other party leaders. "I am happy and proud joining BJP," Jadhav said before Modi arrived on the stage.

He also sought blessings from the people of Kalaburagi to make Modi Prime Minister again.

BJP sources said Jadhav is likely to be the party's Lok Sabha candidate for the Gulbarga seat to challenge Kharge, a nine-time MLA and two-term Lok Sabha member who has never tasted electoral defeat. Jadhav had Monday submitted his resignation from the Assembly to Speaker Ramesh Kumar.

The Congress has petitioned the Speaker seeking disqualification of Jadhav along with Ramesh Jarkiholi, B Nagendra and Mahesh Kumathali under the anti-defection law.

The four MLAs had kept the party on tenterhooks for several weeks, defying its whip twice to attend the Congress Legislative Party (CLP) meetings on January 18 and February 8 and had skipped the early part of the budget session.

After the MLAs refused to fall in line, the Congress had petitioned Speaker to disqualify them under the Anti-Defection Law. However, Jadhav along with other three MLAs had attended the session and voted in favour of the finance bill, with an intention not to violate whip and avoid any stringent action.

Jadhav was upset with Congress against the alleged dominance by veteran party leader Kharge and his son Minister Priyank Kharge in the region. He was against Priyank Kharge getting Ministerial berth from the region, ahead of several senior Congress leaders including himself.

Jadhav's quitting the Congress has come after two other senior leaders, Baburao Chinchansur and Malikayya Guttedar, from the region, quit the party and joined the BJP, allegedly against the dominance of the Kharge.

Jadhav is likely to face some hurdles ahead of his candidature for the Lok Sabha polls, as a petition to disqualify him was still pending before the Speaker.

"The petition to disqualify Jadhav is still pending... Without disposal of this petition his resignation cannot be accepted as per law, in my knowledge," Congress Legislature Party leader Siddaramaiah said on Tuesday. However, whether to accept the resignation or not is ultimately left to the Speaker as he is the ultimate authority, he had added.