She said her party has had discussions with several regional parties and the BJP and the Congress need to be rooted out. 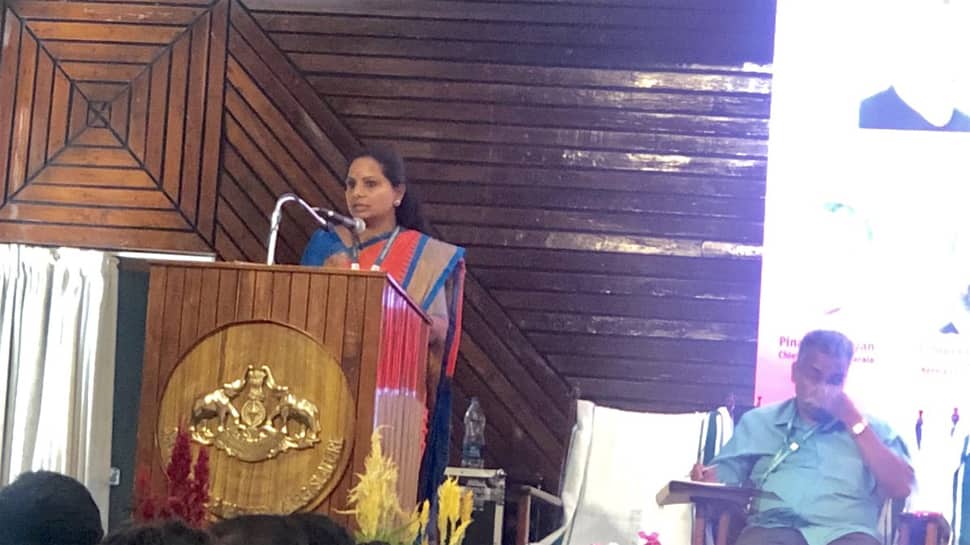 Thiruvananthapuram: TRS MP K Kavitha has said regional parties would play a greater role in the general elections and it was time for a federal front to come to power, as the BJP and the Congress "got ample opportunities but did not fulfil their promises".

Interacting Saturday with the media at a programme -- 'meet the press' -- organised by the Press Club of Thiruvananthapuram, she said her party has had discussions with several regional parties and the BJP and the Congress need to be rooted out.

"The two parties got ample opportunities and they have not fulfilled their promises. How can they ask for votes?" said Kavitha, daughter of TRS supremo and Telangana Chief Minister K Chandrasekhar Rao.

She said the fundamental agenda of the alliance of regional parties would be not to tie up either with the BJP or the Congress.

"Regional parties will play a greater role in this election. While playing that role, we want to make sure that the BJP and the Congress are kept away from power. It's high time as we have given them ample opportunity. It's time for someone else to take charge," she said.

The Nizamabad Lok Sabha MP said, "We want to make sure that a non-BJP, non-Congress alliance comes to power in this country. We will work very hard for that. We have already began the work."
Kavitha opined the proposed alliance of regional parties should not be called a 'third front', but a 'federal front'.

"Because you never know, we might surprise you and emerge as the 'first front'."

She said states should have more freedom to decide on various important issues like reservation, education and health.

"So, we call this a federal front and we are working with like-minded parties. Many parties are on board. We are overtly and covertly working with various parties. Once the elections are over, you will see what shape the Federal front is going to take," she said.

"The front will be driven by an agenda to make sure that the nation makes progress."

She lashed out at the Narendra Modi-led NDA government alleging it failed to fulfil the promises made to the people of the country.

Kavitha also questioned Prime Minister Narendra Modi's assertion that his government has ensured power supply to 18,000 villages where there was no electricity before 2014.

She said promises made by political parties during election campaigns should be fulfilled.

"Modiji...Came to power and made a promise that 33 per cent women reservation bill would be taken up. Five full years have passed. The BJP government was in full majority and they have comfortable majority in Rajya Sabha as well.

"Why have they (BJP) not introduced the bill? Should not the women of the country question them? Should not be a political party be held accountable for the promises made? We (TRS) have fulfilled our promises," she said.

She said the BJP and Congress ruled this country for 75 years and asked "how many opportunities have they missed". "I think it's time for a change and for a new leadership to take charge." She was also critical of the current reservation policy of the country.

"Each state has got a different demography. How can the same reservation policy be effective for the all the states...States should be given more freedom to decide on these matters.

"The states are more informed about these issues. The Centre should be focusing more on foreign policy and international issues, monetary issues, internal security," she said.

She praised the Kudumbashree project of the Kerala government and said her party was "very impressed" by it.

"We have discussed at length the project Kudumbashree as we are very fond of it. We are very impressed with how the women are empowered in Kerala. We are now going to start one food processing industry in every constituency of Telangana. The self help group of women will be involved in the project," she said.

Will hold next 'Mann ki Baat' in May after Lok Sabha election, says PM Modi