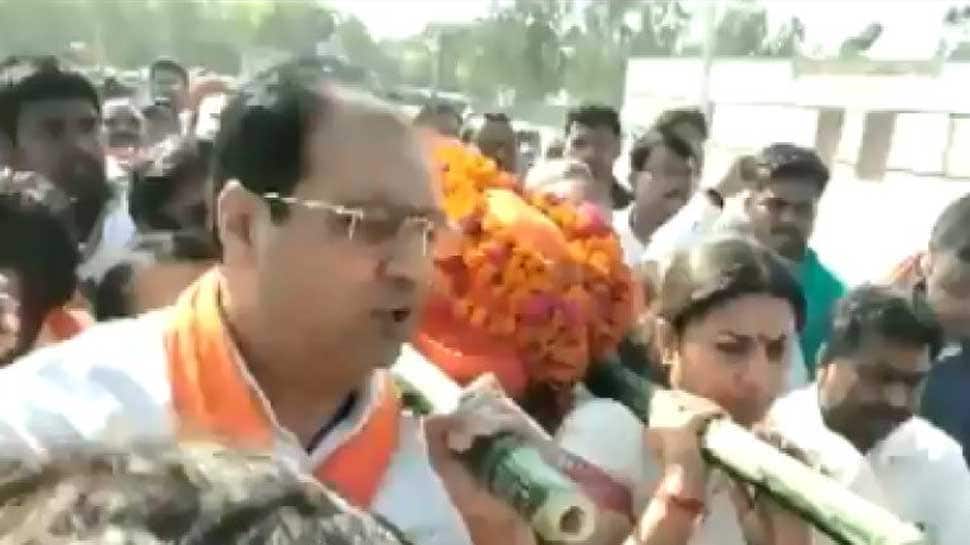 AMETHI: BJP leader Smriti Irani, who recently got elected from Amethi Lok Sabha constituency by defeating Congress president by over 50,000 votes, on Sunday lent a shoulder to the mortal remains of her close aide Surendra Singh, who was shot dead last night.

Singh was the ex-village head of Barauli in Amethi.

Upon reaching here, Irani met the family members of the deceased and attended the cremation.

The BJP lawmaker even carried the mortal remains of the deceased before cremation.

Surendra Singh`s son Abhay alleged that Congress workers were behind his father's murder.

"We could not see the perpetrators but it is clear that Congress workers are behind this. My father was actively campaigning for Smriti Irani and the BJP," Singh told reporters.

He said that his brother wielded considerable influence in his village as well as in adjoining villages and this led to his murder.

The post-mortem of the deceased was carried out in Lucknow after which the body was brought to Amethi.

A large number of BJP leaders were present outside the post-mortem house and in Amethi.

Uttar Pradesh Minister Mohsin Raza, who is in charge of Amethi, said the killers would be arrested within 24 hours.

Director General of Police (DGP) OP Singh said that seven suspects had been detained in connection with the murder and were being interrogated.

He said the police had got crucial leads in the matter. Three companies of the Provincial Armed Constabulary (PAC) had been deployed in Barauliya village where the murder took place.

Chief Minister Yogi Adityanath has directed the DGP to ensure the arrest of the killers at the earliest.

Surendra Singh was shot dead while he was sleeping outside his house. The assailants came on motorbikes and sprayed him with bullets.