Poonam Sinha is a Samajwadi Party candidate from Lucknow. 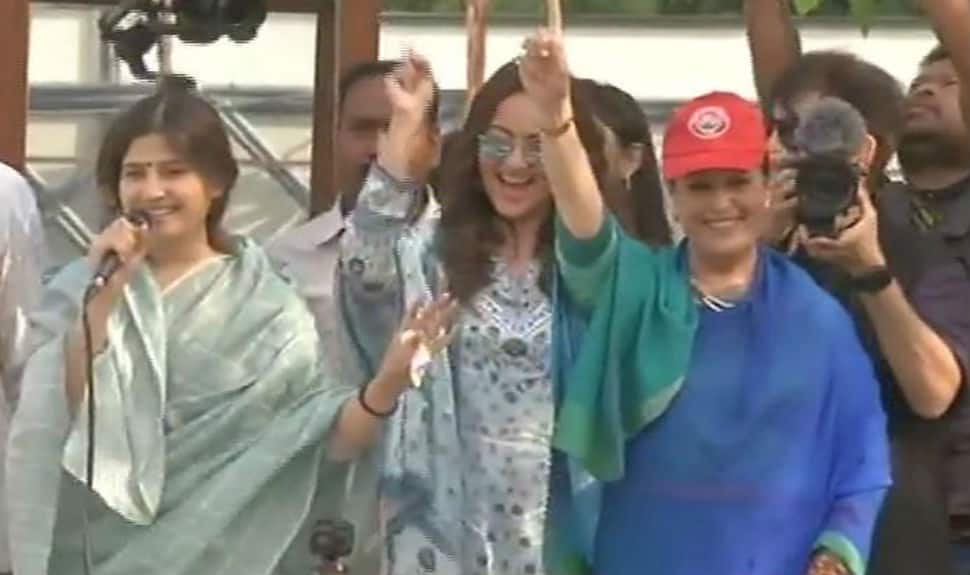 Lucknow: Actress Sonakshi Sinha arrived in Lucknow on Friday to campaign for her mother Poonam Sinha, who is a Samajwadi Party candidate from the state capital.

Sonakshi was accompanied by her brother Kushh Sinha and along with them, SP MP Dimple Yadav (Akhilesh Yadav's wife) was also there.

Pictures of Sonakshi waving at the crowd in Lucknow have been shared by news agency ANI on Twitter while the actress also added some moments from the campaign to her Instagram profile.

The roadshow that moved through three Assembly constituencies covered a distance of about 6 km, across the old parts of the city.

Poonam Sinha made her debut in politics last month. She will be fighting on SP ticket against Home Minister Rajnath Singh in Lucknow, the constituency which is considered to be a stronghold of the Bharatiya Janata Party (BJP).

She filed her nomination on April 18, after which she also held a roadshow. Her husband Shatrughan Sinha was also present to support her. Shatrughan is Congress candidate from Bihar's Patna Sahib Lok Sabha constituency.

Samajwadi Party-Bahujan Samaj Party-Rashtriya Lok Dal are the three parties fighting the election in an alliance in Uttar Pradesh with 37 seats for SP, 38 for BSP and 3 for RLD.

Explaining why she joined the Samajwadi Party, Poonam earlier told Zee News, "I joined the party to bring a change in the country. Akhilesh is a youth icon and I was impressed with his work." She also added that this election, people want change and the Samajwadi Party-Bahujan Samaj Party-Rashtriya Lok Dal alliance will bring that change and Akhilesh's work will be noticed.