PM Modi made these remarks while addressing an election rally in the Kannauj district of Uttar Pradesh. 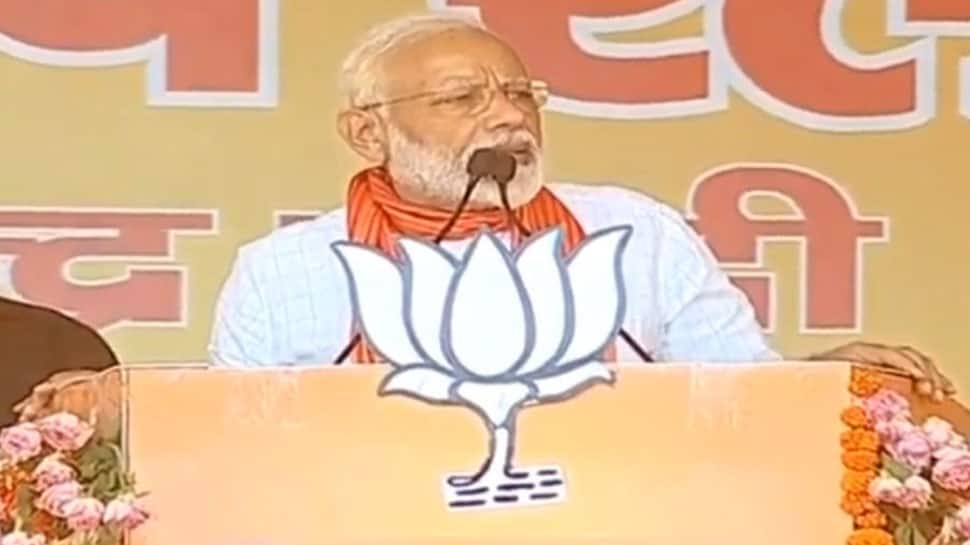 Kannauj: Prime Minister Narendra Modi on Saturday termed the SP-BSP-RLD alliance as an "alliance of opportunists" while addressing an election rally in the Kannauj district of Uttar Pradesh.

During his speech, the PM said that the opposition alliance in Uttar Pradesh wanted a ''helpless government'' at the Centre and not a strong one.

"The mantra of this alliance is 'Jaat paat japna, janta ka maal apna' and it keeps attacking the` chowkidar` because he has checked corruption. This alliance is `mahamilavati`," the PM said.

The PM further said, "Whatever efforts the opposition makes, the result will be 'Phir ek baar','' and the crowd responded with "Modi Sarkar".

The Prime Minister also attacked the Bahujan Samaj Party (BSP) chief, Mayawati, for seeking the support of the Samajwadi Party (SP) "just for the sake of power".

Prime Minister Narendra Modi in Kannauj: 'Behenji' is happily asking for votes for the Samajwadi Party (SP), just for power, just to defeat Modi, you are hugging the people who abuse Babasaheb? pic.twitter.com/l6Dvkfu6wz

PM Modi said, "These parties are the ones which seek evidence of the Balakot air strike and shed tears for the Batla House encounter in which terrorists are killed."

Later addressing a rally in Sitapur, the PM attacked Congress by saying, ''Congress is saying that they will reduce the presence of armed forces in Jammu and Kashmir. Congress wants to repeal sedition law too. Can people with such mentality remove terrorism and Naxalism?''

He also blamed the Congress for showing scant regard for Babasaheb Bhimrao Ambedkar and pointed out that his NDA government has dedicated cashless payments app BHIM in his name.

PM Modi appealed to voters to support the BJP and said, "Your every single vote will directly come into the account of Modi."

Referring to the present row over his caste, the PM said, "Mayawatiji (BSP chief), I am most backward...I request with folded hands not to drag me into caste politics, 130 crore people are my family."

Sharpening his attack on the Congress, PM Modi claimed that the grand old party was ''invisible'' in the country now.

Addressing a rally at the Bandra-Kurla Complex on Friday, Modi had said that since 1947, the Congress had fallen to its lowest tally in 2014.

"The Congress is fighting the least number of seats in 2019. It`s invisible anywhere now," the Prime Minister said.

Taking a dig at Congress, the Prime Minister said the grand old party was another name for ''confusion.''

Claiming that corruption has disappeared from the country in the last five years, PM Modi said that those indulging in corrupt practices were either in jail or were out on bail.

"In the last 5 years, we have increased the number of taxpayers, not tax. Our policies are 180 degrees different from those of the Congress, which the country has witnessed in the last five years," the Prime Minister said.

It may be recalled that PM Modi filed his nomination papers for the Varanasi Lok Sabha seat on Friday. Modi won the Varanasi seat in 2014 with a massive margin of 3.37 lakh votes.

In an impressive show of strength, the entire top leadership of the National Democratic Alliance (NDA) was present at the nomination.

The Prime Minister, in a touching gesture, touched the feet of Akali Dal leader Prakash Singh Badal, one of the senior-most politicians in the country, and sought his blessings.