Khali had been part of BJP candidate Anupam Hazra's campaign in Jadavpur Lok Sabha constituency. TMC says the wrestler is a US citizen and should not be allowed to influence Indian voters.

Kolkata: Several of its own candidates may have brought in Bangladeshi actors to join their respective election campaigns but that has not stopped Trinamool Congress from registering a complaint against wrestler Khali - also known by his real name Dalip Singh Rana - being part of BJP candidate Anupam Hazra's campaign in Kolkata's Jadavpur.

In a letter to the Election Commission, TMC has alleged that Khali campaigned for Hazra despite being an American citizen. "Mr Rana is not an Indian citizen and holds citizenship under the United States of America. Therefore, a foreigner should not be allowed to influence the minds of the Indian electors as he has little or no knowledge as to who should be an appropriate MP in India," the letter to the EC reads. "The BJP is using Mr Rana's celebrity status to misguide Indian voters." 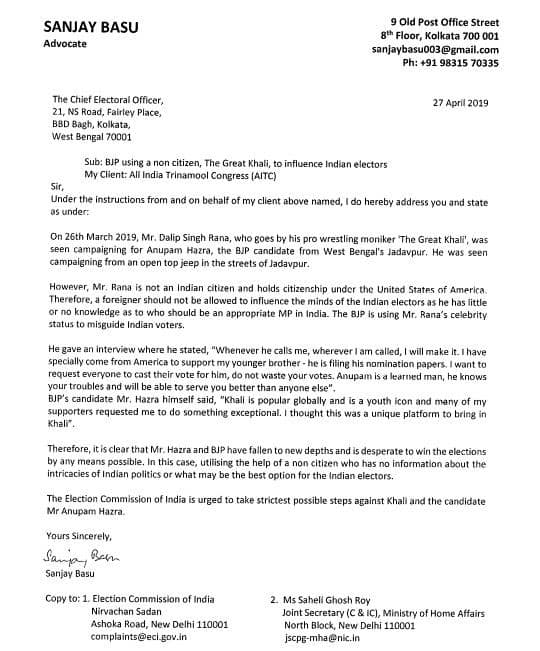 The allegation in the letter makes no mention of how foreign nationals were a part of campaigning of TMC's own candidates. Bangladeshi actor Ferdous Ahmed had joined Kanaia Lal Agarwal's rally in Raiganj while Ghazi Abdul Noor had been part of Saugata Roy's campaign in Dumdum. And while Khali was born and raised in India, and was also employed with Punjab Police before he gave professional wrestling a shot, the two Bangladeshi actors were found in violation of their visa provisions.

While BJP had blasted TMC for using Bangladeshi actors for their campaigning, the TMC's complaint against Anupam Hazra's campaign is being seen as a tit-for-tat move despite Khali's Indian origins.

The two political parties are in a bitter tussle for power in the ongoing Lok Sabha election 2019. There have been sporadic incidents of violence in the state of West Bengal in the first three of seven phases of voting with both BJP and TMC pointing the accusatory finger at each other.