Lok Sabha election 2019: Twitter saw more than 396 million tweets, a number which is nearly a 300 per cent rise from the Lok Sabha Election 2014.

In the run-up to the Lok Sabha election 2019, micro-blogging site Twitter hit a record of 396 million tweets on #LokSabhaElections2019. Out of this, a total of 3.2 million tweets were posted on Thursday, the results day itself. In a press release on Thursday, Twitter announced the volume of conversation around #LokSabhaElections2019 included tweets from candidates, political parties, citizens and the media from January 1, 2019, till May 23, 2019. Twitter saw more than 396 million tweets, a number which is nearly a 300 per cent rise from the Lok Sabha Election 2014.

On Thursday, the counting for the Lok Sabha election 2019 took place bringing the Bharatiya Janata Party (BJP) to the forefront with a bigger surge than 2014 and Narendra Modi as the Prime Minister for the second term. The PM tweeted with a congratulatory message that received hundreds of thousands of replies, retweets and likes in the span of a few minutes, making it the most retweeted tweet of the Lok Sabha election. Of the 3.2 million tweets on counting day, one-third of them being recorded between 3 pm and 4 pm, at the same hour when the PM tweeted.

PM Modi emerged as the most mentioned figure during the entire course of the Lok Sabha Election 2019, and the BJP4 Twitter handle along with the handles of their National Democratic Alliance (NDA) members took 53 per cent of the mentions on Twitter. The Congress handle along with handles of other members of the United Progressive Alliance (UPA) received 37 per cent of the mentions. 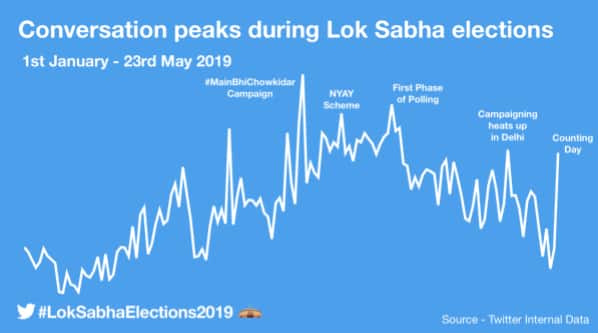 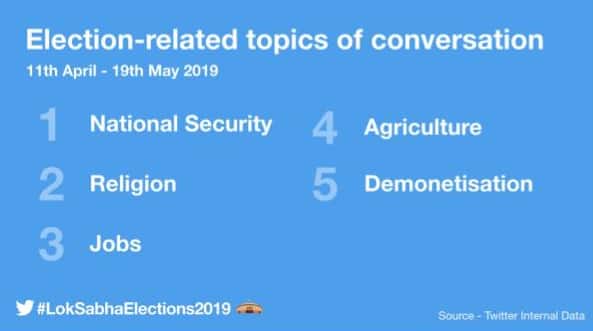 During the course of the six weeks of the election from April 11 till May 19, national security emerged as the most talked about election-related topic on Twitter, followed by religion, jobs and employment, agriculture, and finally demonetisation. 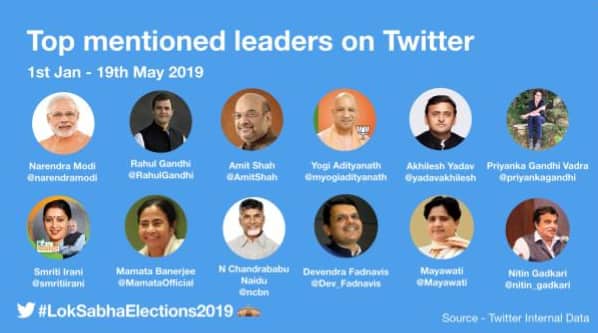 Despite being an Indian election, the impact of the Lok Sabha Election 2019 was felt worldwide. The conversations unfolded across the globe, with world leaders, celebrities and Indian diaspora engaging in dialogue about the new government. Throughout the campaign period, politicians and political parties used Twitter to communicate with Indian citizens in the country and across the world, while citizens took to the platform to address their queries directly to contesting leaders.