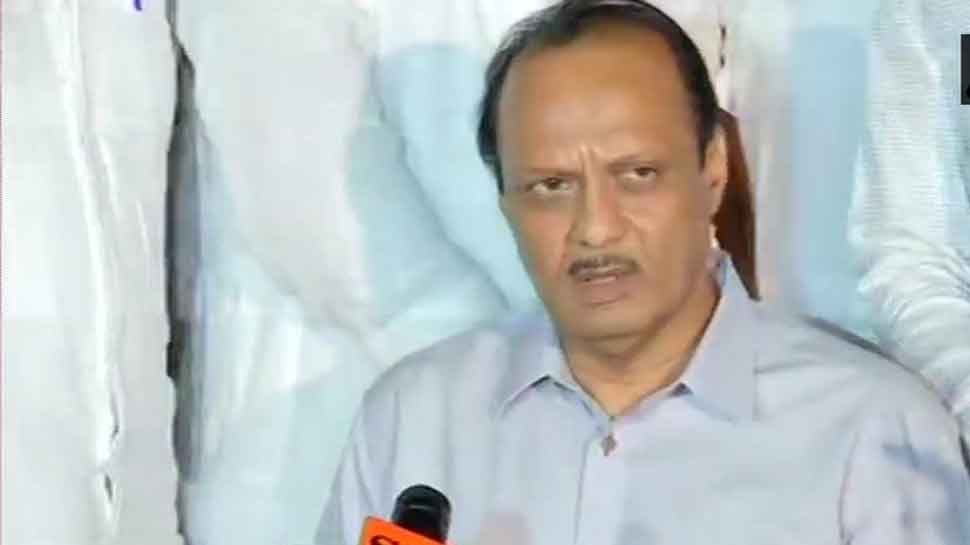 New Delhi: In a massive overnight twist, BJP leader Devendra Fadnavis took oath as Maharashtra Chief Minister for the second consecutive term and Nationalist Congress Party's (NCP) Ajit Pawar was sworn-in as his deputy. The oath ceremony was administered by Governor Bhagat Singh Koshyari at a function in the Raj Bhavan at around 8 am in the presence of a few BJP and NCP leaders, and other government officials.

Soon afterwards, Fadnavis said that the Governor would give them a letter instructing when to prove the new government`s majority on the floor of the Assembly. He also added that the cabinet would be expanded at a later date.

What's surprising was Ajit Pawar's decision to support BJP at a time when NCP, Congress and Shiv Sena had almost finalised a deal to form government in Maharashtra.

A lot is now happening in Maharashtra. Sharad Pawar has said that neither he nor does the NCP endorse his decision supporting BJP. Sena leader Sanjay Raut, meanwhile, said that Ajit has backstabbed the people of Maharashtra.

Tune in to Zee News for latest updates on Maharashtra government formation.

All NCP MLAs have been shifted to a hotel in Mumbai.

Bharatiya Janata Party is of the view that Ajit Pawar's appointment as NCP legislative party leader was valid and appointment of Jayant Patil in his place today is invalid, BJP leader Ashish Shelar says.

Speaking to media outside the Supreme Court, Congress spokesperson Randeep Surjewala says that the three parties are seeking an immediate floor test in the house, similar to the one ordered by Supreme Court in 2018 in Karnataka.

Congress leader Ashok Chavan says Devendra Fadnavis has misled the Governor and NCP has the numbers. Reiterating Nawab Malik's statement, Chavan says only 4-5 NCP MLAs are not in touch with the party.

In a press briefing, NCP MLA Nawab Malik said only 5 NCP MLAs are not in touch with the party.

"Five are not in touch with us. Six are on their way. The rest were there in the meeting. We are all confident that we will defeat this govt which has been formed chori chori chupke chupke. Till a new leader of Legislative party is chosen, all Constitutional rights of LLP are given to Jayant Patil. Our MLAs are here. Congress MLAs are here. Sena MLAs too are in Mumbai. We will defeat this govt while choosing the speaker itself," he said.

With the NCP meeting underway, the party's official Twitter account said, "In the meantime, all the constitutional rights of the leader of the NCP Legislature Party are with Mr Jayant Patil. The decision has been taken unanimously taken by the elected members of the party."

Senior Advocate Devadutt Kamat for Congress-NCP-Shiv Sena: In our petition, we requested SC for an urgent direction for a Floor Test to be held tomorrow itself. We are hopeful the Supreme Court will hear us. Our petition has been numbered.

Congress leader KC Venugopal on Maharashtra govt formation: Our 44 MLAs are intact. Maharashtra Governor has bypassed all norms and regulations. Without any verification, he invited BJP to form govt. We have moved Supreme Court. We will also raise this issue in the Parliament.

"Our people are there. Registry is open now. They will decide on the urgency of the case. Petition on behalf of three parties have been filed, SC Registry is processing it for further action,” senior advocate Devadutt Kamat for the three parties said.

The three parties are seeking an urgent hearing into the matter tonight only.

The Congress, NCP and Shiv Sena have filed a petition in the Supreme Court.

The petition has challenged the Governor's decision in which the Governor had invited Devendra Fadnavos to form the government in Maharashtra.

Ajit Pawar has been removed as the NCP legislative party leader in NCP meeting that took place today.

Dilip Walse Patil has been named as the new NCP legislative party leader.

According to officials, the governor invoked Rule 12 of its transaction of business to bypass the need of Union Cabinet's nod for revocation President's rule in Maharashtra.

In a dramatic turn of events, Shiv Sena-NCP-Congress have approached the SC against Governor of Maharashtra. They are waiting to file the writ petition in SC. The Congress leaders are expecting a hearing tonight.

Shiv Sena leaders Milind Narvekar and Eknath Shinde brought with them 2 NCP MLAs Sanjay Bansod and Babasaheb Patil at YB Chavan Center from the Mumbai airport. The two NCP MLAs are said to be with Deputy CM Ajit Pawar.

A writ petition has been submitted in the Supreme Court by NCP, Shiv Sena and Congress against Bhagat Singh Koshyari, the Governor of Maharashtra.

They are demanding that the governor's actions of Saturday morning should be declared illegal and Sena-NCP and Congress should be invited to form the government in Maharashtra.

Shiv Sena chief Uddhav Thackeray assures disgruntled MLAs that they will not let the BJP prove its majority on the floor of the House on November 30. He added that they should remain in Hotel Lalit for now and prepare to leave Mumbai anytime.

According to sources, Shiv Sena is planning to file a writ petition in Supreme Court.

I will not back out from my decision of supporting the BJP, tells Ajit Pawar to NCP.

This comes after several NCP leaders met Ajit at his residence to bring him back to the party.

All 56 MLAs of Shiv Sena attended the meeting with party chief Uddhav Thackeray at Hotel Lalit. After the meeting ended, some MLAs took the route towards the airport

Dhananjay Munde is believed to be the leader who rallied NCP MLAs into supporting BJP.

42 MLAs have reached the NCP meeting so far.

Only 30 MLAs are attending the crucial NCP meeting underway in Mumbai. Senior NCP leader Dhananjay Munde has also reached to attend the meeting.

Senior NCP leader and close confidant of Ajit Pawar, Hasan Mushrif, Sunil Tatkare and Dilip Vise Patil met Ajit at the Brighton building in Mumbai and spoke to him for around 1.5 hours.

According to reports, NCP is trying to mend bridges with Ajit Pawar.

Four out of nine rebel NCP MLAs have returned to Sharad Pawar claiming that they were misled by Ajit Pawar. Now Ajit Pawar has been left with only five MLAs namely Babasaheb Patil, Anil Patil, Narhari Jhirwal, Dhananjay Munde and Daulat Daroda, according to sources.

NCP meeting to take place shortly, party chief Sharad Pawar will be present too. According to sources, they can make a decision on Ajit Pawar's future in party.

"Modi hai to Mumkin hai (Anything is possible if Modi is there)," says CM Devendra Fadnavis while addressing BJP workers at the party office in Mumbai.

We will provide an honest and stable government in Maharashtra, says CM Fadnavis.

Addressing a press conference, Congress spokesperson Randeep Surjewala said that November 23 will be marked as a black day when the Constitution was crossed by a power-hungry BJP.

"They used an opportunistic Ajit Pawar and intimidated him with jail. If this is not a murder of democracy, then what is this? Last night pages of the Constitution were torn and a CM was administered the oath in the night," he said.

The details that are emerging from #Maharashtra are shocking n shows Governor acted in connivance with BJP n administered the oath of office to Devendra Fadnavis ji without verifying signatures of NCP MLAs. Governor must resign on moral ground. He has no right to remain in office

Senior NCP leader Dhananjay Munde will be taking the rebel NCP MLAs to Delhi with him.

All rebel NCP MLAs who supported Ajit Pawar to form the government with the BJP in the state will be shifted to Delhi.

42 out of 44 MLAs were present in Congress Legislature Party meeting where they expressed anger at senior leadership for delaying in forming the government.  Congress leader Mallikarjun Khadge was criticised by the MLAs.

Congress has decided to shift its MLAs to Madhya Pradesh's Bhopal by a 5 pm flight today.

We do not wish to make personal attacks and comments on Shiv Sena and its leaders. We will not do so. We were an alliance and we will not say anything personal against anyone. We waited for Shiv Sena... gave them enough time... they took 20-25 days: Prasad.

We are ashamed at the language used by the Shiv Sena for the Prime Minister and the Home Minister in their editorial mouthpiece Saamana. It is shameful and a new low for their party. We will not stoop to that level, says Prasad.

We will make no comments about their leaders. I say again; the people of Maharasthra have given the BJP both the mandate and the numbers. Both leaders took oath today with letters of support from their MLAs... that makes it legal. What is happening within the NCP, we cannot comment on. That is for the NCP to say. We will see what happens, says Prasad.

"What suddenly happened to the Shiv Sena after the result came out? They are the ones who went astray. We waited for them. But they snapped ties and went ahead... so if Ajit Pawar has come in support now, why is it such a problem for them. The real schemers were the ones who were forming an unholy alliance for personal gains," Prasad says.

"Some people are now talking about Chhatrapati Shivaji. Those who are stooping to whatever it takes, even give up on their ideals, give up their values just for personal gains have no moral ground to even quote Chhatrapati Shivaji Maharaj. We do not want to say anything further on this" says Ravi Shankar Prasad," he adds.

Information and Technology Minister Ravi Shankar Prasad says, "The mandate was for BJP. The numbers were with BJP... the people wanted Fadnavis as their chief minister. Where is the doubt? The mandate is clear of what the people want. In 2014 BJP contested 260 seats and won 46% of them. In 2019 we contested 150 seats and won 105. Which is better than the 2014 performance."

"The Shiv Sena candidates benefitted from the goodwill of the BJP and the leadership of Devendra Fadnavis ji. It has to be accepted and noted that people wanted Fadnavis as their chief minister again. The Congress and NCP themselves said that the mandate is for them to sit in the opposition. So how has this suddenly become a match-fixing to grab the chair?" Prasad adds.

Throughout the election campaign, Devendra Fadnavis' name was projected as the Maharashtra Chief Minister. The support base of BJP and the prospect of Devendra Fadnavis becoming CM has played a crucial role in the success of Shiv Sena candidates, BJP leader Ravi Shankar Prasad says.