Live: Uddhav Thackeray will now to take oath as CM on November 28 at Shivaji Park

Terming the Supreme Court's order for floor test in Maharashtra, as a slap on the BJP-Ajit Pawar alliance, the Congress spokesperson Randeep Singh Surjewala accused the two of "hijacking the mandate".

The Supreme Court on Tuesday (November 26) ordered the Maharashtra government to conduct a floor test to prove its majority in the House by 5 pm on Wednesday after considering the competing claims of the opposition parties. Hearing the parties, the apex court bench comprising Justices NV Ramana, Sanjeev Khanna, and Ashok Bhushan opined that since oath-taking of the MLAs had not taken place a floor test should be conducted as soon as possible on November 27.

The court said a pro-tem speaker would be appointed and the floor test would not be conducted by secret ballot and the proceedings would be telecast live.

Terming the Supreme Court`s order for floor test in Maharashtra, as a slap on the BJP-Ajit Pawar alliance, the Congress spokesperson Randeep Singh Surjewala accused the two of "hijacking the mandate". Surjewala tweeted, "Supreme Court`s decision is a slap on an illegitimate BJP-Ajit Pawar government, who had hijacked the `mandate`. Those who sought to avoid the `floor test` to rule by stealth and deception stand exposed."

Earlier, NCP replaced the nephew of Sharad Pawar as a legislature party leader with Jayant Patil. NCP chief Sharad Pawar has said that the decision of his nephew Ajit Pawar to align with BJP was against the party line and any MLA who aligns with him is likely to face anti-defection law.

On Monday, NCP legislative party leader Jayant Patil along with Shiv Sena leader Eknath Shinde, Congress leader Prithviraj Chavan and others visited Raj Bhawan and gave a letter showing the strength of 162 MLAs to the officials at Raj Bhavan. The BJP won 105 seats in the 288-member assembly followed by Shiv Sena 56, NCP 54 and Congress 44. 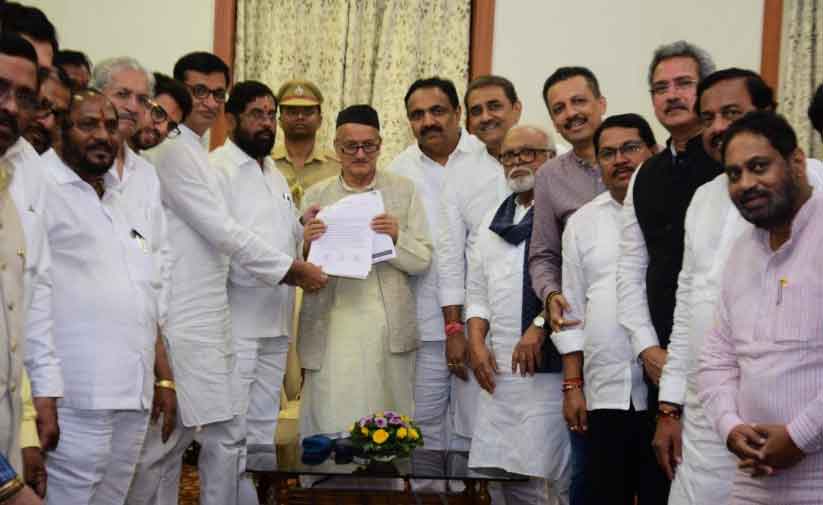 Swearing-in ceremony of Uddhav Thackeray has been preponed to November 28. He will be taking the oath at Shivaji Park at 5:30 pm.

NCP Sharad Pawar said, '' If Bala Saheb Thackeray would have been alive, he would be really happy,'' adding ''we criticised each other but it was never  personal.''

Shiv Sena chief Uddhav Thackeray after being elected as the 'Maha Vikas Aghadi' said, ''I accept the responsibility given by all of you. I'm not alone but you all are CM with me. What has happened today is the actual democracy. Together we will wipe off the tears of farmers in the state.''

Maha Vikas Aghadi leader and Shiv Sena chief Uddhav Thackeray, said, "I had never dreamed of leading the state. I would like to thank Sonia Gandhi and others. We are giving a new direction to the country by keeping faith in each other.''

Shiv Sena chief Uddhav Thackeray seeks blessings from Sharad Pawar after being elected as the leader of 'Maha Vikas Aghadi'. 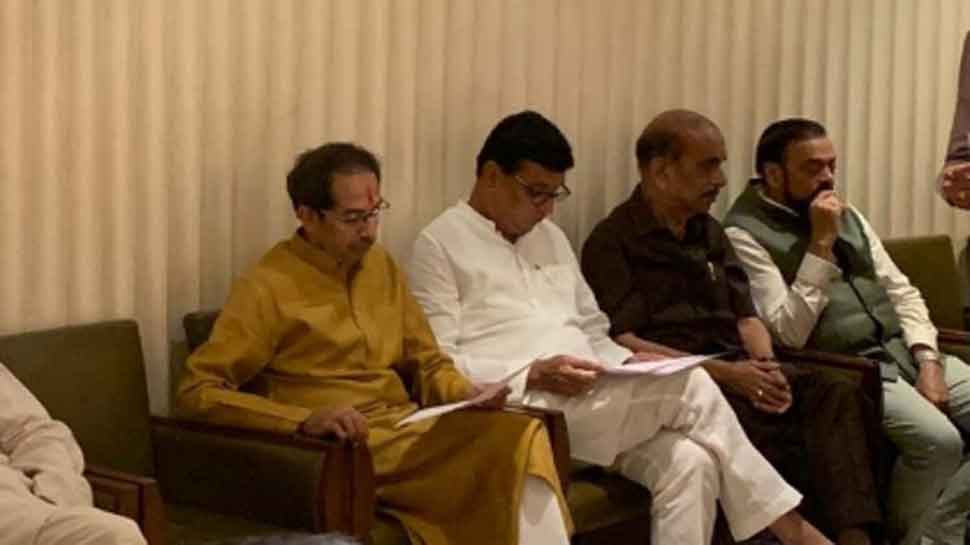 Aaditya Thackeray and Tejas Thackeray arrived at Trident Hotel to take part in the joint meeting of Shiv Sena, NCP, and Congress.

NCP leader Nawab Malik praised Shiv Sena's decision to join hands with Congress-NCP and said, "Shiv Sena was not born to do communal politics, they came into existence to serve the people of Maharashtra. Shiv Sena was spoiled after joining hand with BJP.'' 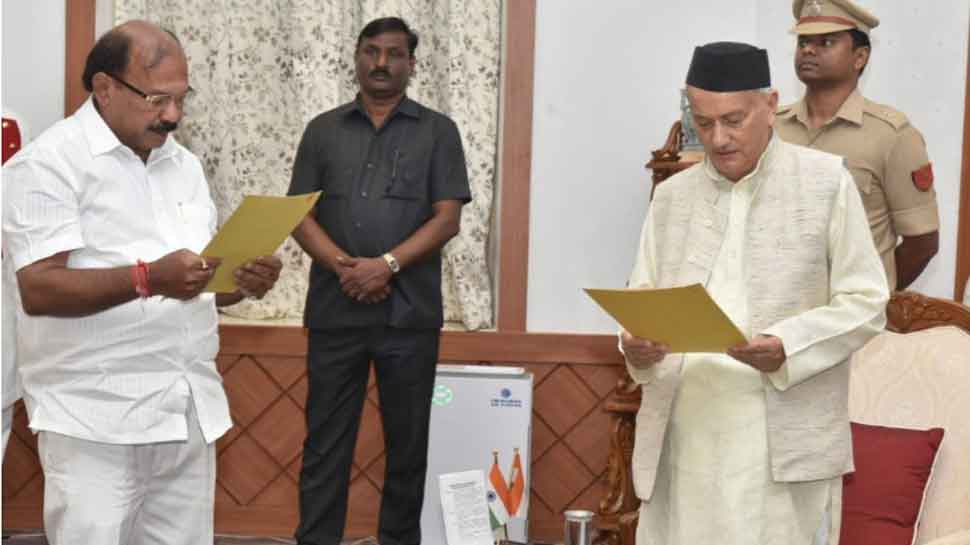 Congress President Sonia Gandhi has given her consent to the Common Minimum Program(CMP) of the three parties(Shiv Sena-NCP-Congress).  The CMP is likely to be released after the joint meeting today: Sources

Kalidas Kolambkar to be the pro-tem Speaker of Maharashtra Assembly. He will take oath in a short while at Raj Bhawan. Kalidas Colmber of BJP is an MLA from Wadala seat for eight consecutive terms.

Shiv Sena-Congress-NCP MLAs will seek majority on the floor of the House on November 28, till that time the MLAs will continue to stay in hotel. However, the Mumbai and Thane MLAs are now allowed to leave the hotel.

Shiv Sena-Congress-NCP to hold meeting at 7 pm, the three parties have also sought an appointment to meet governor tonight. 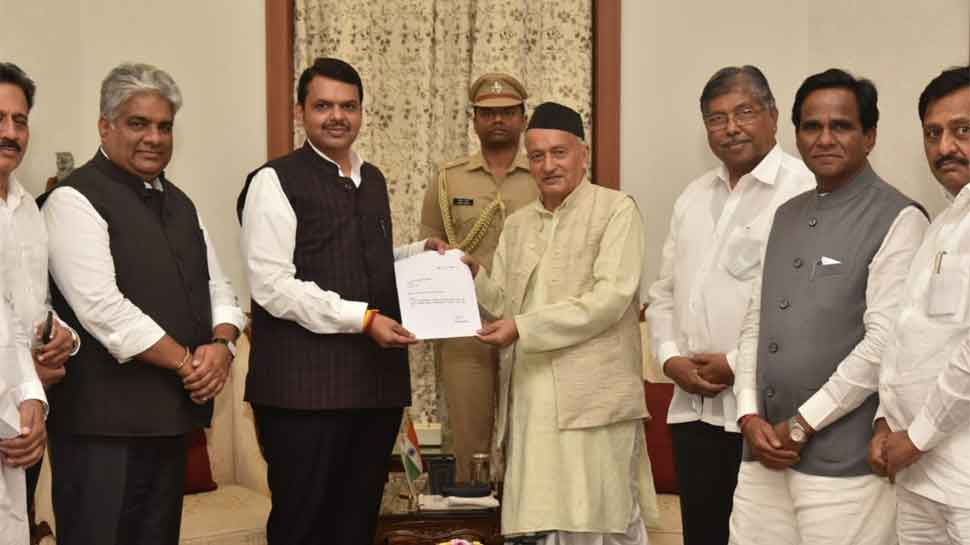 Congress leader KC Venugopal gave reaction after Devendra Fadnavis and Ajit Pawar filed resignation, said, ''This is a victory of constitutional democracy. They thought through horse trading they can make Government. This is not only a failure of Devendra Fadnavis but also a slap on faces of their masters sitting in Delhi.''

Congress leader KC Venugopal informed that Shiv Sena-Congress-NCP will hold a meeting followed by a joint press conference in the evening. The alliance will also elect the leader of joint legislative party in the meeting.

According to sources, Shiv Sena chief Uddhav Thackeray will be the Chief Minister of Maharashtra and Congress leader Balasaheb Thorat will take charge as the Deputy Chief Minister.

Devendra Fadnavis slam Shiv Sena in his press conference said, "People who never stepped outside Matoshree(Thackeray residence) were going door to door to make government with NCP and Congress."

Devendra Fadnavis to go to Raj Bhavan and tender resignation after the press conference.

Devendra Fadnavis said, ''BJP will work as an effective opposition and try to raise the voice of people in the House.''

Devendra Fadnavis mocks the NCP-Congress-Shiv Sena alliance in his press conference, saying the three-wheeled government will not last long.

In reaction to the latest developments over the government formation in Maharashtra, Senior Congress leader Ahmed Patel tweets as:

Devendra Fadnavis said, ''Shiv Sena started bargaining for the CM post from day one after the election results were declared.''

Devendra Fadnavis said, "The hunger for power is such that Shiv Sena leaders are even willing to ally with Sonia Gandhi.''

Devendra Fadnavis said in his press conference, '' Will submit resignation to the governor, as we don't have the majority.''

Devendra Fadnavis said, ''we formed government to respect the mandate''. He added, " Shiv Sena has made a laughing stock of itself.''

Devendra Fadnavis in his press conference said, ''There was no talk with the Shiv Sena to have a rotational CM for two and a half years each.''

BJP-Shiv Sena alliance got absolute majority in Maharashtra election says, Devendra Fadnavis. He added that the BJP was the single largest party.

Sanjay Raut says Uddhav Thackeray will Maharashtra CM for the next 5 years.

NCP-Congress-Shiv Sena meeting delayed by 1 hour, to take place at 6 pm instead of 5 pm in Mumbai's Trident Hotel.

We respect Supreme Court's order of carrying out a floor test on Wednesday. NDA doesn't have the majority yet, I am sure we will get it by tomorrow as we trust Ajit Pawar that he will bring his MLAs: Union Minister Ramdas Athawale

I hope the Governor will listen to us and make Balasaheb Thorat, the senior-most member of the House, the Pro-Tem Speaker. It's you from whom I have come to know about the resignation of Ajit Pawar. I don't know about it, I would like to make a comment on it only after getting to know everything about it, says NCP's Jayant Patil.

BJP general secretary Ram Madhav said that Chief Minister Devendra Fadnavis led government in Maharashtra will prove its majority in the house."The majority has to be proven not in hotels or elsewhere but on the floor of the House. We are confident that on the floor of the house our government will be able to prove its majority," Madhav told reporters.

Shiv Sena-Congress-NCP MLAs will have a joint meeting at 5 pm today in Hotel Trident. In this meeting, the MLAs of the three parties of Shiv Sena-Congress NCP will together choose their leader. Sena chief Uddhav Thackeray is likely to be the leader.

NCP, Shiv Sena and Congress MLAs to elect the leader of their alliance at 5 pm today.

All BJP MLAs to attend a meet in Mumbai on Tuesday at 9 pm at Garware Club. All the MLAs were asked to leave for Mumbai.

Sanjay Raut, Shiv Sena on Maharashtra floor test on Wednesday: Truth has won. The court has given 30 hours, we can prove majority in 30 minutes.

Tomorrow, at 11 am, members to take an oath and at 5 pm Pro-tem Speaker to hold Floor Test in Maharashtra Assembly. All 3 parties (Congress-NCP-Shiv Sena) are satisfied with the Supreme Court order. Devendra Fadnavis should resign today: Congress' Prithviraj Chavan.

NCP's Nawab Malik on SC order of Maharashtra floor test said, "Today's verdict of the SC is a milestone in Indian democracy. Before 5 pm tomorrow, it will be clear that BJP's game is over. In a few days, there will a govt of Shiv Sena-NCP-Congress in Maharashtra."

As per the process at first Governor Bhagat Singh Koshiyari will administer an oath to the pro-tem speaker. The pro-tem speaker will then administer an oath to the rest 287 MLAs. This will be followed by a one-line whip about the floor test and then the voting will take place. There will be no secret ballot and the entire process has to be completed before November 27, 5 pm. The entire proceeding will be telecast live.

The proceedings will be live telecast. The Protem Speaker will be appointed and the only agenda is to conduct the floor test: SC

A room has been booked on the fourth floor of Hotel Trident, via a Pune corporator, where Ajit Pawar is also present.

It is the murder of democracy. Maharashtra Governor murdered democracy. An attempt is being made for horse-trading but it will not work on our MLAs. Why is the Devendra Fadnavis-led majority government trying to run away, asks Shiv Sena's Sanjay Raut

Rajendra Bhagwat, Maharashtra Legislature Secretary: Legislature Secretariat has received a letter claiming that Jayant Patil is the Legislative Party Leader for NCP. But, decision has to be taken by the Speaker. As of today, it has not been decided.

Shiv Sena-NCP-Congress alliance move the Supreme Court for a direction to restrain the Devendra Fadnavis government from taking important policy decisions. The petitioners want to highlight the reports alleging the closure of nine cases in the Rs 70,000 crore irrigation scam against Ajit Pawar.

BJP core committee meeting on Tuesday to discuss political developments after the Supreme Court's verdict. CM Fadanvis and BJP leaders to sit at 11 am at Varsha bungalow in Mumbai. 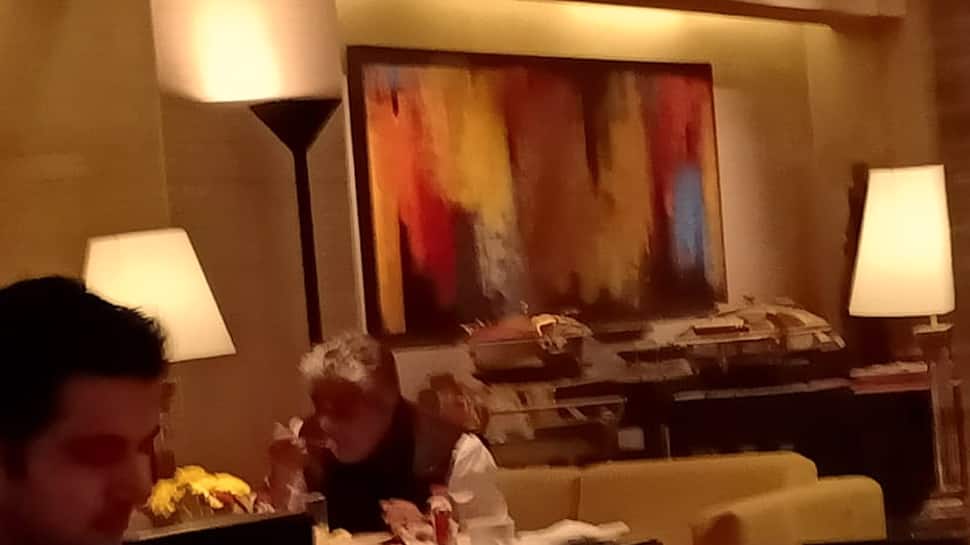 Rebel NCP leader and Maharashtra Deputy Chief Minister Ajit Pawar on Tuesday morning visited Mumbai's Trident Hotel where BJP Maharashtra in-charge Bhupendra Yadav was seen having breakfast. However, there is no update on whether there has been a meeting between the two.

The Supreme Court (SC) will pronounce its order on a joint petition filed by Shiv Sena, Congress and NCP against the decision of Governor Bhagat Singh Koshyari to invite the BJP to form government in the state. The apex court is expected to give its verdict at 10.30 am.

The Shiv Sena on Tuesday slammed NCP supremo Sharad Pawar's nephew Ajit Pawar for riding on his uncle's hard work to make a name for himself in politics. In an editorial in party mouthpiece Saamana, Shiv Sena challenged Ajit Pawar to start his own party and show the world that he has the guts to become a political leader on his own.