As per reports, NCP's Sharad Pawar had put forward the condition that his party would support Shiv Sena in government formation only if it severe all ties with the BJP.

New Delhi: In a major turn of events in Maharashtra, Union Minister of Heavy Industries and Public Enterprises and Shiv Sena MP Arvind Sawant stepped down from the central Cabinet amid the tussle between his party and BJP over the government formation.

Taking to Twitter, Sawant announced his decision to quit the Union Ministry. "Why stay in Delhi government in such a false environment?" he wrote. Sawant's tweets, which are in Marathi, says, 'I am quitting the Union Cabinet as the BJP betrayed the Shiv Sena in Maharashtra and lied about the 50:50 power-sharing formula. The BJP went back on its word on the agreement that was finalised between the two parties. Denying this formula is a formidable threat for Shiv Sena. Shiv Sena only sides with the truth. Why stay in Delhi in this environment of falsehood?" 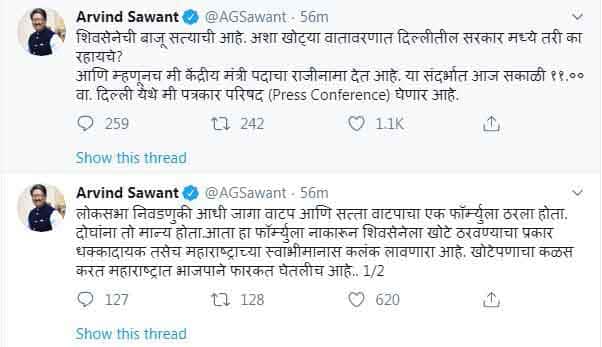 Sawant will address a media conference at 11 am in the national capital today.

Sawant was given the ministry barely six months before when NDA 2 came to power with a massive haul of 352 seats in the Lok Sabha elections.

As per indications, Shiv Sena chief Uddhav Thackeray is all set to stake claim to the government in Maharashtra with the support of Nationalist Congress Party (55 MLAs), and outside support of Congress (44). BJP on Sunday admitted that it lacks the required number to form the government in the state and conveyed the same to Governor Bhagat Singh Koshyari, following which, Shiv Sena, the second-largest party in the state, was invited to indicate the 'willingness and ability' to form the government.

Both the NCP and the Congress have made it adequately clear that their support would depend on the Sena categorically announcing that its alliance with the BJP has broken and then withdraws its sole nominee in the Union Cabinet, Heavy Industry Minister Arvind Sawant.

Meanwhile, in the wake of the Governor`s invite, a fresh round of informal negotiations had started between the Sena-NCP-Congress on Sunday evening.

The BJP-Shiv Sena alliance had received an absolute majority in Maharashtra after the BJP won 105 and Shiv Sena bagged 56 seats in the 288-member Maharashtra Assembly.

However, the state was caught in an impasse after the saffron allies got locked in a bitter tussle over the chief minister's post. The Shiv Sena's demand to share the post of chief minister for half the term under the 50:50 formula was turned down by BJP. On November 8, Fadnavis submitted his resignation to the Governor, claiming that despite several attempts being made by BJP to reach out to Shiv Sena for talks, no response came from Uddhav.