The Brihanmumbai Municipal Corporation also issued an alert warning of heavy rainfall throughout the day in Mumbai. 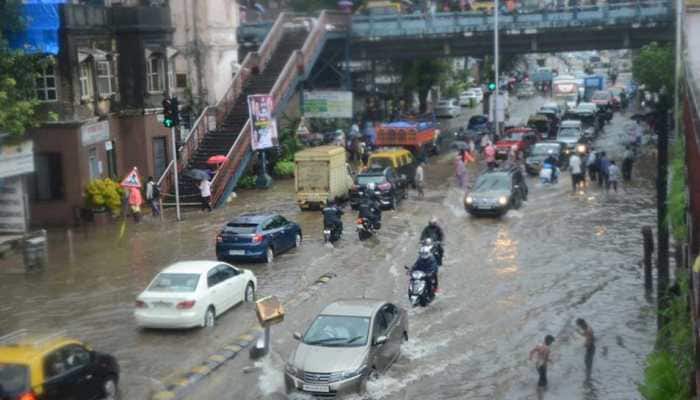 Heavy rains lashed several parts of Mumbai on Friday morning after a long dry spell. The rains led to major traffic snarls in different areas of Mumbai and its suburbs, and also reportedly hit flight operations at the airport. Several trains were also reported to be running late.

The rain caused heavy traffic jams along the Western Express Highway in the Maharashtra capital, reported news agency ANI. There were also reports of waterlogging in Juhu, Vasai and other areas. Heavy traffic jams were reported on Jogeshwari Vikhroli Link Road from Jogeshwari highway to IIT Powai, from Borivli to Santacruz. Traffic was also diverted on SV Road near National College in Bandra.

Routes of several BEST buses were diverted due to waterlogged roads at Makhmali Talao Thane, Sion and Hindmata Cinema Dadar.

In Vashi area of Navi Mumbai, the rain started at around 9 am, leading to waterlogged roads. As Vashi is a low-lying area, it often faces waterlogging issues during rains.

The Brihanmumbai Municipal Corporation also issued an alert on its official handle on microblogging site Twitter warning of heavy rainfall throughout the day in Mumbai city and suburban areas. The BMC shared a warning by the Indian Meteorological Department (IMD), which read, “Loud peals of thunder with frequent lightning flashes, moderate to heavy spell of rain and maximum wind speed 29 to 74 kmph – in gusts.”

The IMD also warned of “intense spell of rainfall” in Greater Mumbai and adjoining areas of Thane and Palghar on Friday.

According to Accuweather, rains and thunderstorms are likely to continue in Mumbai on Friday as well as Saturday.

On Thursday, the BMC had cautioned Mumbaikars against opening manholes. An open manhole had led to the death of a Mumbai-based doctor during rains in 2017. Dr Deepak Amarapurkar, a well-known gastroenterologist, had died after falling into an open manhole while walking down a flooded street in south Mumbai during the torrential rain on August 29, 2017.

An advisory released by the BMC on Thursday said, "The BMC has fixed protective grills in flooding-prone areas per Bombay High Court directives....Banners are also displayed at various flooding locations to appeal the citizens not to open manholes and inform BMC office if any manhole cover is found missing."