Congress leader Sanjay Jha on Monday issued an `uncoonditional apology` to Subramanian Swamy for calling him a `CIA agent` following a Wikileaks expose which claimed that the Bharatiya Janata Party leader had informed a US department officer about Indira Gandhi`s failing health in 1977. 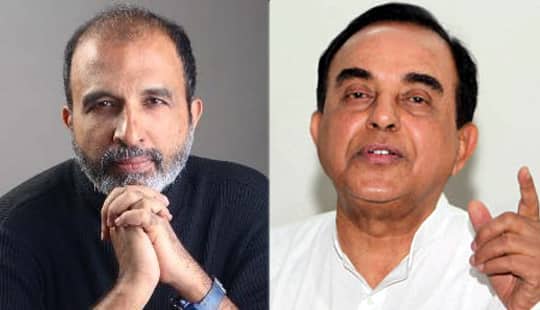 
New Delhi: Congress leader Sanjay Jha on Monday issued an `unconditional apology` to Subramanian Swamy for calling him a `CIA agent` following a Wikileaks expose which claimed that the Bharatiya Janata Party leader had informed a US department officer about Indira Gandhi`s failing health in 1977.

Swamy confirmed this on Twitter and wrote, "My legal eagles Supriya Manan, Ishkaran Bhandari and my wife Dr. Roxna Swamy inform me that Sanjay Jha has sent an email letter."


This letter turned out to be an apology from Sanjay Jha which Swamy later retweeted.


In the apology, Jha said that the tweet by him was "nothing more than a spontaneous enquiry" on the despatch authored by a US Department of State diplomat, which was leaked out in Wikileaks.


"Therefore solely to invite discussions in social media to seek perspectives and in good faith, the undersigned had submitted an opinion based this published Wikileaks item. Hence it was never the intention of the undersigned to malign Dr Swamy, to sully his reputation at all or to defame him," he said in the statement.


Jha noted that the Wikileaks has itself denied any such imputation by it and therefore the source of the said leak does not confirm or even suggest that Swamy is a CIA agent.


Maintaining that he had "misread and misunderstood" the Wikileaks disclosure, Jha said he tenders an "unconditional apology" for publishing the impugned tweet" and promised to delete that.


"I, therefore, regret any disrepute or pain caused to Dr Swamy, since that was never my intention and especially so as I hold Dr Swamy in high esteem," he said in the statement.

The email from Mr. Jha contains a scan of his signed statement of unconditional apology for alleging that I am a CIA agent. Will tweet it

In April this year, the global whistleblower organisation had released an electronic telegram sent in 1977 that contained classified information revealed to the Department of State (USA) by Swamy regarding the then Congress party president Indira Gandhi.

Following this expose, Jha had reportedly called Swamy a `CIA agent` and tweeted, "BREAKING NOW: So confirmed by Wikileaks what has often been suspected so far; BJP`s@Swamy39 is a CIA agent. http://t.co/SdvNwihDre (sic)” (This tweet now stands deleted).

This had led to a war of words between Jha and Swamy, with tweets flying thick and fast from the BJP leader`s handle.


The BJP leader then sued him for Rs 3 crores after the tweet was published on April 25 this year.Jha was served a legal notice on May 12.

I have checked with Wikileaks . There is no reference of any CIA briefing by me of any official secrets. So I am filing a defamation case.

Sanjay Jha has proved himself to be a despicable rascal and dirty liar. Ask him to quote the exact passage . Otherwise in Court he has to.

The hullabaloo was over a tweet by Wikileaks that read, "Subramanian Swamy gave US political inteligence on Indira Gandhi`s election strategy, health."

The full text of WikiLeaks report:


Several reports suggesting the prime minister may be in ill health have come to the department`s attention in recent days. It has been reported Jagjivan Ram wished her speedy recovery in his letter of resignation. An AFP report from Delhi February 2 cites an informed Indian source to effect she is in poor health. However those close to her are also reported by AFP as explaining that she is slightly indisposed. A further report from Delhi indicates she looked tired and drawn in responding to Jagjivan Ram`s announcement. Subramanian Swamy suggested to department officer ten days ago that he heard Mrs. Gandhi was prompted to set the March election date because she wanted to square things away in view of her failing health. Newsweek has a story she has terminal cancer and the surprise election call was a way to assure the quick succession of Sanjay in the next 60-90 days.

Bus, mini-bus strike called in Kolkata for 3 days from June 25