Ashwini and Satwik needed just 20 minutes to brush past the Guernsey duo 21-9, 21-5 in straight games. 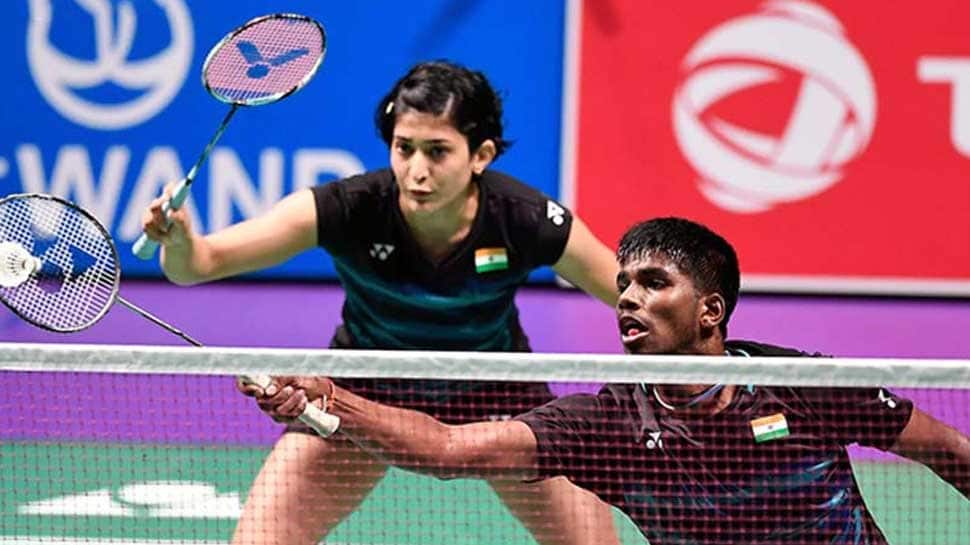 Gold Coast: The Indian mixed doubles duo of Ashwini Ponnappa and Satwiksairaj Rankireddy thrashed Guernsey's Stuart Hardy and Chloe Le Tissier 2-0 to advance to the round of 32 at the 21st Commonwealth Games in Australia's Gold Coast on Tuesday.

High on confidence after clinching the gold in the mixed team event here on Monday, Ashwini and Satwik needed just 20 minutes to brush past the Guernsey duo 21-9, 21-5 in straight games.

India in other events on Day 6

Amit has now ensured a medal for India as those in the last fourth stage are assured of a place on the podium.

Indian para-swimmer Vaishnavi Vinod Jagtap managed to enter the final of women's S8 50-meter Freestyle category at the 21st Commonwealth Games here on Tuesday. Vaishnavi clocked a timing of 41.63 seconds to finish sixth out of seven swimmers in Heat 1 at the Optus Aquatic Centre here.

The Indian was 10.22 seconds adrift of Australia's Lakeisha Patterson, who topped the Heat, registering 31.41 seconds.

In shooting events, Indian shooters Chain Singh and Gagan Narang failed to ensure any medals in the men's 50m Rifle Prone event at the 21st Commonwealth Games 2018 in Australia's Gold Coast on Tuesday. Chain finished fourth with a score of 204.8 points in the final round. Gagan was second from bottom in the eight-man final with 142.3.

David Phelps of Wales won the gold medal with a new CWG record of 248.8. Neil Stirton of Scotland took silver with 247.7 while England's Kenneth Parr got the bronze with 226.6. Earlier, Gagan finished the qualifying round in the third position with 617 points.

Chain was in sixth place, having scored a total of 614.2. James Daly of Australia topped the standings in the qualification stage with 620.5 points. Ryan Taylor of New Zealand was second with 619.4.

Meanwhile, in the women's category, shooters Annu Singh and Heena Sidhu entered the final of the women's 25-meter Pistol event here on Tuesday. Annu finished the qualification stage at the second spot with a total of 584 points. Heena was third with 579. Xiu Hong Teh of Singapore topped the standings with 584.

Xiu, who was second after the Precision round with 291, registered 96, 100 and 97 in the Rapid stage to snatch the lead. Heena meanwhile, started slowly before climbing up the standings with an awesome show in the Rapid round.

India on Tuesday defeated Malaysia 2-1 in a Pool B match of the men's hockey tournament at the 21st Commonwealth Games (CWG) here on Tuesday. Harmanpreet Singh (3rd, 43rd minutes) converted a couple of penalty corner while the experienced Faizal Saari reduced the deficit for Malaysia.

India's Dipika Pallikal and Joshna Chinappa came from behind to beat Pakistan's Zafar Faiza and Zafar Madina 2-1 in squash women's doubles Pool C match at the 21st Commonwealth Games here on Tuesday. After going down closely 10-11 in the opening game that lasted for nine minutes, the Indian duo bounced back strongly to thrash the Pakistani pair 11-0 in just four minutes.

Dipika and Joshna then sealed their victory after another 11-1 win in the third game, that lasted for mere five minutes at the Oxenford Studios here. The Indians will next take on Wales' duo of Tesni Evans and Deon Saffery on Wednesday.