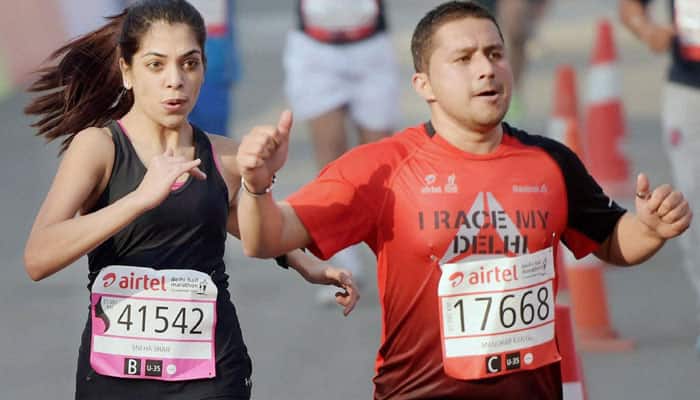 Srinu put up a scintillating performance at the marathon with a timing of 1:04:33.

"I am feeling good but it wasn`t my best. Next on my cards is 42km race in Mumbai which is also an Olympic qualifier," Srinu told ANI.

Suresh Patel clinched sliver after finishing the race in 1:04:57 and half marathon debutant Harshad Mhatre (1:05:12) won the bronze medal in the Indian elite men`s category.

"I started off late as I thought it would be easy to cover the last 10km, but it wasn`t," Patel told reporters.

Debutant Harshad Mhatre was running alongside Srinu for most of the half marathon but then decided to stay behind in the latter stage of the race.

"I realised that in the last two-three years, I have been training as a marathon runner, but for shorter distances. I ran 15-16 km with Srinu and he told me that time that we could break the course record. But then I decided to stay behind and conserve energy since it was my first half marathon," Harshad told reporters

"I had a great time running this year`s half marathon in Delhi. I ran along with Parul for most of the race, it was great that we paced each other in this half marathon," she added.

Chinta Yadav improved her timing by a whopping six minutes as compared to her performance in the previous Airtel Delhi Half Marathon.

Celebrating its 15th year in the city, the Airtel Delhi Half Marathon was flagged off on Sunday from Jawaharlal Nehru Stadium by Union Minister for Youth Affairs and Sports Kiren Rijiju.