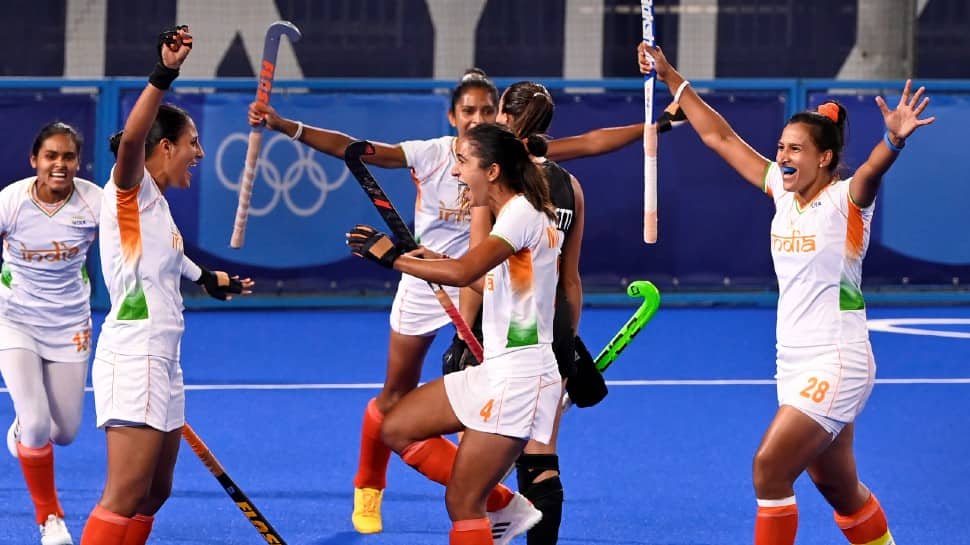 It was a heartbreak for heroic Indian women hockey team as they lost their bronze medal match 4-3 to Great Britain at the Tokyo Olympics on Friday (August 6). Rani Rampal's girls were in tears as they failed to win their first-ever Olympic medal by a whisker.

Great Britain's Grace Baldon struck a crucial blow in the 48th minute of the match against India. With a little over 12 minutes left in the tie, Great Britain were up 4-3 in spite of a heroic fight back by the Indian women hockey team. India were a player down for 5 minutes with Udita off the field due to a yellow card in the fourth quarter.

Brilliant goalkeeping by India's Savita Punia kept her side in hunt for a historic first medal in the bronze medal match against Great Britain at the Tokyo Olympics on Friday (August 5). Punia kept waves of British attacks at bay in the third quarter to keep the match level at 3-3 with just 15 minutes remaining now in the match.

Great Britain captain Hollie Pearne-Webb struck for her side in the 35th minute of the game to level the game at 3-3. India again got close minutes later with their eighth penalty corner, with Gurjit Kaur just missing her hat-trick in the third quarter.

Indian women hockey team made an amazing comeback in the second quarter with Vandana Katariya adding a third goal for the side to put them 3-2 in front against Great Britain. Katariya's 29th minute strike was coupled with twin goals by Gurjit Kaur, just minutes earlier.

Sensational double strike by India's Gurjit Kaur levelled the game at 2-2 in the second quarter of . Gurjit's fourth goal of the Tokyo Olympics and twin strikes in 25th and 26th minute brought Indian women hockey team storming back into the game, keeping dream of a first-ever medal alive.

Great Britain's Sarah Robertson unleashed a powerful tomahawk in the 24th minute to put her side 2-0 in front in the second quarter. Indian side were already a player down with Nisha off the field.

What an inspiring first half this has been!

Indian women hockey team's Lalremsiami earned the best shot of equalising the bronze medal match against Great Britain at Tokyo Olympics on Friday (August 5). Just five minutes into the second quarter and down 0-1 in the game, Lalremsiami unleashed a powerful reverse tomahawk but was denied by Great Britain goalkeeper Madeline Claire Hinch kept her at bay. But Lalremsiami went on to earn the first penalty corner for the Indian team a minute later, but a variation went in vain.

Great Britain's Elena Rayer gave her side much needed lead, just a minute into the second quarter of their bronze medal match against India women hockey team at Tokyo Olympics on Friday (August 5). The ball took a deflection from a India defender's stick before finding the back of the net.

India women hockey team goalkeeper Savita Punia stood like a rock in front of the net in the first quarter. The Great Britain side had majority of circle penetrations in the initial part of the match -- 6 to India's 1 -- as the score remained at 0-0 although the British side had three initial penalty corners.

The defence of Indian women hockey team has stood firm early. Great Britain had an early penalty corner but India managed to keep it out to ensure that score remains at 0-0 in the first quarter.

They have already surpassed all expectations and the Indian women’s hockey team will now look to go a little further and notch up its maiden podium finish at the Olympics when it takes on Great Britain in the bronze medal play-off on Friday (August 6). The men’s team rewrote history on Thursday as it claimed an Olympic medal after 41 years, defeating Germany 5-4 to win the bronze in an edge-of-the-seat play-off match.

And having already recorded their best-ever Olympic performance, the Indian women would look to double the nation's joy on Friday. But it would be easier said than done for the Indians as they were thrashed 1-4 by Great Britain, who were the defending champions, in the pool stages.