The most happening couples of B-town Kareena Kapoor, Saif Ali Khan and Malaika Arora-Arjun Kapoor were snapped at a friend's residence on Saturday night in Mumbai.

New Delhi: The most happening couples of B-town Kareena Kapoor, Saif Ali Khan and Malaika Arora-Arjun Kapoor were snapped at a friend's residence on Saturday night in Mumbai.

Arjun joined his rumored girlfriend Malaika for the party after attending an event. Malaika looked stunning in a silver high-slit dress while Arjun kept it casual in a blue T-shirt. Kareena, on the other hand, donned a printed jumpsuit and Saif opted for a black t-shirt. Check out the pictures: 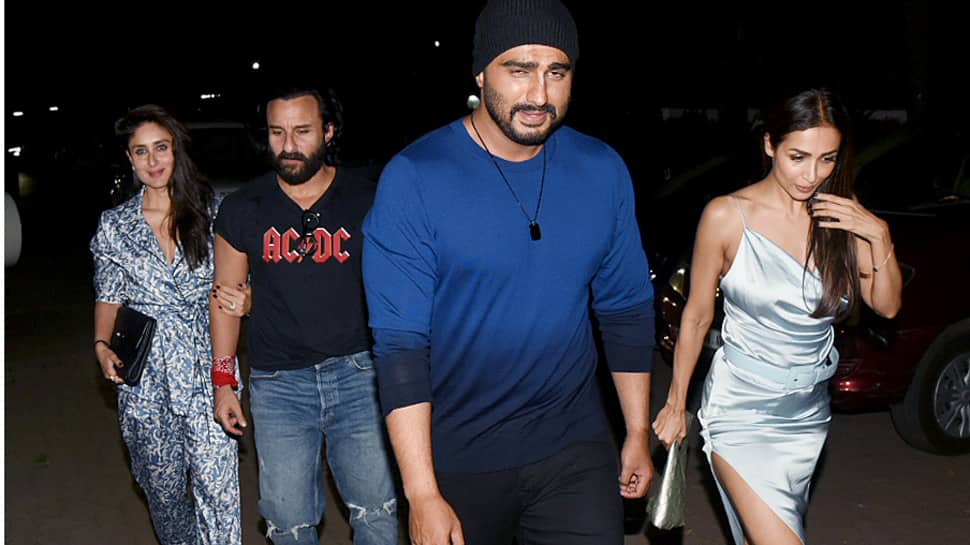 Kareena Kapoor and Malaika share a great rapport and are often spotted partying together. Malaika's younger sister Amrita and Bebo are the famous BFF of the tinsel town.

Arjun, on the other hand, had shared screen space with Kareena in Ki and Ka. Their chemistry in the film was loved by all and it did a fair job at the box office.

Earlier in the month, putting an end to marriage rumors with Malaika, Arjun told PTI, "I am not getting married. If I am getting married I will speak about it openly. There is no reason for me to hide it. It is not something I can hide from people. If I am not hiding anything now, why will I hide my marriage?  "I am working now, I am not in the zone to get married. I don't care about what the world has to say. I think jumping the gun is silly."

On the work front, Arjun will next be seen in 'India's Most Wanted'. The film's trailer was unveiled recently and has added to the excitement around the film.

The thriller is helmed by Raj Kumar Gupta who also directed 'No One Killed Jessica'. It is slated to release on May 24.