In one of the pictures, Priyanka Chopra and Nick Jonas pose with their three dogs- Diana, Gino and Panda. In the caption, Priyanka talked about the growing Chopra Jonas family. She also included pictures from her reception and wedding ceremony. 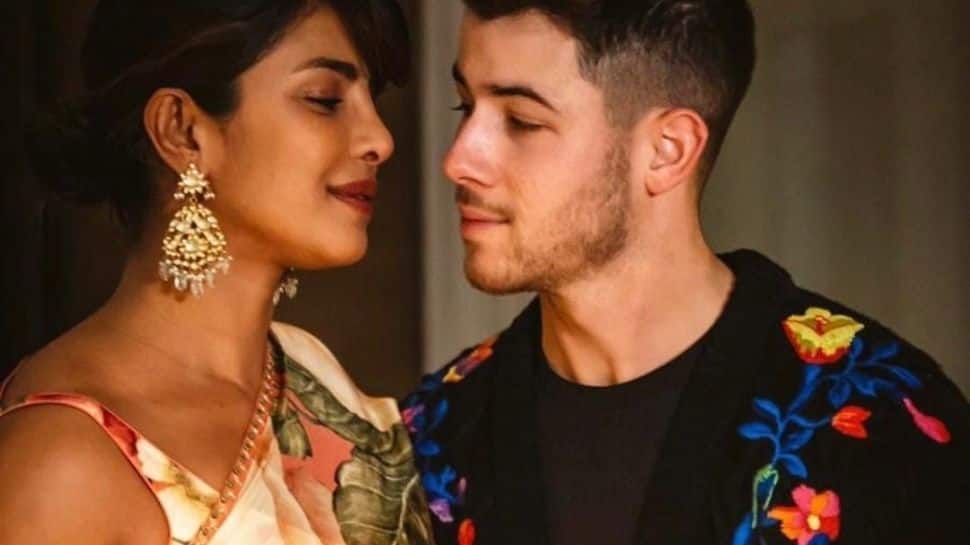 New Delhi: Actress Priyanka Chopra has shared some unseen pictures from significant moments of her life in her recently released memoir ‘Unfinished’. The book which hit the stands on Tuesday (February 9), has been the talk of the town since.

A fan account of Priyanka’s husband and American singer-actor Nick Jonas shared some rare pictures from the actress’ book. In one snap, Priyanka and Nick can be seen in the 'magical island of Crete' which was taken just after their engagement.

Priyanka also shared an unseen picture from her ‘griha pravesh' ceremony, for which Desi Girl chose a white kurta and paired it with an orange dupatta.

In one of the pictures, the couple pose with their three dogs- Diana, Gino and Panda. In the caption, Priyanka talked about the growing Chopra Jonas family. She also included pictures from her reception and wedding ceremony.

Some pics of Nick and Priyanka from her new book! pic.twitter.com/QzukPkW1MC

Priyanka and Nick tied the knot at Umaid Bhawan Palace in Jodhpur on December 2, 2018 in a grand celebration.

In ‘Unfinished’, ‘The White Tiger’ actress opened up about her initial struggles in the film industry. Sharing one such incident, Priyanka revealed how she was asked to get her 'proportions fixed' by a filmmaker.

“After a few minutes of small talk, the director/producer told me to stand up and twirl for him. I did. He stared at me long and hard, assessing me, and then suggested that I get a boob job, fix my jaw, and add a little more cushioning to my butt," The Independent quoted her memoir.

"If I wanted to be an actress, he said, I’d need to have my proportions ‘fixed’, and he knew a great doctor in LA he could send me to. My then-manager voiced his agreement with the assessment", she added in her book.

On the work front, Priyanka was last seen in Netflix’s ‘The White Tiger’, along with Adarsh Gourav and Rajkummar Rao.