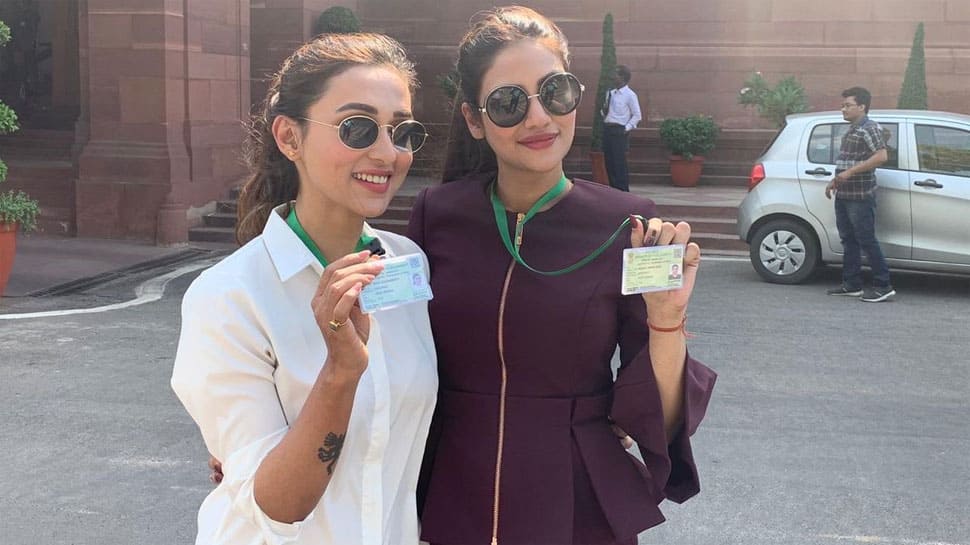 New Delhi: The first time Trinamool Congress (TMC) MPs Nusrat Jahan and Mimi Chakraborty stirred up a controversy after posting pictures of their first day at the Parliament. The actresses turned politicians got massively trolled for dressing up in a glamourous look as netizens found it 'inappropriate'.

Some called out saying 'this is not film shooting' to others saying that 'this is not the place for a photoshoot'.

A new beginning..!! I thank @mamataofficial and people of my Basirhat constituency to have belief in me..

Remember your dreams and fight for them #gratitude #Obliged

And its us again
1st day at Parliament @nusratchirps pic.twitter.com/ohBalZTJCV

With so much drama already happening, we thought of finding out some of their best on-screen works so far.

The model-turned Bengali movie star made her Tollywood debut with 'Shotru' in 2011. She then went on to star in  Khoka 420 in 2013. The same year she was seen in Khiladi, opposite Ankush Hazra. She featured in two item numbers—Chicken Tandoori and Desi Chhori which turned to be blockbuster dance songs that year. The actress featured in several hits such as Jamai 420, Har Har Byomkesh, Kelor Kirti, Love Express, Zulfiqar, Haripada Bandwala, Bolo Dugga Maiki, Uma, Crisscross and Naqaab amongst various others.

The model turned actress made her acting debut with 'Champion'. She then starred in a television show Gaaner Oparey in 2011. The show paid tribute to Rabindranath Tagore on the 150th birth anniversary. It was in Bapi Bari Jaa that she made her debut into movies in 2012.

She worked in a few Telugu movies such as Sathruvvu, Jagapathi, Good Boy, Maharadhi, Yamadonga, Bhuma, Flash News, Edukondalavada Venkataramana Andaru Bagundali, Kalachakram to name a few. Her last movie was a Punjabi release titled Chhevan Dariya (The Sixth River) which hit the screens in 2010. She got married to Ravi Rana, an independent MLA from Badnera constituency in Amravati city on February 3, 2011.

Arjun Kapoor shuts troll who accused him of disliking Sridevi