Two national leaders of BSP have been bestowed with the responsibility to look after the affairs of the party in Rajasthan.

New Delhi: Bahujan Samaj Party supremo Mayawati on Monday dissolved party's Rajasthan Executive Unit. The decision was taken after, in a big jolt to the BSP, its all six MLAs of Rajasthan Assembly, belonging to Bahujan Samaj Party, joined the Congress on late Monday night.

"Based on the directions of BSP chief and former Uttar Pradesh Chief Minister Mayawati, the Executive body of the party in Rajasthan state has been dissolved," a statement from the party said.

The statement further read that two national leaders of the party have been bestowed with the responsibility to look after the affairs of the party in the state. "BSP chief Mayawati has directed National Co-ordinator Ramji Gautam and former Rajya Sabha MP Munquad to oversee the proceedings in the state," the release said. 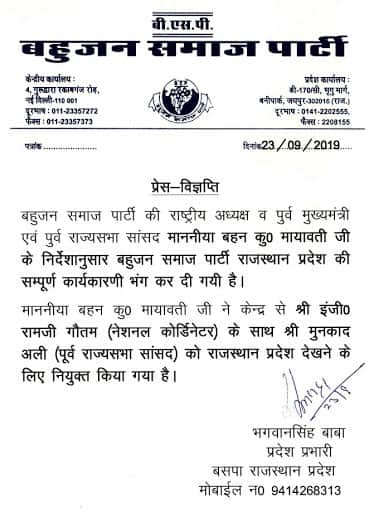 Rattled by the development, Mayawati lashed out at the Congress party, calling it a 'betrayal' by the untrustworthy and cheat. "Congress party in Rajasthan has once again proved that it is irresponsible and cheat party by breaking all the six BSP MLAs. This is a betrayal with the BSP movement and it is done when the BSP was supporting Congress in Rajasthan from outside," she said in a series of tweet.

In another tweet, Mayawati said that instead of fighting its bitter opponents, Congress always hurts those which provide it support and cooperation. "Congress is a party which is against people belonging to Scheduled Caste (SC), Scheduled Tribe (ST) and Other Backward Castes (OBC) and has never been serious and honest in matters of providing Reservation to these castes," she said.

The BSP chief further accused Congress of remaining in opposition to the ideals of humanity propounded by Baba Saheb Dr. Bhim Rao Ambedkar. She said, "It is because of this reason that Ambedkar had to resign from the post of the country's first Law Minister. The Congress never let him get elected in the Lok Sabha nor gave him Bharat Ratna. It is very disheartening and shameful."